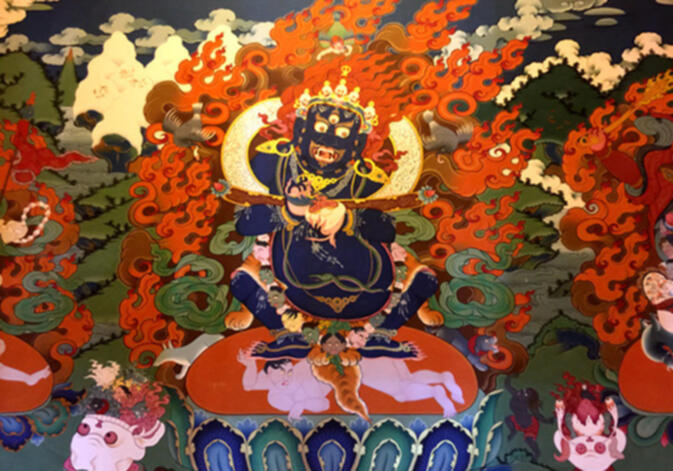 A museum in far northwest Yunnan received a bit of international attention on June 22. At the opening ceremony of the Shambhala Kalachakra Altar (香巴拉时轮坛城) in Shangri-la (香格里拉), a representative of the Guinness Book of World Records verified the center's collection of handmade Buddhist thangka scrolls as the largest in the world.

Thangka paintings are a traditional form of Tibetan textile art, often depicting images of the Buddha, lesser bodhisattvas or scenes from daily life. They are typically made of thick cotton or silk and decorated with both paint and appliqué flourishes. The Shambhala Kalachakra Altar contains 1,699 such works of art, which Guinness representative Gulnaz Ukassova certified set a new record for the exhibition of thangka on Monday.

The Guinness recognition was part of a larger ceremony officially opening the venue to the public. It reportedly cost 500 million yuan (US$81 million) and ten years to gather artifacts and complete the building. Much of that time and money was spent assembling the thangka collection, as well as an accumulation of 2,000 other "Tibetan cultural relics".

However, the most expensive feature of the center is an eight-meter high, 14-meter wide gilt statue illustrating stories and characters from the annals of Tibetan Buddhist history. It was constructed by Tibetan artisans using traditional forging techniques and required 15 kilograms of gold to complete.

Six category one national historical relics dot museum exhibits — some of which date back 500 years — and a 21-meter tall statue of the Buddha was purpose built for the venue. At an earlier ceremony held May 28, the eleventh Panchen Lama Gyaincain Norbu consecrated the building and gave it its official name, which he took from the esoteric Tibetan concept of Kalachakra, which among other things is concerned with time and timelessness. He was not, however, in attendance for the Guinness award presentation.

Government officials in Shangri-la hope the Shambhala Kalachakra Altar will help attract more visitors to the area. Much of the city's old town, Dukezong (独克宗), was destroyed when a 14-hour blaze broke out in January 2014, razing hundreds of homes and businesses. At the opening ceremony, Shangri-la Minister of Propaganda, Lu Zhijun said he believed the museum and its historical collection would revitalize the city's depressed tourism sector.

Here's another Guinnes Record, set recently in Kunming (which I heard nothing about until a week ago).
www.wanda-group.com/2015/latestnews_0520/923.html

Now THOSE (the thankas) should be something to see!