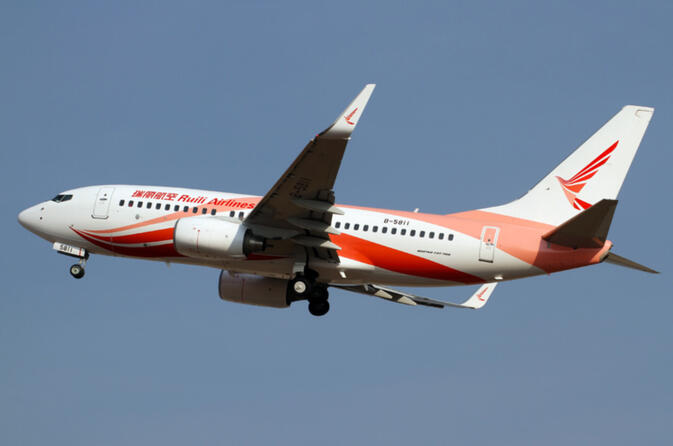 A tiny airline start-up based somewhat improbably in a Yunnan border town often referred to as 'China's Wild West', is looking to expand, and rapidly. Ruili Airlines, which currently operates a fleet of just five aircraft, announced plans this week to spend 37.2 billion yuan (US$6 billion) on new planes manufactured by American aerospace conglomerate Boeing.

The announcement came on May 18, the same day the airline celebrated its second anniversary, signaling the fledgling budget carrier has its sights set on extensively expanding upon the 15 routes it currently flies out of Kunming Changshui International Airport. The company plans to acquire 60 new Boeing planes between 2021 and 2025 with the help of two financial leasing companies.

The planes will all be a new version of Boeing's 737-MAX, a narrowbody model still under development. Worldwide delivery of the plane is not expected to begin until 2017 and Ruili Airlines will wait a further four years to receive its new jets.

In the meantime, the company intends to buy 21 other commercial aircraft between now and 2020, according to a report in South China Morning Post (requires proxy). Although the specific size of the planes purchased by Ruili Airlines was unspecified in news reports, the 737-MAX family of airplanes seat between 149 and 220 passengers in economy class only arrangements.

Ruili Airlines is independently owned and operated by Yunnan Jingcheng Group, a corporation founded in 1990 that is involved heavily in the mining, construction, real estate and hospitality industries in southwest China. Its aviation branch — in addition to operating limited flights across the mainland — is involved in the county's growing helicopter and charter jet sectors.

Jingcheng's president of aviation, Lei Cheng (勒成), said his company's looming purchase is intended to help Ruili Airlines establish secondary budget flight hubs in Chongqing, Chengdu, Guiyang and Nanning to supplement the existing one in Kunming. From these airports, he continued, the company hopes to remain competitive in the region's cutthroat aviation industry and possibly expand into Southeast Asian markets over the coming decade.

a nice budget to skim