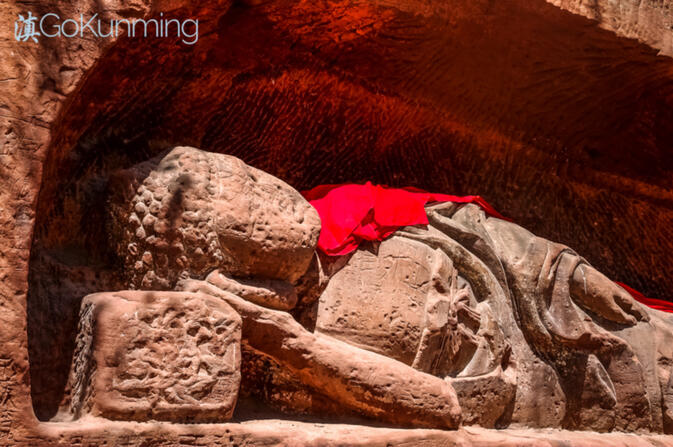 Yunnan is unique in China as being the ancient meeting place of three major Buddhist traditions — Tibetan Tantric, Theravada and the Chinese brand then permeating the Tang Dynasty. In the Nanzhao era — between the years 736 and 902 — the predominant Buddhist philosophy in what is now Yunnan, was a sect of Theravada, combining the other two, known as 'Acharya' from the Sanskrit "one who teaches by conduct". It was this hybrid philosophy that inspired the grotto carvings of Shibao Shan (石宝山) near Shaxi and possibly those much closer to Yunnan's capital city.

To discover that carvings of this era existed only 25 kilometers to the southwest of Kunming warranted some exploration. The grottos and carvings of Fahua Temple (法华寺岩石窟) are believed to have been the handiwork of stonemasons working during the Nanzhao era when Yunnan had yet to become part of greater China. The Southern Silk Road once passed through Yunnan and was likely the means by which Theravada Buddhism found a following in the countryside surrounding Kunming. 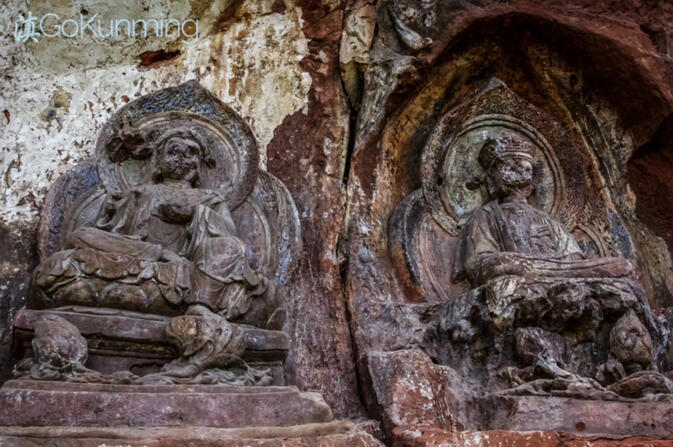 After checking out satellite images on Google Maps and the sparse online literature on Fahua Temple, we attempted to get there using public transport. We left Xiaoximen bus station one Saturday morning and took an hour-long trip to the lakeside Hundred Flowers Park (百花公园) in Anning. A low ridgeline with a sandstone escarpment is visible before entering the city, and it is home to the Fahuasi Grottos.

No buses went to the hills according to locals, so from the lake, a taxi driver took us to our destination. From our driver, we learned the temple at the base of the cliffs eight kilometers to the east of Anning was not exactly a tourist hotspot. Consistent with this, somewhat bemused park security checked us in at the visitor's office and sent us off up the hill. We were later to find that the 40 yuan cab fare was standard even though it was a mere five minutes out of the city. 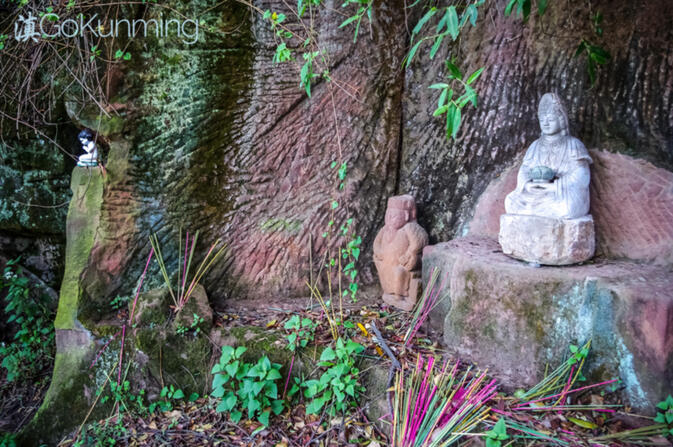 During the Cultural Revolution many of China's historical sites suffered devastating damage as they were thought to be at the root of "old ways of thinking" and thus counter-revolutionary in their nature. The widespread destruction was never formally sanctioned by the Communist Party but carried out zealously by some of the revolution's more enthusiastic followers.

Fahuasi, unlike the famous and more distant Dazu Grottos in Sichuan, fell victim to vandalism during the ten years of anti-religious sentiment. Red Guards removed the faces of bodhisattvas and other religious icons with the idea of removing the four olds — Old Customs, Old Culture, Old Habits, and Old Ideas. 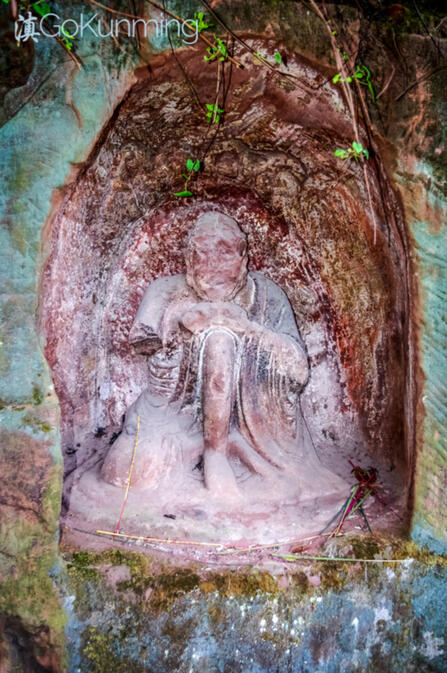 A monk in pastel lime green greeted us and said we could wander wherever we liked. The grounds were unkempt and the paths overgrown. Grass grew from orange tiles sheltering a statue of Guanyin and the place looked as though no one had visited in a long time. A path to the right of the temple passed through vine scrub up stairways to a small natural rock outcropping.

The sandstone is a fine-grained, rusty red color and has been chipped away into an overhang housing a reclining Buddha. The Buddha statue is a 4.25-meter carving, reminiscent of reclining statues we had seen in neighboring Laos. The immediate surroundings are a lush green of monsoon scrub and conifers but the ancient statue gazes out toward an expressway and industrial zone in sharp and ugly contrast. 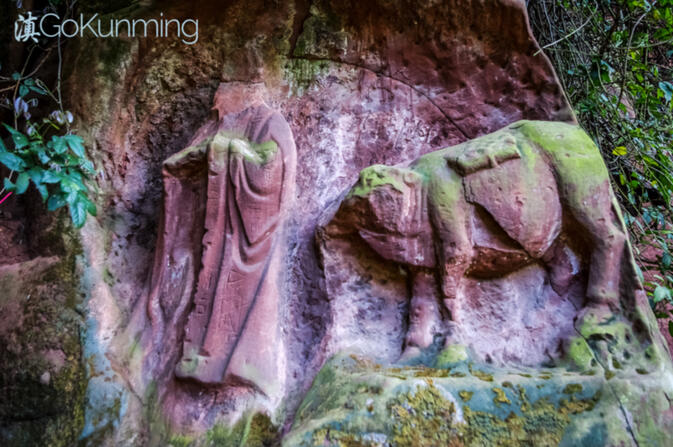 A path traverses the steep slope to the east and brings visitors to the Wall of Arhats — known in n Sanskrit as अर्हत्. Further along the trail a carving reminiscent of Lao Tzu and his water buffalo had been beheaded along with other unfortunate figures dressed in robes. It was sad to see the destruction of such ancient cultural relics.

From the Arhat Wall, the path winds up through scrub and vine thickets towards the top of the escarpment. Years of traffic and water flow has worn the path into furrows of smooth red sandstone. White rhododendrons in bloom along with other wildflowers make for beautiful contrast with the bright green of oak and Chinese yew trees. 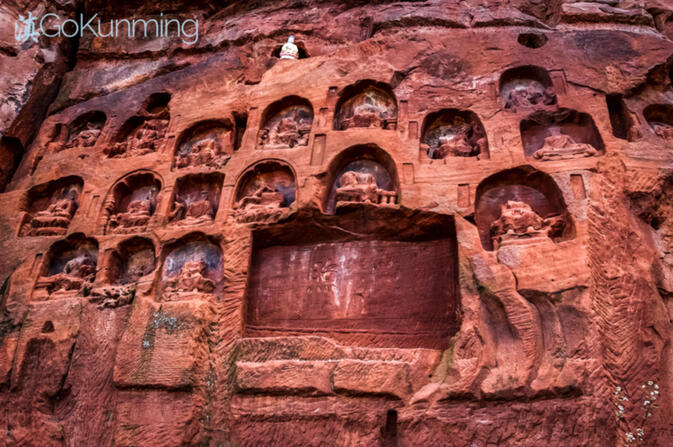 Near the top we found a series of half-meter gauge pipes which we later learned are used to transport quarried sandstone rich in salt to a processing plant in the valley. It became apparent that this same rock is the source of salt in the famous salt village of Heijing in nearby Chuxiong County.

At the crest of the ridge is wide open space with a yew tree at its center and a black dragon statue framed by a big blue sky. Beneath the tree sits a gold colored Buddha and a white Guanyin statue resembling the Virgin Mary. It seems a strange arrangement being neither ancient nor at the top of the highest ground. On returning to the temple proper we found the monk working on his calligraphy. He had lived there alone for 13 years as a devoted guardian of the fallen cultural relics. He gave us some fruit and bid us farewell with directions to the nearest local bus stop. 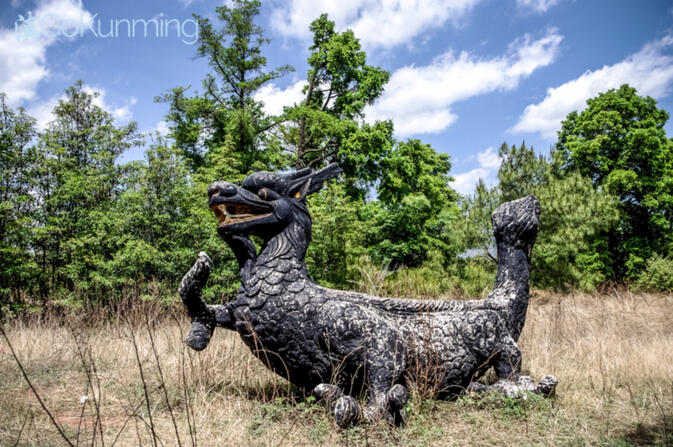 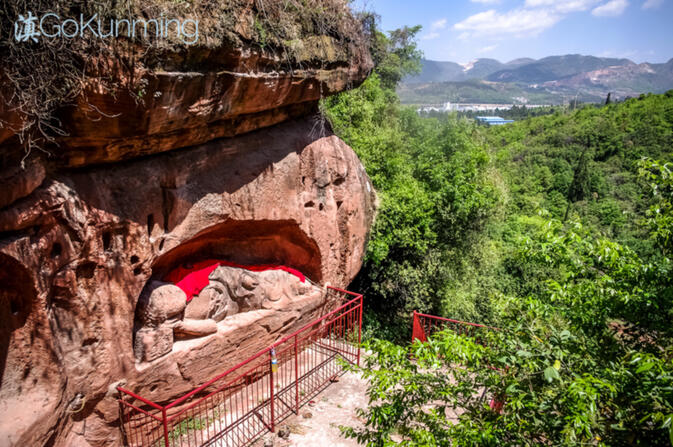 Thanks. Nice travelogue. Bern to various grottoes great and small. Both large and small showing what a couple of hundred years of weather and vandals does to the head of carvings. Even though the small ones like this aren't as impressive, I find them more peaceful and always tended by a humble monk or two. Haven't been to this one, but should make for a great cycle.

A year or two ago there was a story in one of the Chinese newpapers that there was some mining going on there, more or less completely in disregard of the area. Well, does that surprise...

Nice writeup but factually inaccurate - there was not a [single] 'Chinese brand [of Buddhism] then permeating the Tang Dynasty'.

See en.wikipedia.org/wiki/Template:Buddhist_traditions_timeline for an overview of the emergence of Buddhism's various traditions.

At a minimum, Chan, Tiantai and Chinese Vajrayana (Tangmi) were all well established in China, Tibet had multiple traditions, and Theravada was in the south from Mon missionaries from circa 8th century or earlier.

In different parts of the Tang, the area around Anning was variously controlled by Nanzhao (Yunnan's local empire, lost to history) or (later) the Chinese Tang Dynasty.

It is important to note that Nanzhao used Sanskrit (affiliated with Mahayana and Vajrayana traditions) for some religious purposes, rather than Pali or Chinese, though it did also use Chinese. However, Nanzhao would have been familiar with Sarvastivada/Theravada traditions from the Mon and possibly via Tibet. They definitely had contact with the Pala kingdom, a Buddhist kingdom centered around what is now Bangladesh whose history is unfortunately obscured by the fact that much of its past has been sold or destroyed by modern day religious zealoutry, overpopulation and extreme poverty. There is a great scroll in the National Palace Museum in Taiwan from Nanzhao that shows black-skinned people with topknot hair visiting Nanzhao's court.

About Shibaoshan - the interesting thing about those grottoes behind Shaxi (on what is allegedly the old road from Dali to Lijiang, and only slightly south of the first curve in the Jinshajiang or upper-Yangtse, and right next to an ancient site of intensive rice agriculture that is only now being excavated - Jianchuan) is the presence of underniably Hindu 'yoni' (essentially oversized female genatalia cut out of solid rock), whereas there appears to be only Daoist and Buddhism themes in Anning.

The mountains near Qingzhou (the old capital of Shandong) also have some excellent carvings I can recommend visiting.

I have been here about five times over ten years. The gate and guard are part of a fire prevention program. The monk there told me on my visit visit that I would live to be 103. For a practicing Buddhist it is a calm reflective spot.