Walking in Qujing, or Why my legs didn't work last week 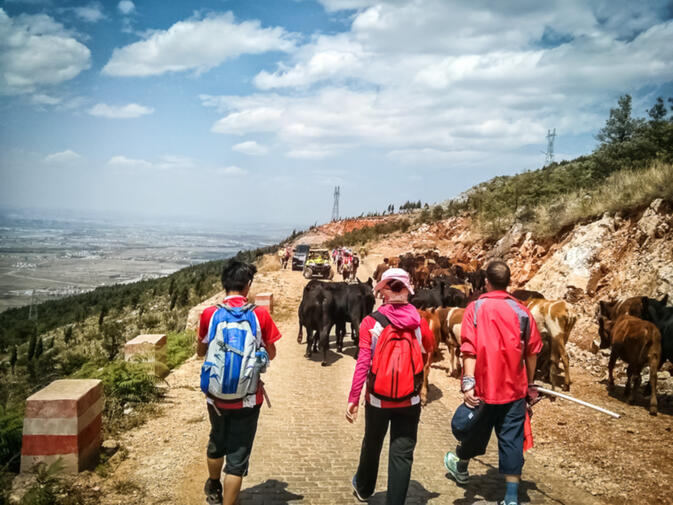 I completed my first marathon last month! And my second! Well, sort of. I've been training seriously for a couple of months, looking forward to either the Shanghai Marathon in November or Hainan in December, but I'm still a long way from being able to run a time I would be happy with. But when I arrived back in Kunming after a weekend in Guiyang watching elite runners, all jazzed up on training and cheering, I got a text from my friend inviting me to join a 100-kilometer walk over Tomb Sweeping Festival.

We would take the train to Qujing on Saturday, then hike all day Sunday and Monday before jumping on a train back Monday night — which meant we would have to carry anything we brought along the whole second day. Not a particularly relaxing way to spend the holiday weekend, but definitely not a chance I could pass up. Qujing is the second-largest city in Yunnan and is just an hour and a half away by train, plus I'd never been there, so I signed up almost immediately.

Unfortunately, that wasn't fast enough. Although the deadline was March 31, and we submitted our materials the day before, apparently the guy who was organizing our group didn't actually pay the entrance fee, so we were told that we couldn't actually attend. After meeting with the director and begging a little, we were told that we could join, but not officially. Which basically meant that they were okay with us walking alongside everyone else, we just wouldn't get a t-shirt or certificate.

Fine with me, I don't need a piece of paper to tell me that I walked a really long way. Our group of nine consisted of three other pretty athletic guys, one athletic woman who was my walking partner, and four women who exercise rarely and decided to go along for the fun of it. Most of them didn't expect to make it through the whole thing, but wanted to try anyway, which I thought was great! We joined about a thousand other walkers, of which I was the only foreigner. 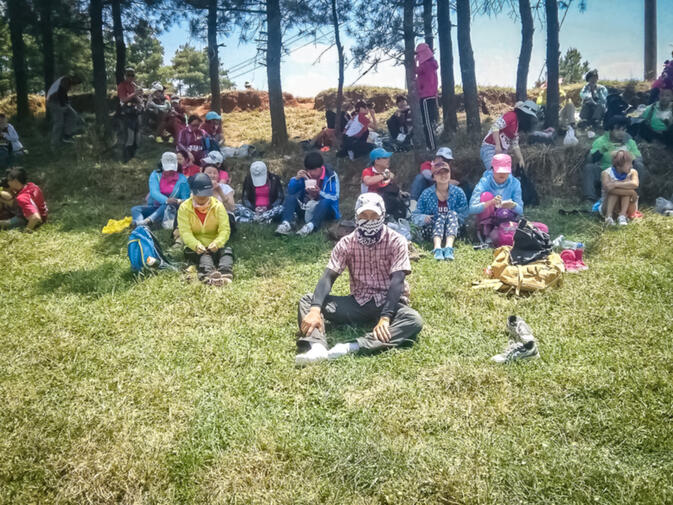 I've read a few books by ultramarathoners, and for someone who has never attempted more than a half marathon, the distances are always a little difficult to grasp. What the heck does it even mean for someone to run 100 kilometers? I can picture that distance... I can even think of it as four times farther than I've ever run before. But it's impossible to put the effect it has on a body into perspective. Well, after last month, I have a bit more of an idea about what it's like, and let's just say it will take some convincing to pull me in any further.

Obviously running and walking are very different, and put stress on different parts of the body. I've always thought of walking as much less difficult and stressful, which of course it is, physically. However, I drastically underestimated the mental difficulty. When I'm running and I get really tired, I can pull myself through that last five kilometers by thinking "only 20 minutes to go, then you can collapse." But when you're walking, that last five kilometers is another damned hour that you have to keep moving! Plus, because less adrenaline is flowing and you're not so concerned about your finishing time, every painful problem your body has developed gets its signals through to your brain, clear as crystal.

The first day passed pretty quickly and easily. We walked up a big hill with some nice views near the start — the peak was around 2,300 meters after maybe a 600-meter climb — then down, and we were already just ten kilometers from the end. Spirits were pretty high, I didn't have to deal with anything beyond just normal tiredness, and our entire group finished.

Only four of us started the second day though, and about halfway through, with 25 kilometers left to go — that's four more hours, aaaaaack! — I started to get some more serious twinges in my right shin and knee. With a big downhill coming up, I knew the rest of the day wasn't going to be fun. Luckily, I had my friend Ana next to me, matching my pace even though she's at least half a foot shorter than me and rarely walks more than ten kilometers. If she could finish, there's no way I could drop out! 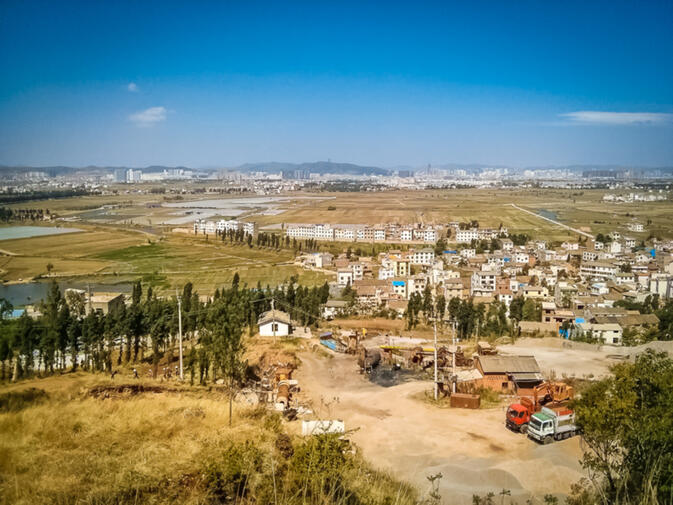 We made it down the mountain and started pushing toward the finish line back in the middle of the city, a little unsure of how far we were from the end. At this point, we were getting a little concerned about finishing in time to catch our train, which was due to leave around 9:20pm. The sun was almost down, the course was getting hard to see, and we just kept on walking, well beyond where we thought it should have ended.

Finally! We found some roads we recognized from the beginning and turned into the final straightaway, cheering, only to find our route to the finish blocked by a group of two hundred dancing grannies. They had set up the finish line in the middle of the main square, and unfortunately right in the spot where the grannies dance every night. We picked our way through, avoiding flailing arms and legs, and stumbled across the finish. Ten minutes of rest and stretching and we were in a taxi on the way to the train station. We caught our train with a good half hour to spare, although I can't say sitting on a smelly, cramped train was the best way to cool down!

The weekend itself reminded me of a few things that I love and hate about living in China. Warning: this part could get a little ranty... but I'll try to temper it. I want to mention that I am very glad that I did this, both for myself and as a way to get closer to my new friends and see a new place. However, as I've seen with most of my experiences here, what ended up being decent could have been far better with a few simple tweaks.

First of all, the company that organized this has been doing similar things for the last ten years, so they should know what they were doing. However, they consistently made simple mistakes. For example, the 100 kilometers was split up into 41 the first day — which they called 45 — and 57 the second day — called 55. Not only was their measurement way off, but they chose to put the longest day last. If you're going to split it unevenly, at least put the long day first so we don't have to do 57 kilometers when we're already tired from the day before! 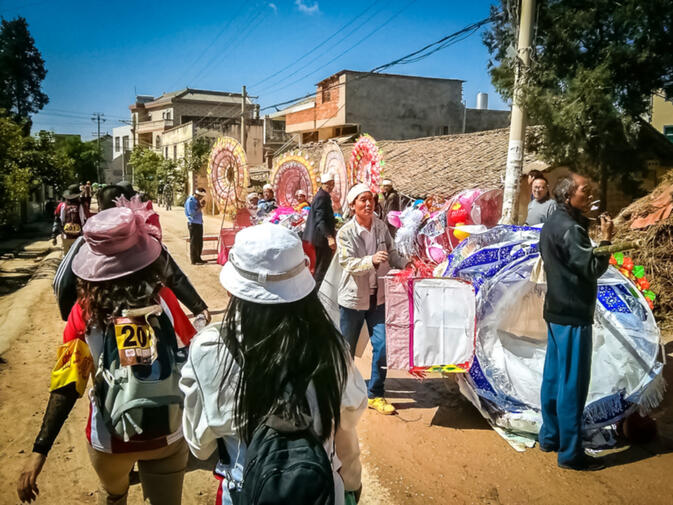 Secondly, the first day started thirty minutes late, the second day almost an hour. Normally that would just be frustrating, but in this case it was a serious problem because the walk was so long. We started just before 9am and most finishers took at least 11 or 12 hours, which left a bunch of people walking on busy, unblocked streets in the dark, trying to find their way to the finish via hard to spot signs.

Finally, there was the traffic. It seemed like each team doing the race had a support car following them, except us, since we weren't actually in it. These cars had typical Chinese driving habits. More than once, I had to yell at a car that was honking incessantly, trying to squeeze by the very walkers it was ostensibly trying to help. Most of the course was on small roads, which made it easy to follow but incredibly annoying, because we were constantly jumping to the side to let cars pass.

Luckily, through it all, there was the incredible enthusiasm and friendliness of the other walkers. Being the token foreigner, I probably got a slightly skewed view of this, since everyone was super excited to see a white guy in their little village — so excited that I made the local newspaper. I probably received more jiayous than I gave out the previous weekend in Guiyang, and every time I passed someone they would give me a big smile, a thumbs up, and a ni tai bangle! (你太棒了!).

I found it funny that they were so proud of me when there was a little Chinese woman right there with me, matching me stride for stride, but hey, who am I to argue with congratulations? Once again, I took far more pictures than I ever expected to, as every team had to come over and take a picture with the foreign devil. This was a lot of fun until about the 80-kilometer mark, when people were still swarming me at aid stations to get a picture. But even though I was hurting, it cheered me up, because they had gone as far as I had and they could still manage to smile and laugh.

Editor's note: This post was submitted by Kunming resident Dan Gerber. If you'd like to see more of his writing, check out his blog The Rest of the Book (requires proxy). If you have a story you'd like published on GoKunming, don't hesitate to get in touch.

lolo. the car story is funny, honking at the walkers!

in dali old town when the electric scooters honk me to go faster while the driver does nothing except pollution, i honk back at them.

I did read the whole thing this time! AWESOME ME!!