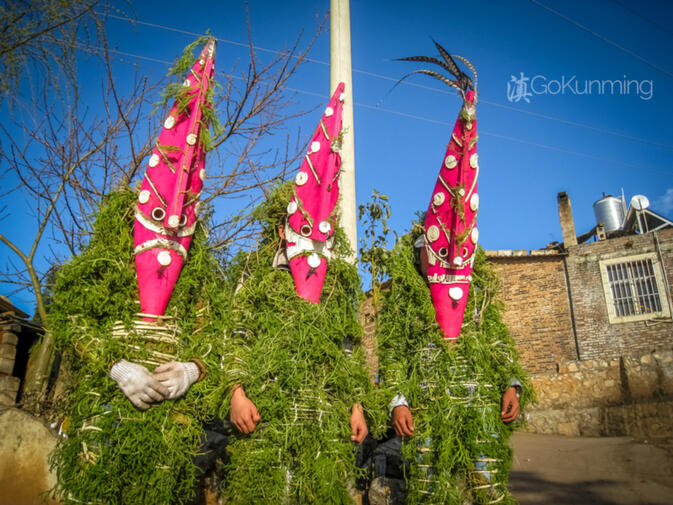 "Do you want to see the forest men?" My Chinese friend showed a pic on her cell phone. A man appeared to be covered with leaves. Intriguing. "Would you like to see the green men?" Well yes, of course. As with so many adventures in China, I had little idea what I was getting myself into.

Sandi and I drove out of Shizong (师宗) in eastern Yunnan, arriving in half an hour at a small village named Duza (堵杂). A windy place, wind turbines festooning distant ridges. Two turbines rose above the village, which sat on a hillside a short distance from the main road. People were gathered on a knoll. We walked over and there they were, green men as well as green boys. 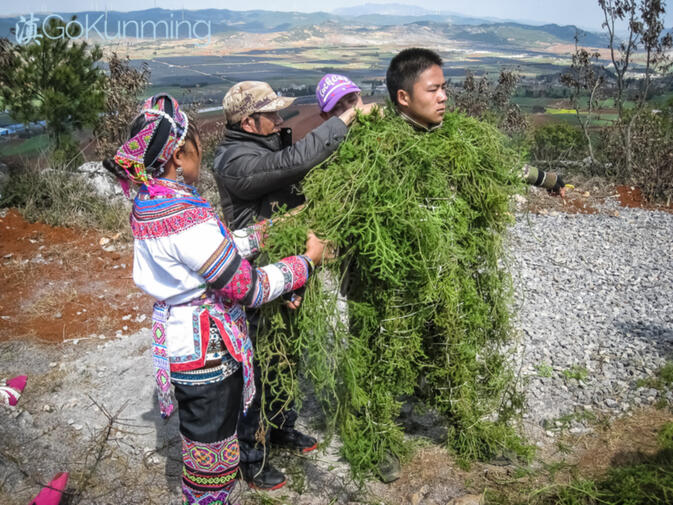 There were forty in all, I guessed, ranging in age from eight to fifty. Villagers were helping them into costume, placing quantities of greenery on their bodies and binding them tight with vines. It was moss on the men, sphagnum moss, not leaves or branches as I had originally thought. The costuming took hours. When done, the green men donned masks — enormous, elongated red coverings that made them look monstrous.

Sandi had seen them before because she had spent part of her childhood in an adjacent village. Once a year, on the second day of Spring Festival, the men put on their forest fringes, entered each house in the village and performed a special dance. I wondered, why were they all men? Sandi explained the tradition — on the second day of the festival women are forbidden from entering a home other than their own, else it would bring bad fortune for the year. She also explained the village was an Yi minority (彝族) one. 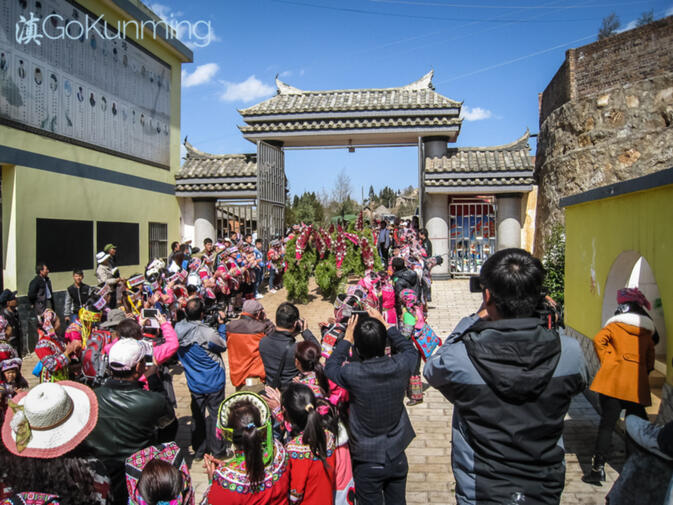 Once in costume the men are called bang shanhuazi (绑山花子), or simply shanhuazi. The literal translation is "bound-up mountain beggar". Sandi thought the phrase had originally come from the Yi language and meant something closer to "mountain monster".

While the villagers continued the costuming, Sandi and I walked to the top of the hill to visit her cousins. Beneath an enormously tall telecommunications antenna, they lived in a simple house raising crops and animals. A well in the courtyard provided water. In the center of the living room a large screen TV sat perched, while adjoining, sparsely furnished rooms, held the kitchen and bedrooms. 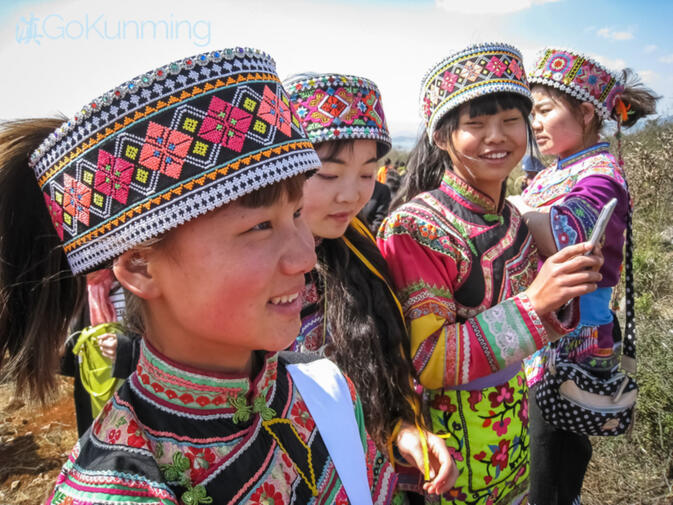 I stole upstairs to discover what I would see and found enormous piles of dried corn. An adjacent stable housed ox and pigs, and chickens squawked about. Several relatives were visiting and a grandson enjoyed blowing soap bubbles all around. When he started blowing them into the well he had to be reprimanded. Together we ate a meal of potatoes and cabbage. For my sake, the cooks were kind enough to prepare some food without so much spice.

Sandi's cousins were not Yi people but still they expected the forest men to appear later in the afternoon. They would perform a dance, just like in all the houses of the village. But first, we left for the public ceremony. Descending to the village square we found a crowd numbering perhaps five hundred. The shanhuazi entered the square running and cavorting chaotically before going up onto the elevated stage. As they waited for the ceremony to begin, many removed their red masks, probably because they were heavy and hot. 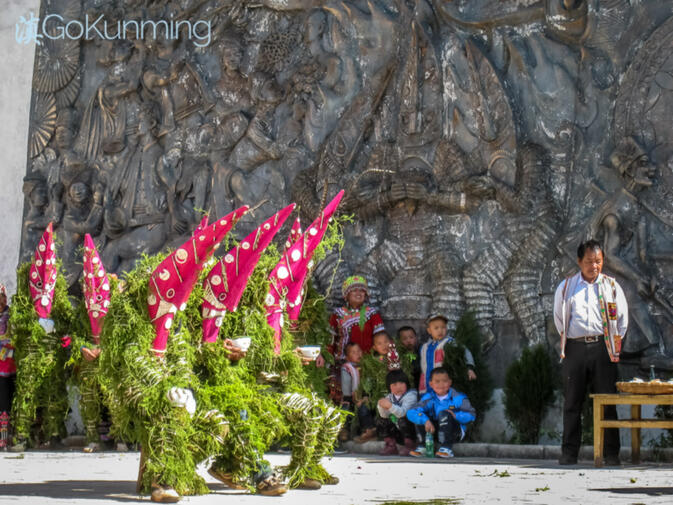 Speaking of uncomfortable, Sandi thought the green men must needs to refrain from eating and drinking. Their bodies were bound so tightly in vines that making a bathroom visit appeared out of the question. I myself felt constrained when I visited a public toilet in the village, the tiniest I had ever encountered. I had to remove my daypack to worm through the entrance into the claustrophobic cubicle.

Finally the public ceremony began and it was surprisingly short. Three of the shanhuazi took center stage and after a crude blast from horn-like instruments, an announcer made a proclamation. An offering of unknown substance was given to the green men, some of which was tossed into the air. Then they performed their stamp dance. Shoulder to shoulder, the men swayed rhythmically at the knees and stomped their feet three times in unison. On the third repetition they turned 180 degrees in a line as they stomped. A few more stomps and they were done. 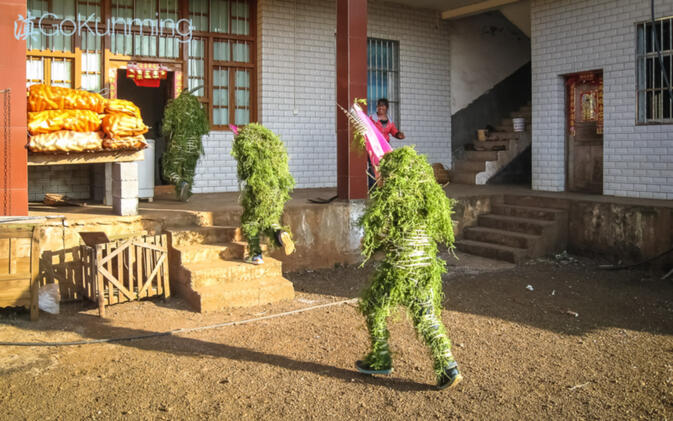 We went back up the hill to Sandi's cousins to await the shanhuazi, but after a long time they had not appeared. Disappointed, we descended to the village before returning home to Shizong. I began to fear I would never see the stomp dance performed in an actual home. In the village we found some of the green boys, still in costume, but they declared themselves unqualified to dance.

Then, by a stroke of luck, we caught sight of three men in full costume. We followed them to their next house, and upon entering the owner presented food offerings. This was thanks for the blessing which the dance bestowed for the coming year. The shanhuazi joined together and stomped. It was all over in a couple of minutes, and then it was on to the next house. They appeared exhausted, not surprising given how they had worn moss for as long as six hours and had been dancing for nearly half of that time. One of them labored to carry an enormous sack of food offerings.

Sandi told me Duza Village is the only place in China that carries on this tradition. I felt
grateful to have experienced it.

Editor's note: This article was submitted by contributor Pieter Crow. For more on the history and traditions surrounding the 'shanhuazi', click here. If you have a story idea or photos you think GoKunming should publish, we'd love to take a look. Get in touch with us through the contact form. 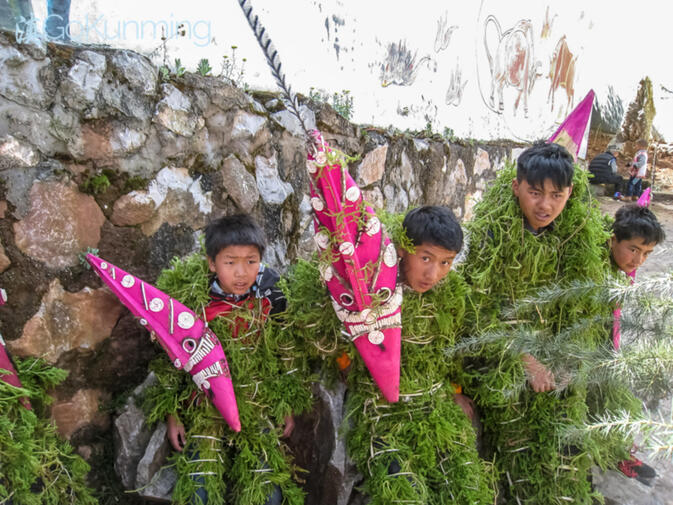 Would be interesting to know why they do this.

Maybe their is some significance in the plant they are using. It appears to be (Lycopodiopsida) or club moss rather than Sphagnum spp.

@Haali: I'll bet there's more to it, though it may have been bent by tourism interests.
Jim Goodman would know.