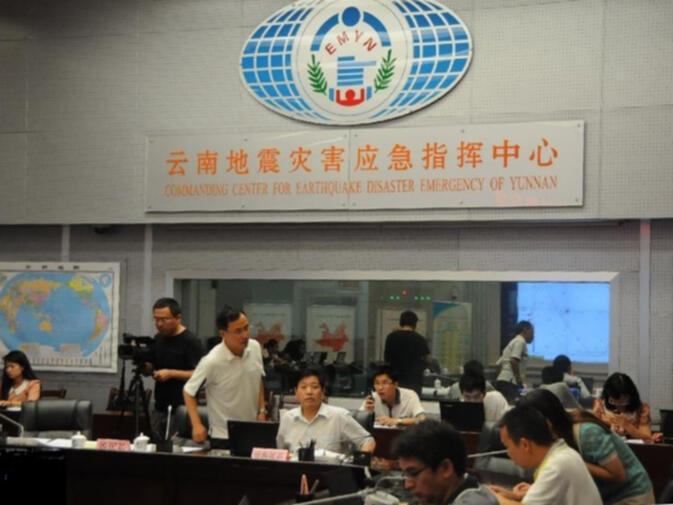 A moderate earthquake hit Songming County in central Yunnan on March 9. The temblor caused little noticeable damage, but was felt by many in Kunming. Instead of the usual litany of injuries and property destruction common to state media reports following such events, news outlets have focused on urging people living near the epicenter to remain calm.

The Yunnan Seismological Bureau (YSB) reported the quake was of magnitude 4.5, with its epicenter roughly 50 kilometers northeast of Kunming. It struck at 5:59pm local time, sending people running out of their apartments and workplaces. Beyond spooking many residents in Songming and Kunming, the only major disruption reported so far was to railway traffic.

Train service in much of Yunnan was temporarily suspended following the temblor, as railroad workers checked tracks for any signs of damage. Many trains into and out of Kunming, Qujing and other, smaller cities near the quake zone ran up to four hours late. Regular schedules were resumed Monday night.

Although earthquakes are a common occurrence in Yunnan, one hitting so close to Kunming is atypical. Zhang Junwei (张俊伟), a seismologist at YSB, told China News Network that the province typically experiences three or four earthquakes with a magnitude greater than five on an annual basis. Smaller tremors, such as the one in Songming, occur, on average 10-20 times per year, and minor quakes that people rarely notice happen up to 200 times.

Keeping with the theme of staying calm, Zhang went on to explain that while magnitude 4.5 earthquakes certainly feel scary, they are rarely cause for alarm. "Many in high-rise buildings felt this quake, but they shouldn't panic...buildings [especially] in Kunming are built to [Chinese] seismic standards."

Assurances of structural integrity aside, the intensity of Monday evening's earthquake, no matter how short-lived, reminded people in Kunming and Songming that they are not immune from tremors which routinely shake the province. Oddly, beyond the repeated 'Don't panic' mantra, news reports rarely suggest how to prepare for a quake.

Recommendations generally include making an emergency kit that includes food and water, flashlights, a first aid kit and many other necessities. The United States government also recommends planning in advance how to contact or meet up with friends and family in the event of a disaster.

The only ones who should panick are school children and teachers or anyone else working in a school.