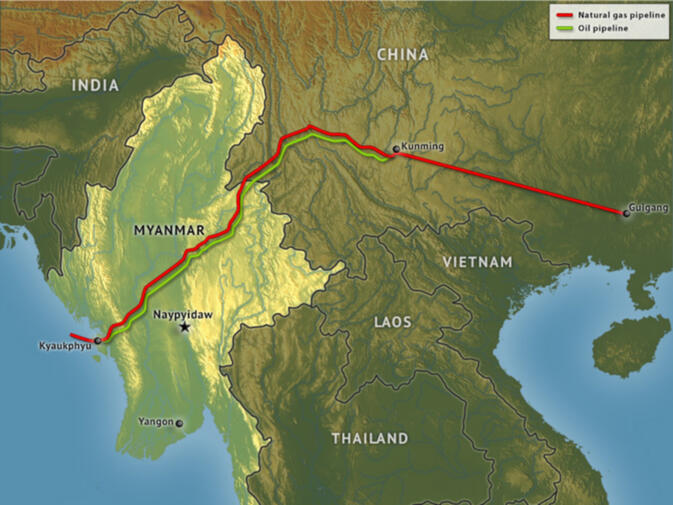 Editor's note: This article was originally published based on two external news sources, both of which turned out to be erroneous, and both of which have subsequently been taken offline. We sincerely apologize for our own factually incorrect article. A fully updated version of this story — current as of April 11, 2017 — can be found here.

A 771-kilometer long oil pipeline linking refineries in Kunming to oil fields off the western coast of Myanmar began shipments over the weekend. Built over six years, at a cost of 9.37 billion yuan (US$1.5 billion), the project was marred by controversy in China and, at times, violence and threatened cancellation in Myanmar.

An opening ceremony held in the Burmese city of Yangon on January 29 marked activation of the above-ground crude pipeline. It travels from the Andaman port of Kyaukpyu, through the Chinese border town of Ruili and on to Anning just west of Kunming. The inauguration was attended by Liao Yongyuan, general manager of China National Petroleum Company (CNPC), and U Nyan Tun, vice president of Myanmar, according to a report by website The Nation.

The pipeline is jointly owned by Myanmar Oil and Gas Enterprise and CNPC, with the latter controlling a majority stake of 50.9 percent after having financed most of the construction process. When operating at full capacity, the pipeline is designed to transport 22 million tons of crude oil into China each year, a total nearly double that reported when work on the energy conduit first broke ground in 2009.

Named after seabed fossil fuel deposits off the Myanmar coast, the Shwe pipeline runs parallel with a similar natural gas conduit that went online in 2013. First proposed in 2004, the twin pipelines were conceived in China as a way to bypass oceangoing tanker shipments of crude oil and natural gas from not only Myanmar, but also the Middle East and Africa.

Now that both pipelines are open for business, Southwest China will receive fossil fuels from countries to its west much more directly. Sea-bound shipments not only take significantly longer than those through the pipeline, but must also pass through the nominally United States-controlled Strait of Malacca — one of the busiest ocean shipping lanes in the world.

As with many Sino-Burmese infrastructure projects, the twin Shwe pipelines were not guaranteed to ever be finished. Construction was nearly halted in 2012 when Burmese parliamentarians threatened to mothball the project over environmental concerns, reported labor strife and claims of forced village relocations. On the Chinese side, well-publicized Kunming rallies against a refinery-related petrochemical factory also brought the future of the pipeline into question, at least momentarily.

Will be interesting to see the effect of this on pollution in Anning and Kunming, if any, which was the object of a demo last May, and to hear more about the environmental issues that were of concern in Myanmar.
And in what sense are the Straits of Malacca 'nominally United-States controlled'?