Yunnan Drifter: Rebels with a cause 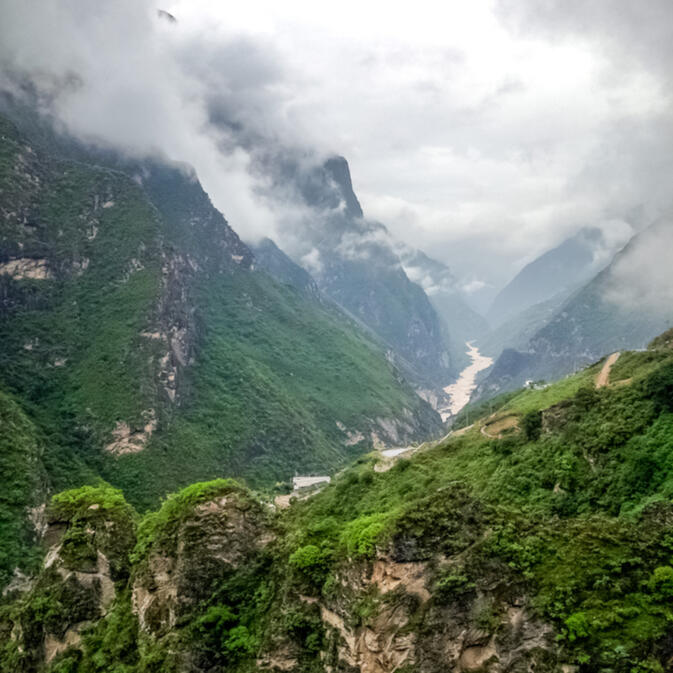 Editor's note: Over the course of the next few months, we're going to try something new — serializing portions of an upcoming book about our favorite province. The following is an excerpt from "Yunnan Drifter: An Alternate Guide to Traveling in Yunnan", a book written by Lisa Liang and edited and translated by Lua Zhou.

There's a narrow, windy road going up into the mountains not too far from the main entrance to Tiger Leaping Gorge. A sign that reads shijiazhuang (食佳庄) — or roughly "good home cookin'" — marks the entrance to the road. It goes up and up, twist after turn, on a path barely wide enough to fit a small-sized car.

Luckily, we're on motorbike, and Lil' Red especially likes narrow mountain roads. The only thing is, we're running low on petrol, and it's not great going up a long, steep hill with barely any petrol. Even more unfortunately, we're sort of on this road in the first place because of the park patrol officer who's on our tail.

Normally we would arrive to Tiger Leaping Gorge after 7pm, when the ticket booth operators have all gone home, because then you can get into the "park" for free — otherwise, it's 65 yuan. But for some reason today we've arrived around noon, perhaps a little too eager to get to Sean's Guesthouse (山泉客棧) for one of his pancakes. We decide to try our luck anyway, hoping the guard is off eating lunch or not paying attention to the road. After all, we're coming from Haba Mountain, and we reckon not too many visitors come from that direction. In fact, maybe there would be no guard at all. 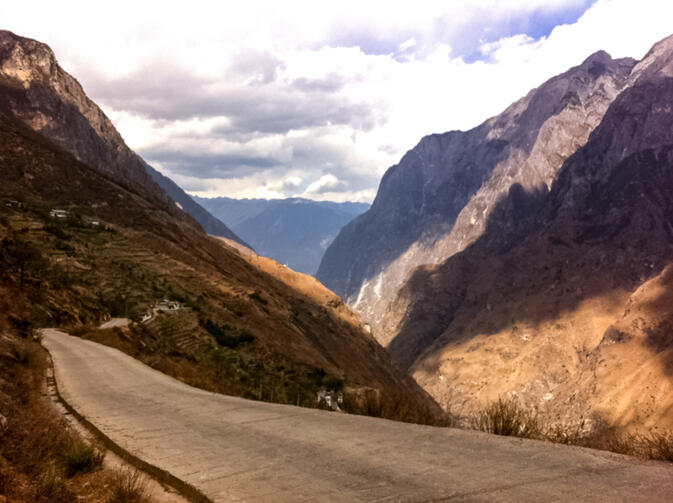 We approach the entrance of the back gate. There's no barrier so we blast through at full speed, just fast enough to catch out of the corner of the eye a man in a uniform yelling in our direction and waving a paddle with a big red X. We continue on regardless, silently convincing ourselves we didn't see anything at all. We make a beeline for Sean's.

We get to Sean's and Sean is there, grumpy as usual. He grunts at us when we say hello and goes immediately back to his computer, cursing under his breath, pissed off at the guesthouse website for acting up. And, well, let's face it — it can't be easy for a one-armed middle-aged Naxi man to operate a computer.

In walks his pretty young wife — his fifth or sixth, rumor has it. She greets us with a smile and says, "Hey, longtime no see. Welcome back."

I'm in the middle of trying to decide between apple and banana when the phone rings. Sean's wife picks up. She looks at us with inquisitive eyes, nodding and muttering a few uh-huhs. She hangs up and says, "That was the guard. You guys didn't buy tickets?"

We squirm a bit and shrug our shoulders. Sean's laugh rings through the room. "You guys gotta go back and buy tickets," says his wife.

"Well...let's have pancakes first," I say. "We want apple and banana, one of each." She hesitates for a few seconds, then nods and goes into the kitchen. We put our helmets down, take a seat and pour ourselves some tea, when whaddayaknow? In walks the guard in a bit of a huff.

"You guys didn't buy tickets," he says after he catches his breath. The room goes quiet. I can hear my heart speed up.

"Yeah, uh, we're on our way to Daju (大具)," I finally manage to spit out. Daju is a town across the river a few kilometers back from the direction we came. "We just wanted to come to Sean's first for a quick bite to eat."

The guard's eyes turn to Sean, who's grinning ear to ear like he really wants to see how this whole thing goes down. Meanwhile, my heart is pounding so fast you'd think I was trying to get away with murder. I don't know why I'm so nervous. It's not a big deal, really. It's only 65 yuan.

Then add up all the other tickets and tolls all the other places are charging, and the amount quickly builds up to something quite ridiculous. The fact of the matter is, we just don't want to buy tickets. To anywhere. Period. It's a matter of principle, really. Not just because we disagree with profiteering off natural wonders. And not just because maybe we feel a slight sense of entitlement, having lived in Yunnan for a combined 15 years. It's also because there is simply no other road for us to take — we are given no choice but to take this road, and if we take this road we have to buy tickets. It just doesn't seem right. 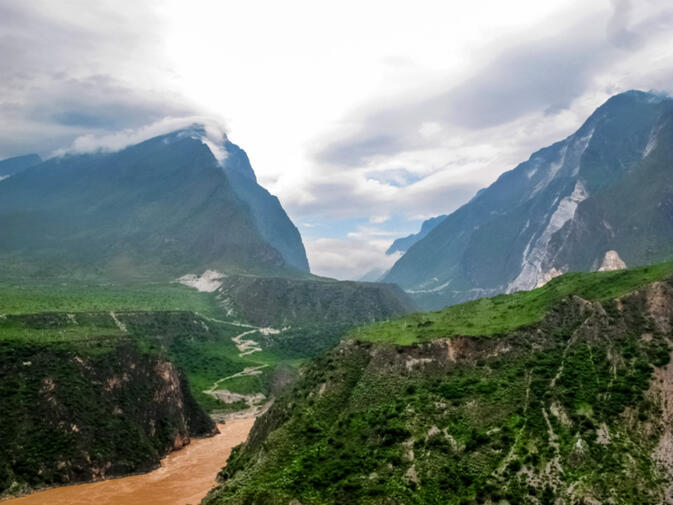 And so the showdown at Sean's continues. I do my best to maintain my composure while the guard darts his eyes back at us, back at Sean, then back at us again.

"Well," he finally starts, "OK. If you're just here to get a bite to eat...if you're going back out and will be on your way...just give me a head's up when you leave, OK?"

I can feel myself beaming from head to toe with a strange sense of pride. Sean must have been amused too because he breaks out in hysterical laughter. His wife still insists there's no way we're getting around paying that toll, but little does she know how determined we are.

We eat our pancakes slowly, and then we get back on the road, but heading not in the direction we had promised. Instead, we head the opposite way, towards the main entrance, even though we know the main ticket booth won't be easy to slip past, especially now that the guards are on the lookout for two delinquents on a red dirt bike. Unfortunately we have no choice. We need fuel, and the only gas station lies just on the other side of the main entrance.

We're almost at the gate, and taking our sweet time to get there, anticipating either being forced to hand over money, or possibly even banishment. And then we see it — a turnoff onto a small road a few kilometers before the gate. On a whim, we turn onto it and start heading up the hill, thinking no way would any guards come looking for us up here. We're just crossing our fingers we've got enough petrol to get all the way to the top, all the way up to the Naxi Family Guesthouse (纳西雅阁).

To our delight, we do. 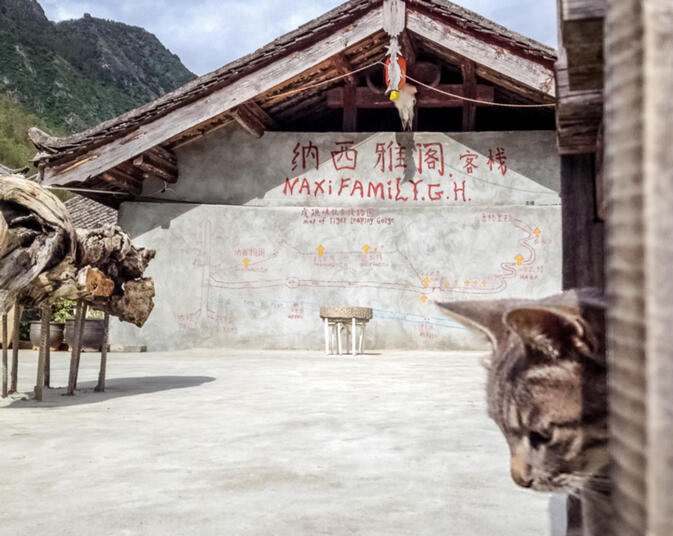 When we get there, we're not exactly sure how the Naxi Family will react to the thought of harboring two fugitives from the law. Having just eaten at Sean's, we're not even the least bit hungry. We just stare at the menu, flipping back and forth until finally we admit that we're not here to eat, we're really just looking for a place to rest. Grandpa Naxi pours us each a hot cup of tea, puts a sprig of fresh mint in each, and tells us not to worry.

"Relax," he says. "Make yourselves at home." Delighted, we do.

We take our tea and go up to the rooftop, get a table in the sun, snooze for a bit, play around with the cat and pass an hour or two. A bit hungry at this point, we order some food and a bowl of yak butter tea. Slowly the place begins to fill with the rustle of other travelers. We hardly notice it's already half past seven, and, safe to slip out, we do.

As we load up Lil' Red, Grandpa and Grandma Naxi come to see us off. "Come back soon," they say, waving as we make our way back to the main road.

The sun is going down now as we coast towards the exit. The fading light glazes the clouds with a translucent glow. A warm wind hits our faces and we can hear the river roaring as the sky melds into a million hues of blue, violet and gold.

When we get to the entrance, there are no guards in sight, and we make it to the petrol station with a bit of gas in the tank to spare. 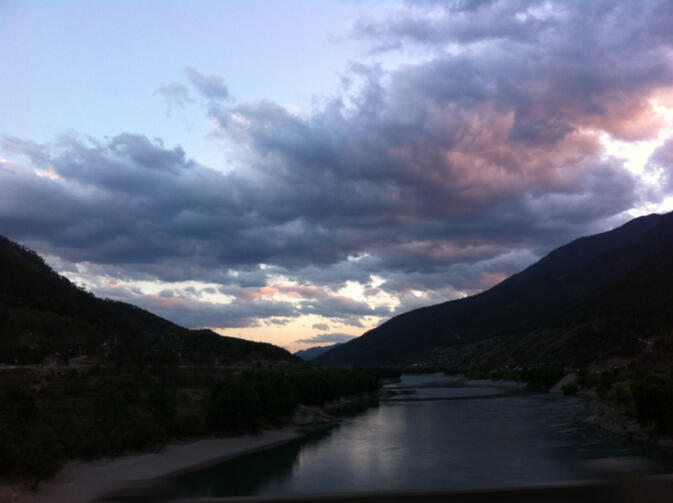 "Yunnan Drifter: An Alternate Guide to Traveling in Yunnan" is a book for people who want to experience a different side of Yunnan, beyond the tourist traps and main drags, to a place where secrets and adventures unfold.

Author Lisa Liang was born and raised in Los Angeles, California. She came to China eight years ago and was living and working in Beijing before deciding in 2009 to escape the sprawl of the metropolis for the countryside. She has lived in Yunnan ever since. When not traveling, writing and taking photographs, Lisa is based in Kunming, where she runs an all-natural, organic foods company, Yunnan Naturals.

Translator Lua Zhou is a Chongqing native who lives and works in Beijing.

you're right. No-one should be charged just to use a road if there's no other way around.

Good first chapter, but I hope it's not all going to be simply about how tolls & tickets were not paid.

I stayed in Sean's Guesthouse 30+ years ago. Sean's wife is a New Zealander, is she still there?

awesome... looking forward to the rest

They are really nice at the Naxi Family Guesthouse! Where can one buy the book?

Indeed, an interesting and captivating article. But just to mention, for those of us who have known Xia Shanquan (Sean) for many years, we know him to be one of the most intelligent and right on activists we've ever met in China. Having been married twice, his second to an Australian named Margo (RIP), and regardless of his physical handicap, he continues to stand up for his native TLG's people and environment. His current girlfriend is also not his wife. Facts are better than rumors.

Good job, Lisa...You pulled me right in and now I'm going to follow your chapters and be ready to buy your book. Again, nice writing and this is going to be really interesting — I can tell!
Nevada