Over the mountain: From the Salween to the Mekong 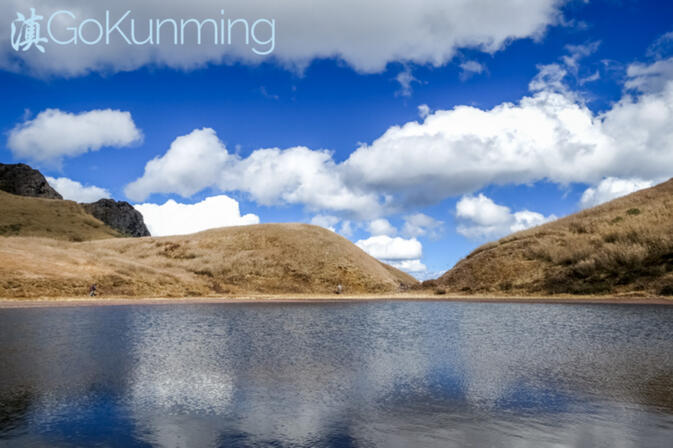 Historically, culturally and geographically, northwest Yunnan is one of the most diverse and alluring destinations in China. Our purpose for this adventure was to explore a short trail leading up and over Biluo Snow Mountain (碧罗雪山) in Fugong County (福贡县) with trekking guide and friend Hongxing — a Tibetan Catholic from Cizhong Village (茨中村). 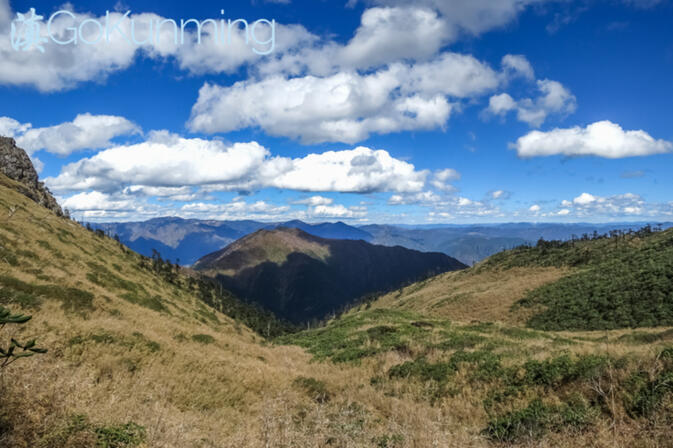 Hongxing frequently takes travelers from Cizhong to Dimaluo (迪麻洛), but we are in search of a fantastic off-the-beaten trail that crosses the mountain ridge separating the Nu River (怒江) in the west from the Lancang (澜沧江) further east. We meet up in Bingzhongluo (丙中洛) near the Nu River and then journey downstream before starting our trek over the pass. 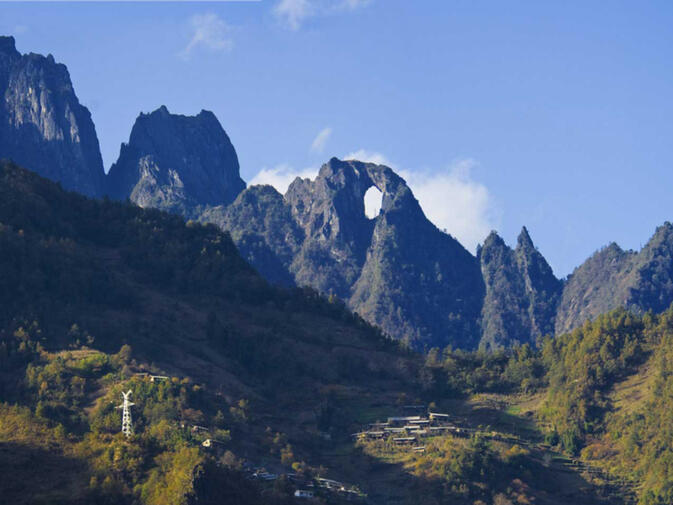 We set out from Shiyueliang (石月亮) — or Stone Moon — a remarkable hole in a mountain through which you can see the sky winking back from the other side. Hitching a ride on a three-wheeled motorbike with two Lisu kids, our destination is Shimendeng (石门登), a tiny village set against the stunning backdrops of Biluo Snow Mountain. 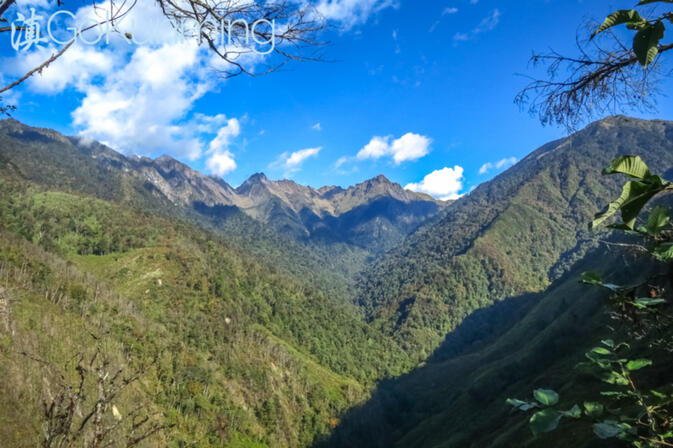 From the Stone Moon, the motorbike travels 40 minutes up the winding dirt road and we pull into Shimendeng at sunset. We stay with Lisu families and they tell us the story of how Christianity came to this area of Yunnan generations ago. 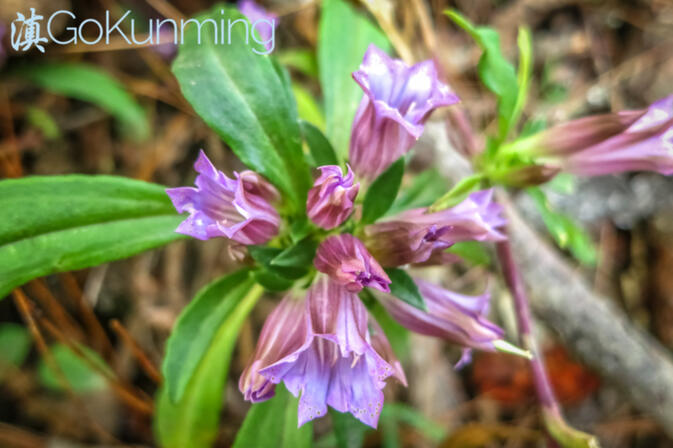 They also tell of how many of the young people are leaving to find work in the cities of China's east coast and how farming in the area is changing. People used to grow corn and white kidney beans, but recently they have introduced caoguo (草果), a cash crop used in Traditional Chinese Medicine. 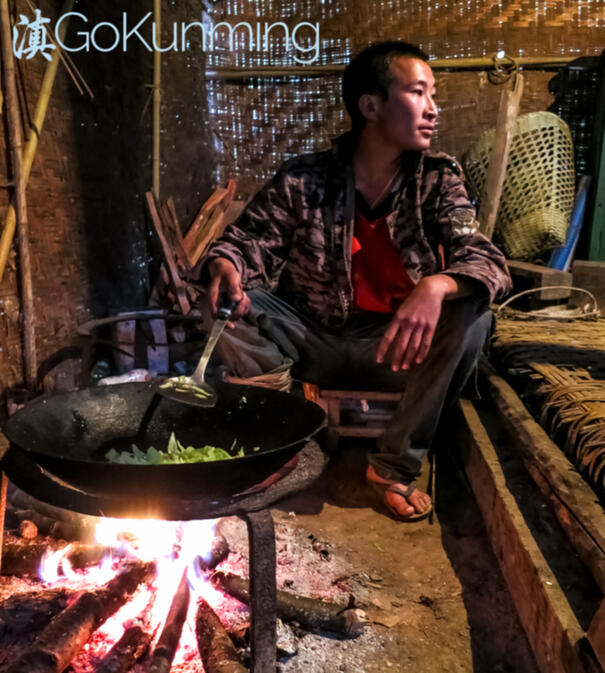 One of our hosts is named Akei. Unlike his fellow villager youngsters, he chose to stay at home with his widowed father to do farm work — his first bother died at birth, and his second brother serves in the army in Guizhou province. Akei proudly shows off the new cell phone his brother just sent him from Guizhou. 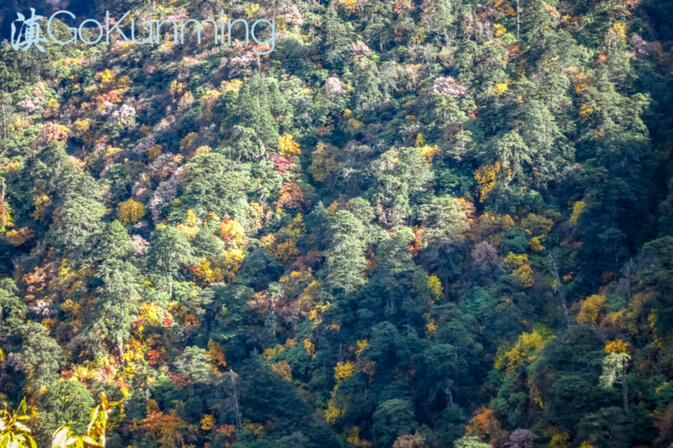 After a vegetarian dinner washed down with some beer by the fireplace, we go to bed. Unfortunately, insomnia lasts the whole night because of several minor earthquakes. It felt like the whole house was trembling, but Hongxing and the host family sleep tight as if nothing was happening. We get up at 6:30 in the morning — 30 minutes before dawn — and collapse back into bed for a half-hour nap. After a quick breakfast, we set out, first passing Kualadu Waterfall (夸拉杜瀑布). We fill our water bottles as our guide Akei says there are few springs until after the pass. 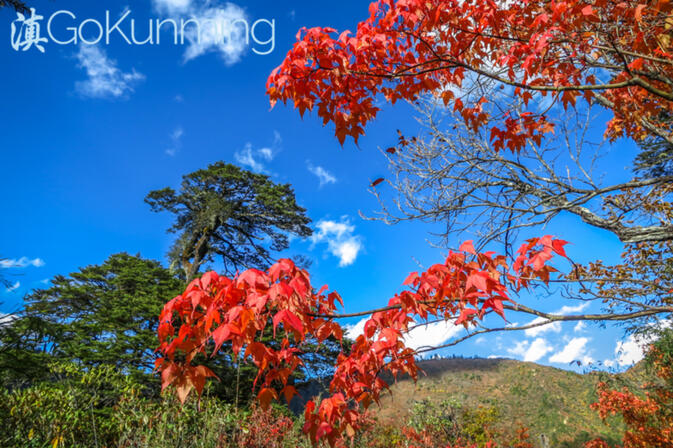 Akei pushes for speed, grumbling about a group of lazy tourists he guided in June. We start to crawl up the zigzagging trail to the pass. The elevation of this trail is not particularly high and passes mixed broad-leaf and conifer forests until we reach a bamboo grove rustling in the wind. Different hikes on Biluo Mountain reveal different scenery. On this one, we pass through both rhododendron groves and high-alpine meadows. Views of scree fields in the far distance are never out of sight for long. The trail is a relatively short vertical distance to the pass at the top of Biluo Mountain. But it is a strenuous hike with tons of elevation gain as the path leads up and down. Near the pass, we come across a large expanse of scrub grass that goes on and on. The brown of the turf contrasts mightily with the blue sky above. Adding more blue to the scene is Oulübi Lake ( 欧吕比), a lovely little body of water that reflects the sky perfectly. We also catch a last glimpse of the snow-capped Gaoligong Mountains on the far side of Nu River. This spot marks the pass and Akei leaves us, heading back down to Shimendeng on his own. Where the trail begins to descend there is large a stack of hiking sticks, traditionally abandoned when trekkers begin to go down into the Lancang River valley. After three hours of continuous and steep downhill hiking through a forest colored by yellow and crimson, we get to an area farmed by a residents of a nearby Lisu village — perhaps the highest cultivated area in the valley. We cross a roaring brook swelled by snowmelt after a recent storm and Hongxing picks up a long and thick chunk of fallen bamboo to take back to Cizhong Village. Once back, he'll trade with a relative of his and it will be used to knock walnuts out of trees. Another hour of comfortable walking and we get to Lidi Village (里底村). The small town is home to 200 households, only two of which are not Christian. We ask two villagers to drive us on their motorbikes to Baijixun (白济汛) on the banks of the Lancang River. The drive takes an hour and the entire time we marvel at how Hongxing maneuvers his three-meter bamboo pole without falling off while riding on the back of the motorcycle. It's totally dark at 7:30pm when we get to Baijixun and the two villagers, who have worked the whole day picking white kidney beans, decline our offer for dinner and home-made whiskey, citing their religious beliefs. Editor's note: This article and its accompanying photos were submitted to GoKunming by anthropologist and translator Sun Fei (孙飞). If you have a story idea, feel free to get in touch with us via the GoKunming contact form.

Beautiful photos! Must have been a wonderful trip.

Great photos and so much fun and descriptive detail in the article. Thanks for publishing this!