On APEC sidelines, China and India try to make nice 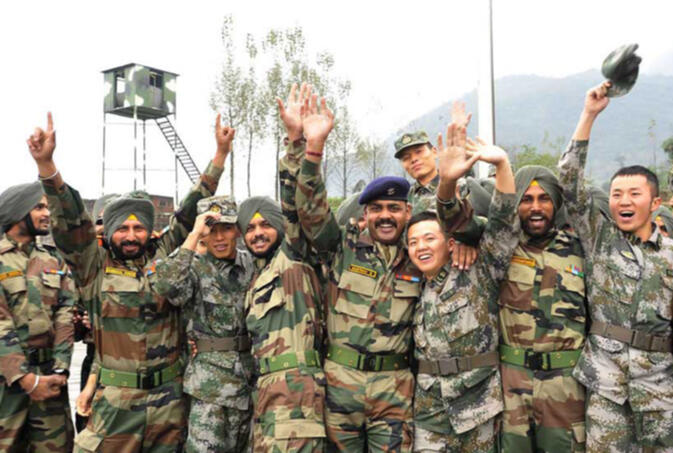 China's ongoing attempts to reconcile with regional rival India continued in a small way this week while dignitaries from Pacific Rim countries met in Beijing. Noticeably absent from all of the goings-on at the Asia-Pacific Economic Cooperation (APEC) conference was any high-ranking official from New Delhi. Nonetheless, the two most populous countries on earth did manage to forge one accord, agreeing to hold joint military exercises later this year.

As president Xi Jinping hosted representatives from 20 APEC nations, officials from both India and China worked behind the scenes in an attempt to once again shore up faltering relations, albeit in a rather modest way. Although specific dates have yet to be finalized, the two countries have scheduled joint military and counter-terrorism drills for "the near future".

Past cooperative exercises between the Chinese and Indian militaries have focused on mountain warfare. The newly announced drills will reportedly make urban combat strategies a priority. A detachment of 139 soldiers from the Chengdu Military Command will travel to India's seventh largest city, Pune, for training.

Shared military exchanges have frequently been used in the past when China and India feel the need to repair stressed political relations. The tension this time around stems from the recently concluded economic summit itself. In a July meeting in Brazil, Xi invited Narendra Modi to attend the November APEC meetings — a step seen by many as remarkable given India is not an official APEC partner. Similar offers were also extended to the leaders of non-member countries Pakistan and Mongolia. The latter two nations accepted, while India's Modi declined.

The prime minister's spurning of the APEC invitation has been attributed to concerns over his county and China's longstanding border dispute in the Himalayas. Also at issue is a complicated World Trade Organization dispute involving the subcontinent that erupted earlier this summer.

Much is at stake for both nations amidst this most recent discord. India is seeking further integration into the world economy while China continues to pursue the Bangladesh-China-India-Myanmar (BCIM) economic corridor — a proposed overland trade route connecting Kunming to Kolkata. Beijing sees BCIM as vital to its future trade interests and a key cog in the development of Southwest China.

Military "hand in hand" cooperation has been used on several occasions over the past decade when the Asian giants have experienced political friction — often to much media fanfare but little effect. Instead, Beijing and New Delhi appear to use these limited military collaborations to reassure one another that the lines of communication remain open regardless of the difficulties.

Fighting over borders set by a European imperialist power, in their own interest, shows you something about the nature of modern nationalism.