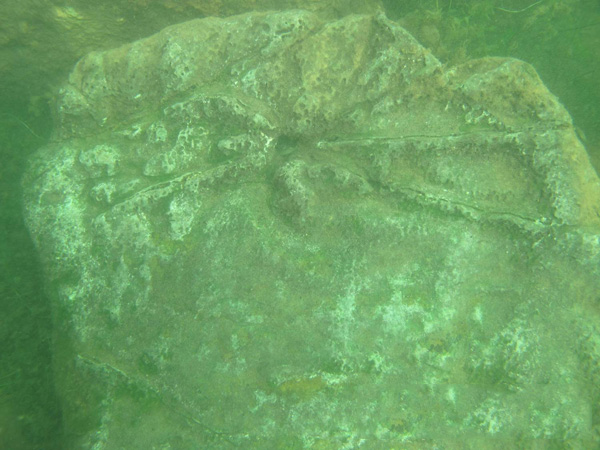 A research team diving in the waters of Fuxian Lake (抚仙湖) has uncovered more archeological evidence of a long-rumored, submerged ancient city. The 20-day investigation off the eastern shore of the lake allowed researchers to map portions of the site, take photos and, perhaps most importantly, recover dozens of long-forgotten relics.

Scientists from the Association of Chinese Cultural Studies (ACCS) and Yunnan University conducted their fieldwork from September 26 until October 15, recovering 42 handmade stone artifacts in the process. The interdisciplinary group, working roughly 60 kilometers southeast of Kunming, included historians, archeologists and experts on the ancient cultures of Yunnan. 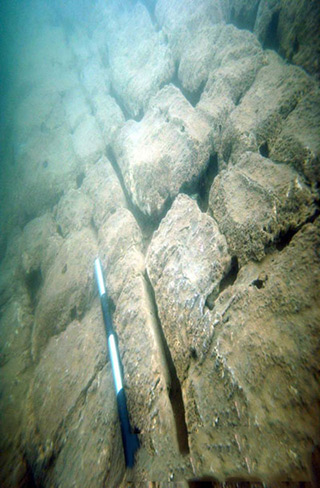 The objects retrieved during the dives were catalogued and tagged with individual global positioning coordinates and will now be further analyzed in labs. In addition to the relics, several carved stones were photographed and otherwise documented. These include marks the scientific team says resemble Yijing (易经) divination trigrams, as well as representations of male and female genitalia and depictions of the sun and moon.

The underwater area in question stretches over 2.5 square kilometers and the research carried out recently focused on a relatively small portion of the site. Of the 30 buildings, walls and cobblestone roads thought to lie below the surface of Fuxian, only two were examined during the September and October dives.

Huang Yilu (黄懿陆), professor of archeology at Yunnan University, told reporters, "[Our] investigation and research is based on formal examinations organized by CCTV in 2001 and 2006." Those two expeditions, which used submersible vehicles, actually created far more rumor and innuendo than they did provide scientific certainty. Eight years ago when China Central Television was once again covering the story, the national press routinely referred to the ruins of Fuxian as either "China's Pompeii" or "China's Atlantis".

Speculation ran rampant that the ruins were part of an extensive city, complete with an Egyptian-style pyramid that perhaps dated back 4,800 years. Carbon dating conducted in 2007 calmed things a bit when some Fuxian relics were found to be roughly 1,750 years-old — meaning the buildings were constructed after the fall of Yunnan's Bronze Age Dian Kingdom.

Little to nothing is known about the city or the people who built it. According to Huang, there are no historical records in the Chinese canon of an advanced stone-building civilization that corresponds to the carbon dating data. Although Fuxian Lake is China's second deepest, the recent dives were conducted at an easy-to-reach depth of seven meters, hopefully indicating additional research will not be another eight years in coming.

Yunnan's history, and that of many parts of China, should be seen for what it is and better understood. Tracing everything back to the Jade Emperor is a mistake and doesn't begin to present the complexity.

Agree. Because that would imply that China has always been a Han dominated homogeneous culture. However, it wasn't always so.

Agreed. Brings up the question of when/what/where is/was 'China'. Or, for that matter, Paraguay, France, or the USA.

There's a diving shop in Lichangcun, about 3km south of Luchong on the western side of Fuxian Lake. Gear can be hired there.