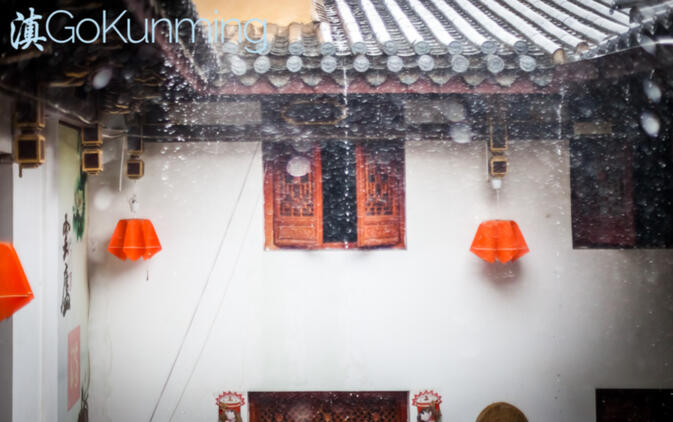 If it seemed this year's rainy season was soggier than the past few, that's because it was. Meteorological data released this week by the Kunming Weather Bureau shows rainfall levels so far this year in Kunming have been significantly higher than at any point during the preceding five years.

In total, major reporting stations around the Spring City have registered an average of 719 millimeters of rain this year. While picturing this number may be a bit esoteric, it represents a return to, and exceeding of, historical averages following half a decade of recurrent drought conditions. Crop loss and emergency measures enacted by provincial leaders had, in the past, become the norm and the drought was labeled the worst to hit Yunnan in a century.

The beginning of September is often considered the end of Yunnan's rainy season, which typically runs from late May until August. For the past five years at this time, water authorities have issued a variety of announcements concerning the state of Kunming's water supply, ranging from overly optimistic to downright gloomy. This year, however, news reports have largely maintained a sense of equanimity, perhaps signaling the situation is actually under control for the time being.

Of particular interest to Kunming residents are statistics regarding the city's main water sources — Yunlong (云龙水库), Qingshuihai (清水海) and Songhuaba (松化坝) reservoirs. Combined, they now hold 226 million cubic meters of usable water. This is reportedly a 23 percent increase over totals from the same time last year, when water authorities were cautiously optimistic supplies would sustain Kunming through the winter — which they did, barely.

Increased rainfall in 2014 has meant the recurrence of news stories cataloguing agricultural and economic losses has been relatively low. Also limited have been once-common government publicity campaigns on television, in schools and on buses urging people to use less water and donate money to particularly hard hit regions of the province.

Over the course of Yunnan's five year drought, environmental groups and government officials have considered a series of radical initiatives aimed at limiting the severity of future water crises. These have included the discussion of massive reforestation projects, an 800-kilometer river diversion scheme and the current construction of thousands of small, village-level cisterns. It appears, for 2014 at least, mother nature may have supplied the best solution.

Water collection and conservation projects should continue - one wet season does not solve a prolonged drought issue. Additionally, Kunming continues to grow, along with its water usage and waste water processing requirements.

Village level cisterns are critical, as are water pollution reduction programs. Cities should also continue with processing and use of waste water for irrigation (although, please make the processed waste water less stinky!).

"water pollution reduction programs"
I agree, but I'd really like to see the word water removed from that program.

Waiting 10 minutes or more for hot water in the shower is a huge waste of water. Water conservation could be increased by a simple pipe insulation in the concrete.

Even better would be a circulation system...
Even better still would be proper building codes..

@Mike: You've got a good point, but increasing the insulation of pipes would mean really a lot of work and money to take care of the many buildings in Kunming that don't have sufficient insulation at present. Fine idea for new buildings, but then I think we've got more than enough new buildings going up, and construction uses a hell of a lot of water.

So the rainy season comes to a close when, exactly?

Good question - it started in May rather than late May or early June this year, dumped more water than usual all summer, and now we're in late September - a lot more rain in September than usual.