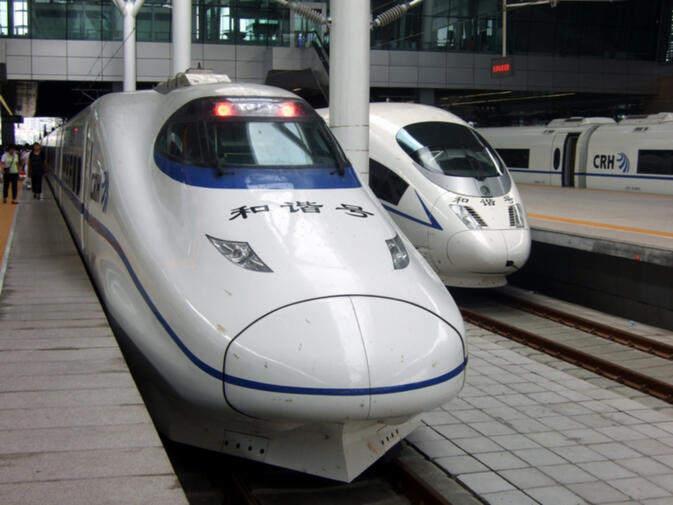 Trains, such as these in Tianjin, will eventually ply railways connecting Kunming to Singapore

For years, China has been attempting to strengthen Yunnan's economy through upgraded trade with Southeast Asia. This has been facilitated by new highways, a sprawling airport and a theoretical network of high-speed railway lines. Several of the rail lines are inching toward completion inside the province, but until recently seemed doomed to dead end at international borders due to slow progress or cancellation by neighboring countries.

Hope in a Kunming to Singapore rail system has been revived once again as one country integral to the plan, Thailand, recently announced it was moving ahead with construction. A spokesman for the country's ruling military faction, The National Council for Peace and Order (NCPO), has said work on railways connecting the Lao capital of Vientiane to Bangkok, will begin in 2015 and is expected to be completed sometime in 2022. 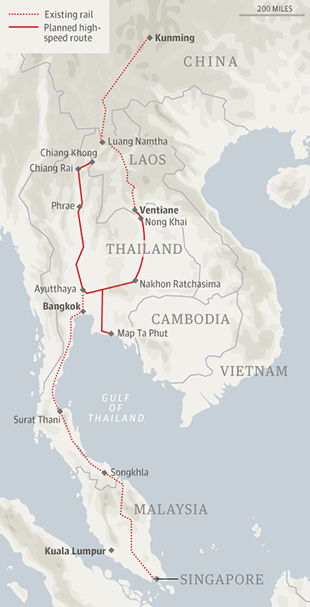 The NCPO has earmarked US$23 billion for the project, which will travel south from Vientiane to the Thai city of Nakhon Ratchasima before continuing on to Thailand's capital. The price tag also includes additional trunk lines which will stretch north and connect Bangkok to Chiang Rai. All told, the Thai network will span 1,400 kilometers.

An existing railway linking Bangkok to Singapore must also be upgraded to handle trains traveling at 160 kilometers per hour. Chinese planners once envisioned the railway would achieve cruising speeds of 200 kilometers per hour or more. Those aspirations may have been slightly lofty as reducing top speeds also significantly diminish the price of construction, which the NCPO has chosen to do.

Beijing has been aggressively touting China's growing proficiency in designing and building high-speed railways in other countries for several years. China is currently assisting Turkey in building a rail connection between Ankara and Istanbul and plans for a Southeast Asian rail network have been seen as a way to further integrate China's economy with that of Association of Southeast Asian Nations countries.

Besides economic planners in Beijing, foreign policy wonks have noted the 3,000-kilometer Kunming-Singapore Railway could vastly expand Chinese influence in the region and further push Kunming toward becoming a trade hub. Geoff Wade, a strategist at the College of Asia and the Pacific at the Australian National University, was recently quoted in The Guardian as writing:

When the people of the mainland countries soon find, through the convenience of [high-speed railways], that Kunming is their 'closest neighbor' but a few hours away, the Yunnan capital will gradually emerge as the hub of the Greater Mekong Region and will eventually become, in effect, the capital of mainland Southeast Asia.

While this is perhaps exactly what China's government would like, it will take years to see any concrete results in the Spring City. Not only will the Thai portion of the railway take an estimated eight years to complete, the Laos sections are nowhere near completion. Bogged down for years by funding issues, scandal and logistical setbacks, construction on railroads through Laos linking southern Yunnan to Thailand currently have zero funding.