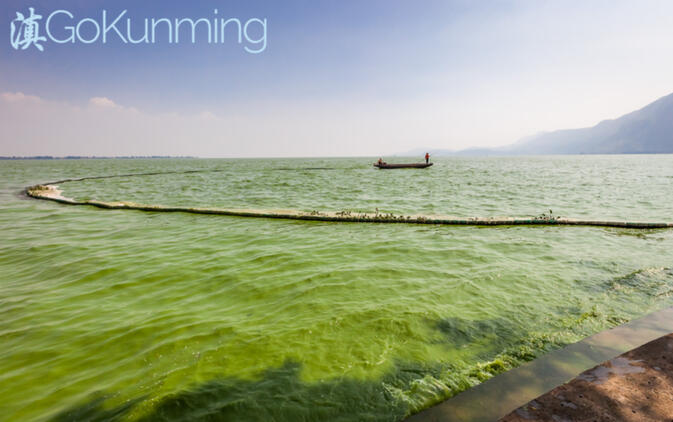 It may appear an obvious decision to some, but each year officials in charge of overseeing Dianchi Lake must determine whether or not to allow people to fish in the province's greenest body of water. In an announcement made July 24, the Dianchi Lake Management Bureau banned fishing on the lake through 2015, except in the case of freshwater shrimp and whitebait.

Most fish stocks in the lake have been on the decline for years as Dianchi suffers from a seemingly permanent case of severe eutrophication originally brought on by pollution and agricultural run-off. One of many ongoing efforts to raise oxygen levels in China's eighth-largest freshwater body had been to introduce hundreds of tons of live carp.

Officials hope to protect carp populations by instituting the fishing ban. The animals are omnivorous and feed nearly non-stop throughout the day. One of their primary sources of food is algae, of which Dianchi has more than its fair share.

This year alone, 1,400 tons of silver and bighead carp have been dumped into the lake. Officials say the the ban on commercial fishing will give the newly introduced carp time to grow, spawn and hopefully help rid the lake of some of the algae that has made Dianchi's waters a soupy, viscous green for years on end. Individuals or companies found to be illegally fishing face fines of up to 3,000 yuan.

Surveys conducted over the past year indicate whitebait and shrimp populations in the lake have steadily increased, two- and fourfold respectively. The two species were left out of the ban for this reason, but people will only be allowed to catch them for one month beginning October 9.

Concerns regarding overfishing are not without precedent. A similar 2012 prohibition was lifted for 16 days while the country celebrated National Day. In that time, 4,000 fisherman pulled an estimated 5,000 to 10,000 tons of fish from the lake. As GoKunming users have been quick to point out regarding similar stories, it is questionable why anyone is allowed or would want to eat fish from Dianchi. In the past, the water has been deemed too polluted even for industrial use.

Billions of yuan have been spent on lake rehabilitation efforts that have ranged from closing nearby factories, creating surrounding wetlands and pumping the water full of ozone. Provincial leaders have most recently considered diverting water from multiple rivers — some of them hundreds of kilometers from Kunming — in efforts to "flush" algae out of the lake.

Either a major achievement or govt statistics.

If it's banned for industrial use doesn't that mean there are some pretty nasty heavy metals in the water? Why would they allow shrimp to be fished in the past? Do they want people to get cancer or something?

93% of statistics in China are made up on the spot.

The green in that pic doesn't look like it was made from algae.

I think it's going to take a long time to get us past this manmade disaster.