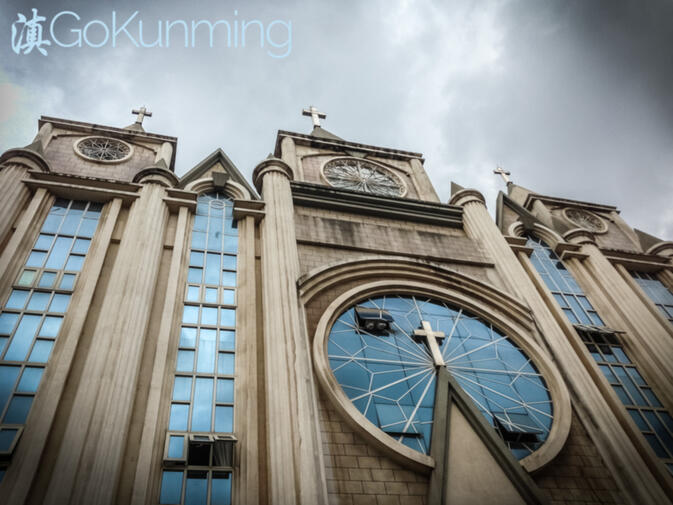 Across the road from Starbucks Coffee, behind the bus stop at Nanping Square, along a street called 'Auspicious Alley' (吉祥巷), where shops sell jade, jewelry and anime, there is a white stone Anglican cathedral. Known as the Saint John Gospel Church (圣约翰教堂), this building stands hidden from shoppers, vendors, and moviegoers in a spot it has occupied for nearly one hundred years.

The St John Church holds four services a week, on Saturdays and Sundays, and its pews can seat 1,400 people. Today, it is officially a Protestant church, although the building's history has deep ties to the Church of England.

In 1913, an Englishman named Dr Gordon Thompson arrived in Kunming with a small group of Anglican missionaries, aiming to set up a small hospital. The group took up residence in a courtyard at 96 Dongfeng Xi Lu. Two years later, the courtyard was torn down to construct a one-room church, seating 100 people, that Dr Thompson christened 'St John's'.

So reads the bronze placard entitled "Saint John Gospel Church", which summarizes the church's past for all passersby — that is, those who can read to the bottom, where the words are blocked by a large potted plant.

The placard continues: "In 1948, the mud and wood structure was replaced by a larger brick structure." In fact, according to the book Anglicans in China, St John's was destroyed in World War II and rebuilt to commemorate Allied soldiers who died in the war. An online source claims that the ashes of seventeen Flying Tigers pilots — two Britons, one Swede, and 14 Americans — once hung in packets on the walls of the church as a monument.

The ashes are long gone, but another bronze placard notes in Chinese and English, "For the Worship of God. In Memory of Allied Soldiers who Died in China. 1939-1945." This placard might be easily missed, since it is also blocked by a potted plant. 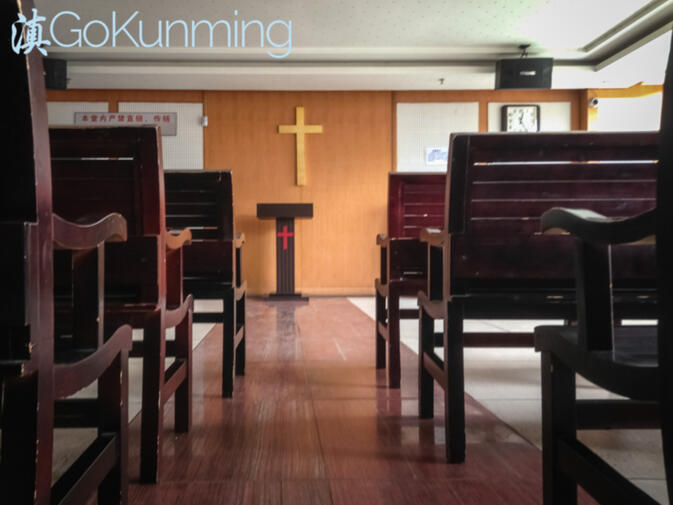 Next to these two placards, two polished white signs flank the front doors, announcing 'Kunming City Christian Association' and 'National Committee of Three-Self Patriotic Movement of the Protestant Churches in China' (三自爱国运动委员会). The latter is one of only two state-sanctioned Protestant churches in China, approved by the government in 1979. The Three-Self Movement arose in the 1950s as mainland Christian leaders attempted to remove foreign influence from Chinese churches; the 'Three-Self' refers to self-governance, self-support — financial independence from foreigners — and self-propagation, or indigenous missionary work.

St John's began operating under state sanction in 1986, after a twenty-four year period of inactivity due to "historical reasons". During this hiatus, the building was managed by the Municipal Vehicle Industrial Corporation.

Government sponsorship eventually made way for the "Joint Reconstruction of St John's Church", a resolution passed in 2003 by the Three-Self National Committee to massively renovate the building. In 2006, the new St John's opened its doors, along with the Shijie Jingxin Jewel City, a community of jewelry vendors who shared the building with the church and sold jade from its first and second floors. One jade vendor explains:

This land has always belonged to the church. But it's right in the center of the city. So when the city started to develop this part of town, the church didn't have the money to keep this land, so they made a deal with the real estate businessmen — they get to use the front of the building as a church, but the rest of the building goes to the vendors, and we pay rent to the church.

The jade dealers aren't the only ones capitalizing on St John's prime location. An apartment complex thrives on the north side of the building — a 2-bedroom flat on the fourth floor is going for 2,300 yuan a month. Meanwhile, several police officers man a small station built into the left side of St John's entrance hall. They park on the front steps Monday to Friday, sucking slow tobacco out of water pipes. 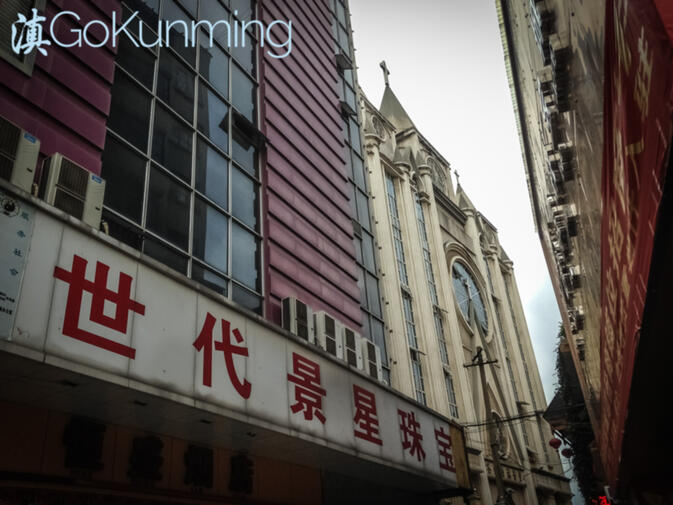 For much of its century-long past, St John's served as an outpost of the Hong Kong diocese of the Anglican Church. On October 28, 1944, the Bishop of Hong Kong, Ronald Hall, visited St John's to ordain the church's new pastor. Here, an excerpt from his accounts:

I was told when I arrived that someone had given a new cross, which we badly needed, for St John's Church, and a curtain to hang at the back of the altar. Martin and his wife had chosen some deep plum-coloured silk, and the cross he had made himself in his factory. The combination of the love behind them and their simple beauty gave a new centre to our worship on the Saturday night. It was a lovely service, reverent, and the church pretty well filled, with much the larger proportion (well over three-quarters of the congregation) young men.

Not surprisingly, the size and make-up of St John's congregation have changed since Hall's visit. On a recent Sunday, when we attended St John's morning service, the majority of churchgoers were women, and the elderly slightly outnumbered the young. A choir sang hymns as latecomers climbed up the stairs, past the bulletin "What is Communion?", and took their seats in shallow-backed pews.

Pastor Chou, dressed in a priest's black shirt with a clerical collar, delivers the sermon from one pulpit as three screens project rolling scripture to the audience. Although the speaker is a woman, we are told that female priests are not uncommon here; indeed, there are more women than men in the clergy.

Among other things, the sermon urges faithfulness, decries the teachings of false sects and wayward underground Christians, and warns against temptation. "Brothers and Sisters," Chou says. "Every time I see a nonbeliever laugh at us, or mock us, or insult our faith to my face, I want to pray — Heavenly Father, do something! Smite them where they stand, prove to them your power!"

"But I stop. Because what does the Lord want?" she asks.

Murmurs, shuffles, a silence from the crowd.

"That all his children should be saved, that not a single one is left behind. Amen?"

"Amen!" This time, the response is resounding. 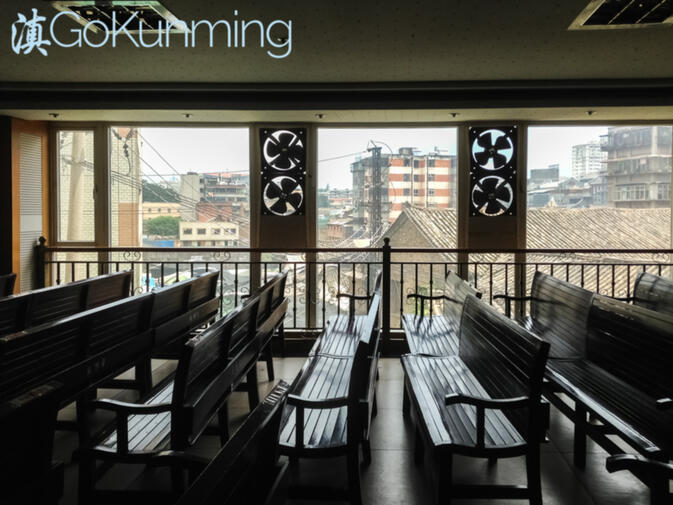 The congregation unites to recite the Lord's Prayer, signaling the end of the service. "I've been coming to this church for five years." says Tang, a lifelong Christian in his seventies, "I like it because it's less crowded than Sanyi."

Tang refers to Sanyi Church, or the Kunming Holy Trinity International Church, a pastel building on Renmin Zhong Lu and currently the largest church in Kunming. A member of the same branch of the "Three-Self" movement, the Trinity Church was built in 1903 and can seat 2,000 people.

Altogether, St John's has 2,000 members. "Four thousand at Christmas," a deacon adds. According to the church's pastor, the Protestant community in Kunming has been growing rapidly while the numbers of Catholics are holding steady or declining slightly. "The Catholics are more conservative," the pastor says. He mentions several friends who have left the priesthood in recent years to get married. 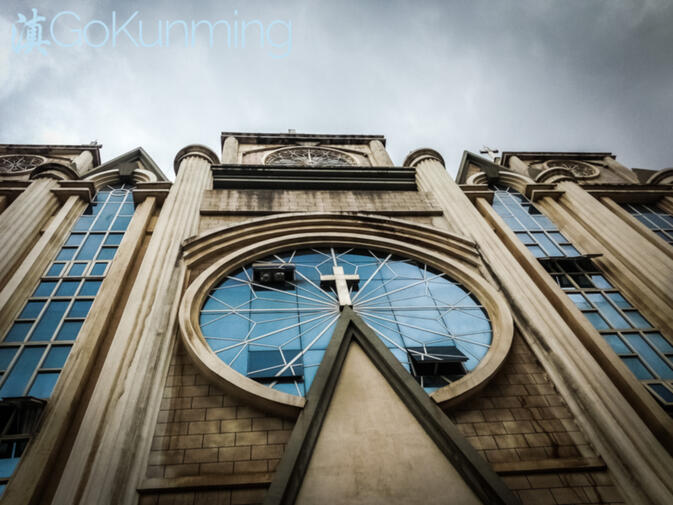 There are more than a million Protestants in Yunnan, according to Three-Self reports, though the church's members have historically been minorities living in rural areas. In some minority villages in Yunnan, virtually all of the population has been Protestant for generations. St John's and the Trinity represent a recent shift in the church's focus towards educated, urban, Han believers.

Unofficial house churches are flourishing in Kunming, despite a definitive ban by the government. Kunming Wuhua District Representative Yang Meirong, in a 2007 proposal called "On increasing the number of religious venus in the Wuhua District", urged the government to build more sanctioned churches:

In 1949, Kunming had 15-16 churches serving a little over 2,000 Chinese Protestants. Now, a conservative estimate gives us 30-40,000 Christians in the urban districts of Kunming City. We have only two medium-sized churches, and a third in disrepair with no firm plans for renovation.

Yang points to the northern district of Kunming, where there is no church but thousands of Protestants. She warns that "home gathering places" where Christians meet and worship are susceptible to "nefarious" outside missionaries, an appeal likely made to convince local Party leadership.

As an officially sanctioned gathering place, St John's is free to provide spiritual services to believers. During the week, a women's prayer group meets on Tuesdays, and a "Special Topics Lecture" is held every Friday night. On Thursdays, the church choir rehearses in the sanctuary; their voices — tenors, altos, sopranos — can be heard in the alley, from the quiet of the jewelry stalls: "Be not afraid...I go before you always...Come follow me, Be not afraid."

smite them where they stand... ha ha ha!

Really enjoyed this article. Very interesting to read about the history of this place, always wondered every time I walk past...