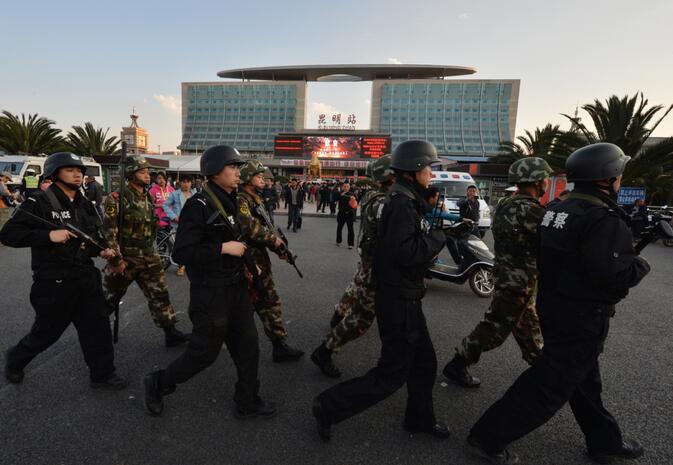 In March of this year, a group of men and women armed with knives descended on the crowded Kunming Railway Station. Their ensuing rampage left 29 civilians dead and 143 injured in what is one of the most violent coordinated attacks to occur in China in recent memory. Four people accused of perpetrating the violence have been formally charged and will soon stand trial, Xinhua is reporting.

Official accounts of the attack state that six men and two women participated in the train station assault. Of those, four were shot and killed at the scene by police. One woman was subdued and arrested at the station, while three other suspects remained at large for 36 hours before being captured. No details of the manhunt or exactly how, where and when the fugitives were caught have ever been made public.

The four defendants stand accused of multiple crimes and will presumably face the death penalty if convicted. They have each been charged by the Kunming People's Procuratorate, the city's highest court, with participating in a terrorist organization, carrying out violent terrorist activities and premeditated homicide. No date has been publicly announced for a trial.

The outcome of the case is likely a foregone conclusion. Defendants tried by the government, especially in high-profile proceedings such as this, are generally found guilty following extremely short, closed-door judicial proceedings. A short, terse statement by prosecutors trying the four defendants appears to confirm this. It read, "The facts are clear and the evidence is ample. The four [suspects] should be investigated for criminal responsibility according to law and then prosecuted according to law."

The defendants are all ethnic Uighurs from China's Xinjiang Autonomous Region and prosecutors maintain the March 1 attack was religiously and politically motivated. In a statement made shortly after the suspects were apprehended, Yunnan Party Secretary, Qin Guangrong, characterized the captured men and woman as Muslim terrorists, adding one had confessed to the crime and admitted the group wanted "to join jihad".

China has significantly ramped up law enforcement and 'anti-terror' efforts following the bloodshed in Kunming. In many cities around the country, police officers are now permitted to carry sidearms for the first time in decades. Trials involving suspected militants have also increased, and 113 people were recently jailed for terrorism-related crimes by Xinjiang courts.

'the attack on a sleepy provincial station'
Not the best description of Kunming station!

Meant to say description by BBC

I was pretty sure at the time the terrorists probably attacked poor migrants as they are the majority of anyone/everyone I see in rail station ticketing areas. Now confirmed.

BBC article: trying to stop Muslims from fasting during Ramadan is unikely to please anybody. Capital punishment for those willing to die in suicide attacks is unlikely to discourage terrorists.

as basque and against terrorism, i agree alien. capital punishment justifies talionlaw

but west is maybe not good at that

The remainder finally got their comeuppance:
www.bbc.co.uk/news/world-asia-china-32029430