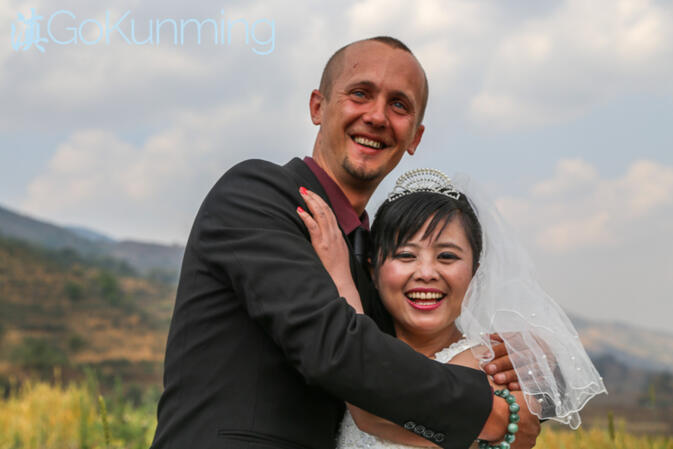 Editor's note: Special thanks to Mike, A Qin and both of their families for inviting us to take part in such a special occasion.

A bit wobbly, we tromped off the plane and down onto the tarmac of Lincang's not-quite-so-international airport. Takeoff and landing had both featured wind sheer — not enough to make anyone sick, but enough to quicken the pulse. Nevertheless, it was hard to complain about a forty-minute flight, and besides, the view that greeted us was gorgeous.

A whole horde of us had just flown from Kunming to attend the wedding of our good friends Mike Medcalf and A Qin (阿琴) in the bride's hometown. The plane ride turned out to be just one in a series of different journeys as we made our way to Wenwu Village (文物村). 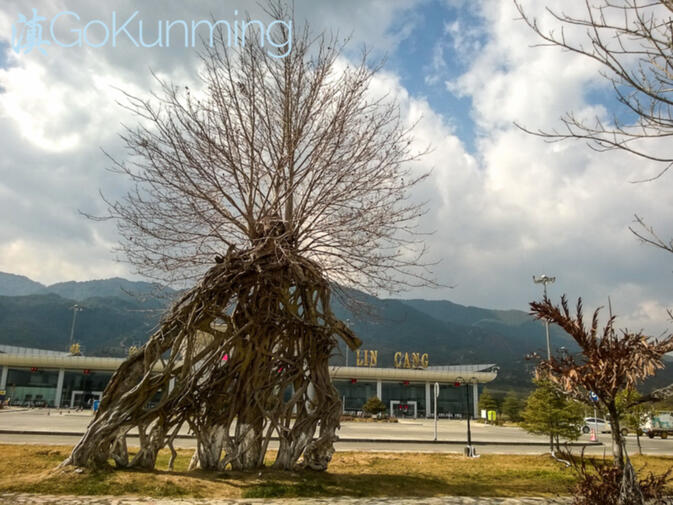 We waited about 25 minutes for our pink and orange bus, which eventually picked us up just a few meters away from one of the strangest ornamental trees we'd ever seen. Sporadic attempts at a capella singing were made during the trip into Lincang, usually fading out into confused mumbling as people stumbled on forgotten lyrics and then burst into slightly embarrassed laughter.

We rolled up outside of the Lincang version of Salvador's Coffee House without having made it completely through an entire song. Lunch was served and alcohol ordered. Then it was back on the bus. We commandeered the stereo and for the next four hours revived our attempts at singing, created an ever-growing pile of empty beer bottles and greatly annoyed our driver. 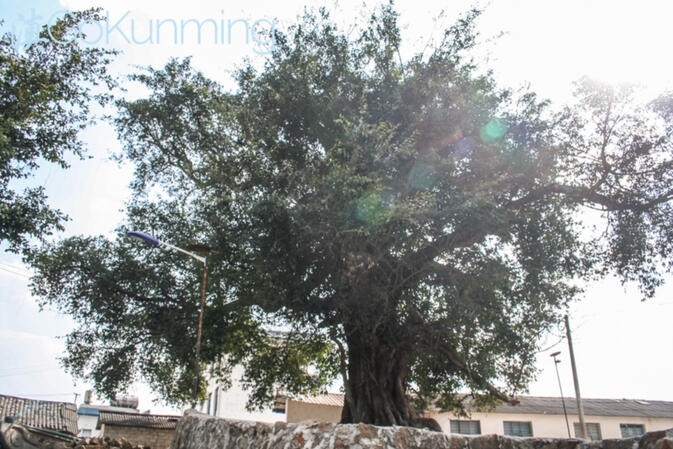 Just as the last light of day was fading into darkness we arrived at the village. Our flustered driver quickly unloaded all of the various bags, backpacks and suitcases and was off. The walk to A Qin's family home was about two hundred meters from the main road, past a tiny public square, adjoining school and under the branches of a massive 500 year-old tree.

Up until this point the trip had been entirely about us, the warbling motley crew from Kunming. That mindset changed — to a man and without any words — as soon as we arrived at A Qin's house. Everyone was properly introduced to her mother and father before being directed to relax at any of the low tables scattered around the family courtyard.

We had come too late for the dinner the family had shared with their friends and neighbors but were nonetheless treated to an excellent vegetarian meal prepared separately. Cigarettes were proffered from all angles and soon cases of beer began materializing from an upstairs storage room. 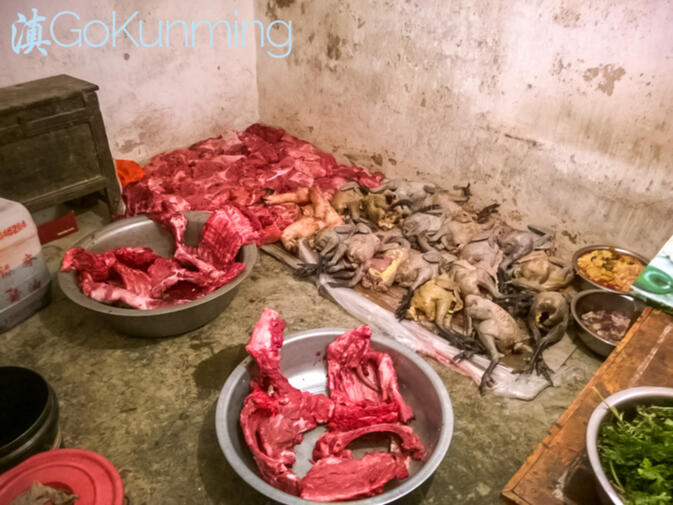 The courtyard was packed with people and for a time a group of children held sway, trying to teach some of the foreigners songs. Everyone mingled, some given a quick show of the house, including its two balconies — one on the second floor and a second comprising the roof of the house. These tours invariably ended at a room next to the kitchen, which contained the bodies of one freshly slaughtered hog and seventeen chickens. Apparently the next day's meals were going to be big.

The evening wore on and eventually men sett the courtyard tables into a long row. From seemingly nowhere, one of them began playing the lusheng (芦笙), a traditional Chinese woodwind instrument resembling a giant pan flute on steroids. A dance started to take shape around the tables and more and more people joined as time went on. 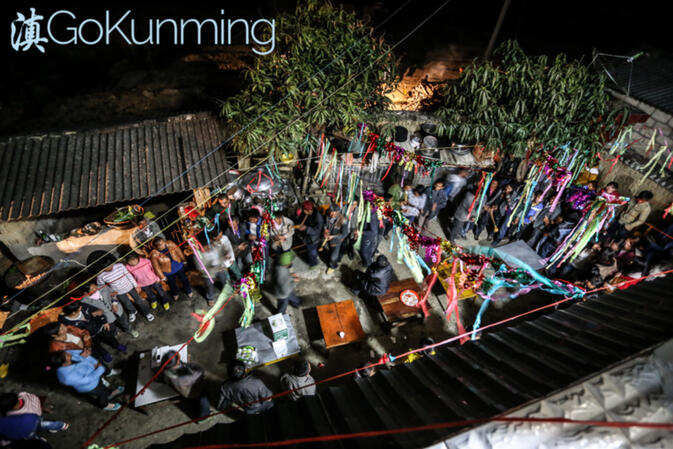 The dance, a local version called lushengwu (芦笙舞), appeared to be fairly simple at first glance. People held hands or draped their arms over each others' shoulders and shuffled in a circle around the cluster of tables. For the uninitiated it was a bit more complicated than that. Participants performed a series of steps and kicks in time to the music, punctuated by a coordinated lurch to the right.

More and more musicians joined the circle, somehow keeping the song going while taking part in the dance. Tables were added to expand the periphery and soon the entire courtyard was occupied by an oblong ring of people moving in time to the hypnotic and unchanging tune. 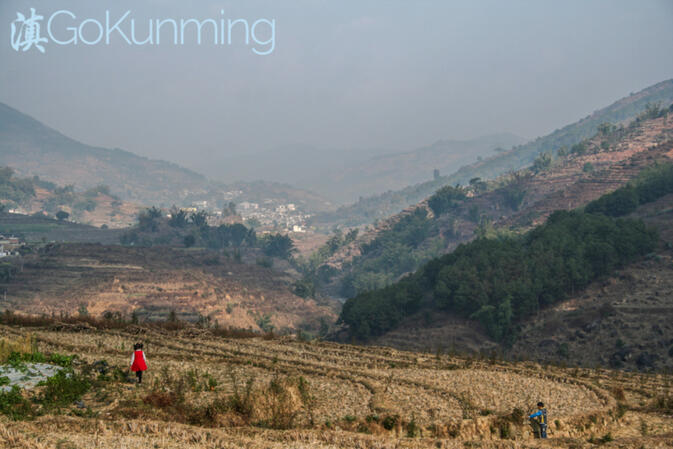 When asked about the significance of the dance, locals explained the lushengwu is traditionally undertaken to scare away ill-intentioned spirits. The longer the dance goes on, the more the bride and groom are guaranteed an auspicious wedding day. This, coupled with the first full moon of the lunar new year shining down upon the revelry, were seen as especially fortuitous for Mike and A Qin.

The Kunming contingent began to leave around midnight, heading to various guesthouses near the village. The dance continued late into the night. When we arrived back at the village the next day, we were told the lushengwu had gone on well past two in the morning, wrapping up after more than four hours. 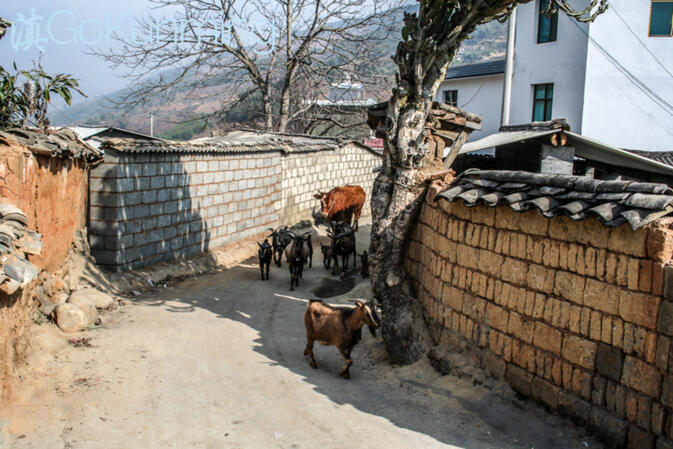 Our second day in Wenwu Village gave us a greater opportunity to explore the area. A Qin's family lives in a newly built concrete house roughly half a kilometer away from their ancestral home. That residence was destroyed in a landslide caused by torrential rains a few years ago. No one was hurt in the disaster, but the family did decide to move to safer ground.

Their home is now situated on the north end of Wenwu Village and commands a wonderful view of the terraced valley in which it sits. The village itself is a hodgepodge of different types of buildings. Many of the 64 households that make up the town are old mud-brick structures. Families like A Qin's are upgrading their dwellings and some are rebuilding entirely with cinderblocks and cement. 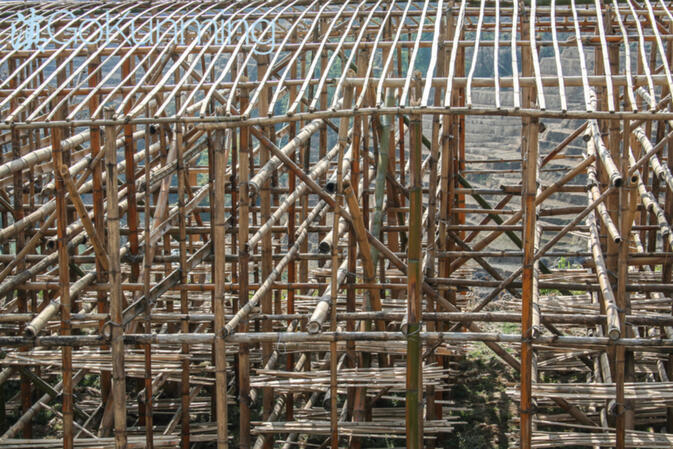 During a walk around the village a few of us discussed where we thought the money was coming from to erect the new houses. Our answer, or at least part of it, was not long in coming. All around town were multi-level buildings with no walls or roofs that resembled little more than bamboo scaffolding. Locals later informed us the structures were built specifically to grow songrongjun (松茸菌), or matsutake mushrooms.

This will be the second year residents of Wenwu Village will be growing the pricey mushrooms. By the shear number of matsutake-growing structures, it appears the fungus is fast becoming a valuable cash crop used to supplement incomes once based almost entirely on growing rice, wheat and canola. 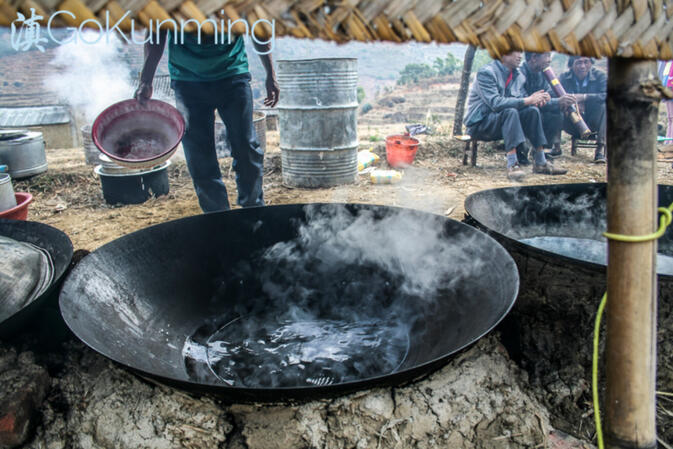 Back at the house the crowd was still getting bigger. Food was once again being prepared in giant woks set up outside the house under a tarpaulin. Eating would turn out to be an all-day affair. Tables were once again set up in the family courtyard and as soon as one person finished, another sat down to enjoy the dozen or so dishes filling the table.

Tea leaves and sunflower seed husks covered the ground, the children were out again in full force and everyone, save for the furiously working cooks, relaxed in the sunshine. A soccer ball appeared. For most of the next hour people alternated between eating, talking and watching would-be footballers try in vain to accurately kick the ball up and down the fallow rice terraces. Eventually Mike appeared, looking dapper in a black suit. Shortly after, A Qin emerged from the house dressed in a lovely Western-style wedding gown. The two posed for photos with their families and then assumed door duty. This tradition involves the bride and groom welcoming guests into the family home by giving away candy, sunflower seeds and cigarettes.

There was no formal marriage ceremony at A Qin's home. She and Mike had been officially hitched in Lincang a few days earlier and the multi-day party that followed was a time for people to informally get together and offer their congratulations. Afternoon bled into evening. A Qin changed into a more traditionally Chinese red wedding outfit while even more visitors came to pay their respects. By the time dinner had concluded the house was once again full to bursting with people. We sat chatting for a long time in large clumps of people — 40-50 on the balconies and dozens more down on the ground floor. This broke up when the majority of the men at the party congregated in the courtyard and got down to some serious drinking.

The Kunming group joined them for a while, long enough at least to realize we would never make our bus the next morning if we joined in drinking the homemade liquor that was being passed around. We said our goodbyes and headed to our hotel in the nearby town of Dazhai (大寨). 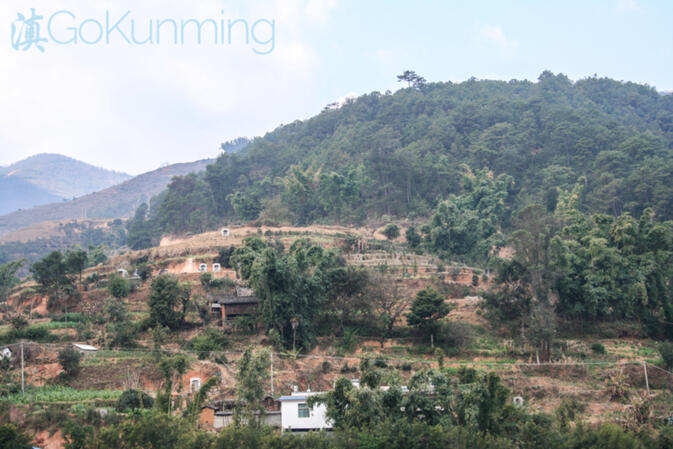 Brutally early the next morning, 4:45am to be exact, we boarded the bus that would take us back to Lincang's not-quite-so-international airport. What little conversation there was at that hour revolved around how virtually everyone we met in the village had invited us to visit their home and share a meal. It was a difficult little place to leave.

Following a quick stop for breakfast and once again aboard the bus, we realized it was the birthday of one of our motley crew. For the first and only time during the entire trip, we all started and finished a song together. 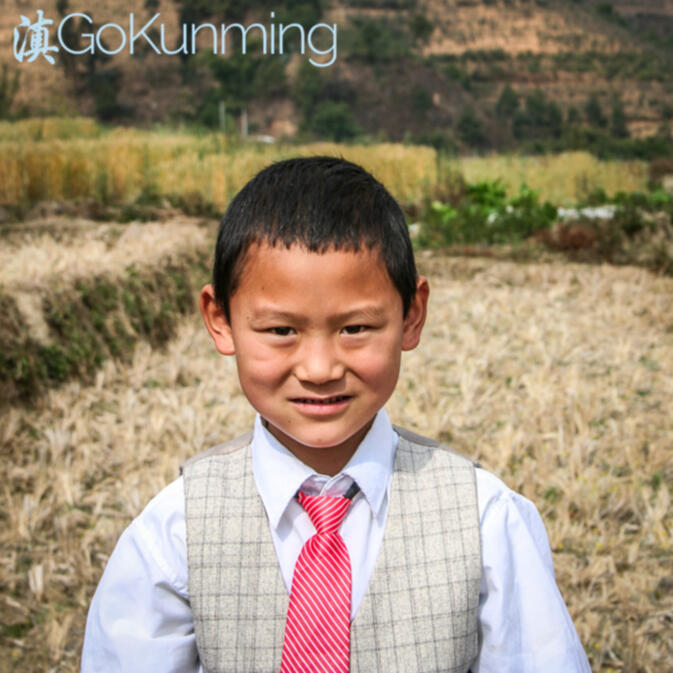 Wonderful! A lovely reminder of Yunnan as snow falls on French soil outside my window.

Mike, A Qin, you guys are beautiful and I treasure your friendship. Sorry I couldn't be there for your wedding, but we'll catch up again sometime.

Congrats to the happy couple and families. Hope it last for a lifetime.

Very different kind of article. More like this, please. Congrats to you!

YAAAYYY Mike and A Qin!
Wish I could have been there to celebrate with you!
See you guys soon!
Love
Kasey

And it was all good. Congratulations & best wishes always!

Yeah, a few more articles like this one, which connect real people in the foreign community with real Chinese people (despite occasional cultural unfamiliarities), rather than the simple recounting of relationships involving stereotypical misunderstandings on both sides that often appear in the forums.

great story, thanks for sharing! Attending a wedding in the countryside is such an amazing experience. Mike and A Qing, you look gorgeous!! I wish you all the best for your life together

All the best to you Mike and your lovely wife. Next stage is children.

P.S. Was that suit rented?

Congratulations. All the best for the future.

Great story and great pictures! Congratulations to Mike and A Qin!

Hi, Mike. This is Joe. Congratulations..... all with my best wishes!
(Xishuangbanna)