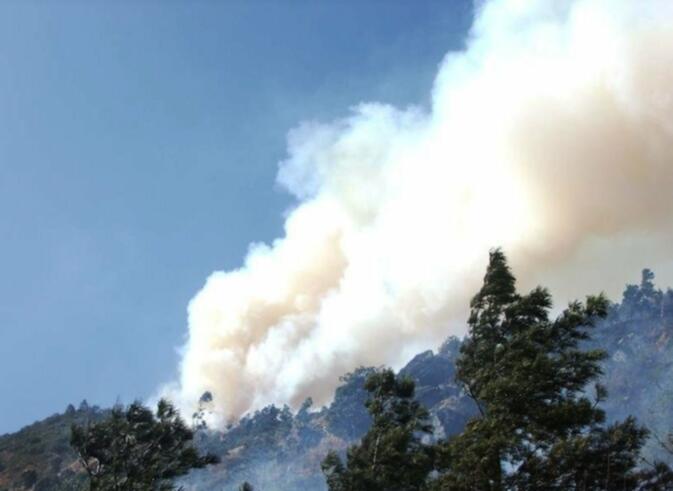 A weekend wildfire, thought to have been intentionally set by an arsonist, has burned a large swathe of forest on the Cangshan Mountains (苍山). Emergency firefighting crews eventually extinguished the blaze with help from hundreds of volunteers and the assistance of a helicopter.

The fire was first reported on Saturday around midnight on the slopes of Sunset Peak (斜阳峰), a section of the Cangshan massif located southwest of the city of Xiaguan (下关). By 6am Saturday, 408 professional firefighters from around Dali Prefecture had been deployed to battle the fire.

Firemen were assisted by more than 1,000 other municipal employees, including detachments from the Dali police department as well as civilian volunteers. Fifteen pumper trucks were also dispatched to the site of fire. Because of high winds, steeply sloping terrain and dry brush conditions, the blaze was reportedly difficult to control. 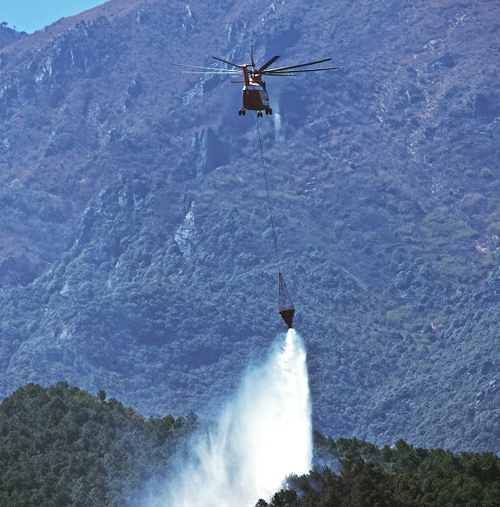 A Chinese M-171 utility helicopter equipped with a collapsible bucket was dispatched later in the day from Baoshan (保山). Using the gigantic bucket, the helicopter crew scooped water from nearby Erhai Lake and then dumped it directly on the blaze. Pilots also doused surrounding forest with water to prevent the wildfire from spreading further.

Officials coordinating firefighting efforts determined the utmost speed was needed not simply to control the spread of the fire, but also to keep hundreds of graves located on the mountain slopes from incurring any damage. For these reasons they decided use of the helicopter was necessary.

The fire was under control by Sunday at 6:30pm and two hours later was reported extinguished. Firefighters remained on the scene overnight as a precautionary measure to ensure flames did not reignite from undetected embers. In all, nine hectares of pine forest were consumed in the wildfire.

Media reports mentioned the fire may have been purposely set. Police have identified a mentally ill man as their only suspect and are currently in the process of questioning him. Charges are pending following the conclusion of an official investigation.

That bucket was bought from Canada

@mike4g_air, I think you're right. Is it called a 'Bambi Bucket'?