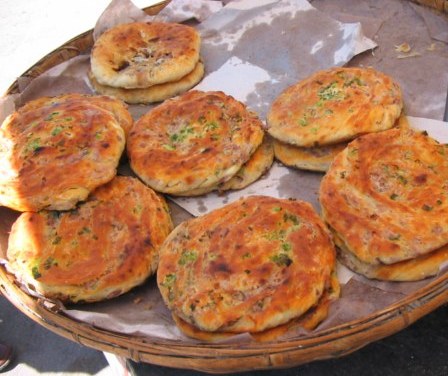 Nearly every country in the world has its own version of bread. China is no exception, and breads such as mantou (馒头) and baozi (包子) are available virtually everywhere. Chinese bread often resembles a Western roll, although one stuffed with various meat of vegetable combinations.

In contrast to western baking traditions, baozi are steamed in stacked bamboo or metal baskets and no oven is necessary. But China is also home to an extraordinarily versatile bread simply called baba (粑粑). One version of Kunming's take on this style of bread is tasty and bares a fare resemblance to its Western cousins — Guandu baba. 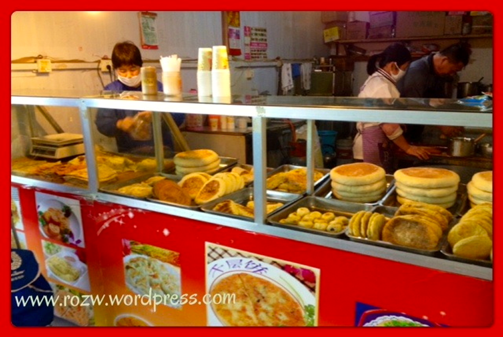 This type of baba is a yeast bread, made in a neighborhood market near Guandu Old Town out of a 40-square meter bake shop. It is not your traditional sliced Western loaf, but instead is a 10-15 centimeter round. Since discovering this bakery, we have made friends with the couple who own and operate it. They have obligingly exchanged bread-making secrets and taught us their methods.

No matter where people live in the world, if they make bread, work starts way before customers get a hankering for bread — usually before the sun comes up. Our baker friends, who come from northeastern China, are no different. Mr Wang and Mrs Bi start their loaves rising at six in the morning and continue to bake and serve customers until the last of their daily supply has been sold — often around eight in the evening. 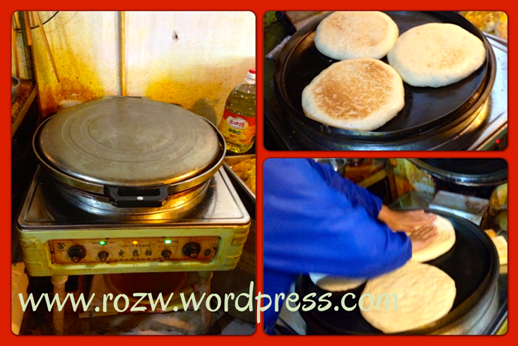 Although Westerners often assume the Chinese predominately eat rice or noodles as their starch of choice, there are a great many varieties of bread products from which to choose as well. What starts off as basic dough can easily be changed by using wheat or rice flour, mixing in spices, varying salt, oil or sugar amounts, and adding other ingredients such as eggs and vegetables.

Mr Wang and Mrs Bi use one small grill-type 'oven' to bake their many varieties of bread. Interestingly enough, a temperature of 150 degrees Celsius was used for all products — baking times shortened or lengthened depending on the bread. Somewhat amazingly, the two never use a timer. After much discussion about the correct name for this oven, we determined it is called a bingcheng (饼铛) — literally "baking pan". 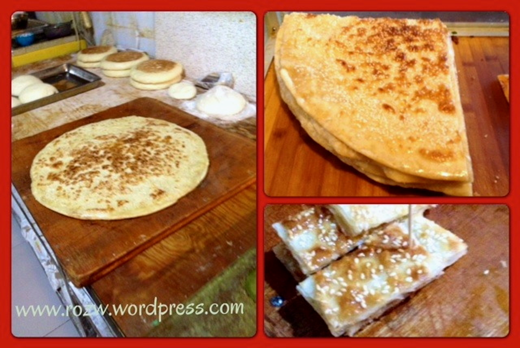 Guandu baba dough consists of wheat flour, water, yeast and a very tiny amount of MSG. The dough is mixed and shaped into larger than fist-sized discs, placed on baking sheets and set aside to rise until they double in size.

The baking procedure is simple. Three baba at a time are placed on the bottom of the oven — a very lightly oiled surface – and flattened by hand. Then the lid of the 'oven' is closed. The loaves bake on one side for five minutes and then are turned with wooden tongs and cooked on the other side for another two minutes with the lid closed. 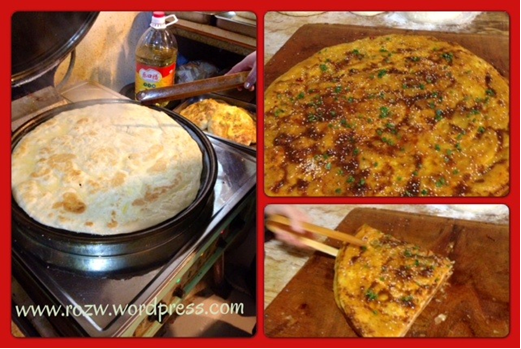 This dough is also used to make large flat pancakes rolled out with a long, heavy rolling pin. More oil is added and the first pancakes come out of the oven quickly, then are sprinkled with sesame seeds. They are then cut into small bits and put into plastic bags accompanied by a toothpick to assist in snacking. The same pancake morphs into a spicier snack when a mixture of chili sauce is spread on top and then sprinkled with sliced green onions.

By 9am, the bakers have usually baked about 30 baba, as well as many other kinds of bread and a nice warm soybean milk. Around noon, the couple makes another batch or two of dough and continue to bake bread throughout the day. This way they can keep their booth stocked with the fresh, tasty morsels their customers have grown to love over six years of business in Kunming. 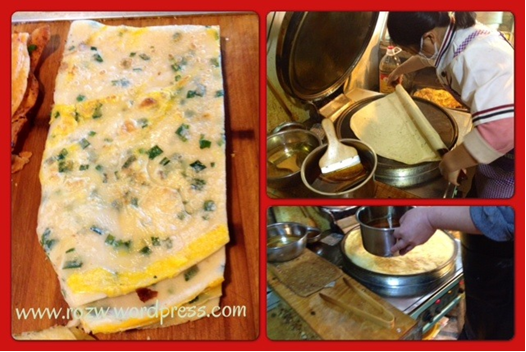 We wonder if they have plans to expand or sell their business. Just a few weeks ago the couple had two new workers and Mr Wang seemed to be teaching his sister-in-law and nephew how to do what he and his wife have been doing for so long — baking baba and other traditional street snacks.

We hope they have plans to make their business bigger rather than sell it. Our hats off to this talented couple who are like so many others in the same profession all over China. They work incredibly long hours in cramped quarters. Nonetheless, their recipes are passed down from generation to generation and utilize simple ingredients, utensils and equipment to feed the masses with consistently delicious bread.

Very nice article! I think I will go down south and try it out. Keep up the good work!

What a terrific article! This is the sort of thing that encourages people to delve deeper into Yunnan — delve deeper and come up not only with something new, something often seen, and something delicious!