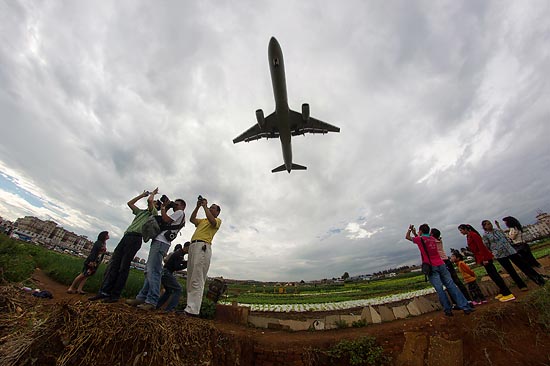 When design plans were first announced for Kunming Changshui International Airport in 2006, expectations were high that the 33.5 billion yuan facility would help transform the Spring City into an international tourist hub. Those aspirations appear to be coming closer to reality as several airlines are vying for new Kunming routes.

The largest company looking to expand its presence in Yunnan is China Southern Airlines (CSA), which currently has only four aircraft devoted to the province. It has recently established a branch company in Kunming which will explore how best to capitalize on Yunnan's rapidly increasing aviation sector. Negotiations between CSA and Changshui authorities are ongoing, but "basic resolutions have been agreed upon" according to an unnamed source quoted in local media reports.

Discussions between the two parties may hinge on whether the carrier is willing to designate Kunming a 'focus city', of which CSA currently has 14 — the closest to Kunming being Chongqing. Any agreed upon framework must also garner the approval of the country's airspace authority, the Civil Aviation Administration of China (CAAC).

China Southern is Asia's largest airline and operates a fleet of some 500 aircraft. In 2012 the company accommodated 86.5 million passengers. Despite such reach, the airline currently holds less than twelve percent market share of Kunming air traffic, trailing both China Eastern Airlines and Lucky Air. Any expanded presence in Yunnan would presumably link passengers to CSA's mammoth worldwide network, which includes stops in 193 cities in 35 countries.

China Eastern is also increasing its presence in the province, adding nine planes to its Yunnan fleet earlier this year. The move was seen by industry experts as a counter to both Lucky and Xiamen airlines announcing their intentions to separately increase the number and frequency of flights into Yunnan.

Ruili Airlines, a private start-up company just recently approved by CAAC, is in the process of purchasing a small fleet of mid-sized Boeing 737s. The regional carrier is expected to go into operation in the spring of 2014.

Furious expansion by multiple carriers into Yunnan is expected to dilute the market considerably. Ostensibly this could force a pricing war as companies fight for the attention of travelers and lower the cost of air travel into and out of the province in the process.

It would be fantastic to get direct flights to Europe.

United has already announced direct service from Chengdu to the US via San Francisco to begin this spring; it would be great to see Kunming added as a non-stop US destination soon as well!

At least one for us Antipodeans would be pretty fabulous as well... Kunming - Sydney/Perth/Melbourne/Auckland would be fantastic...

Yeah a European directflight would be fantastic, sweet!
But as far as I know (I was told) and spoiler alert....the landing, processing and fuel fees are so gigantic in Yunnan, (of course primarily for foreign airlines) that this guy told me the ticket price would be ridiculously high, after the promotion period.

He estimated that if the airport fees won't be lowered it would still make more sense financially to fly through other 'real' hubs.

Hopefully this stupid and untrue philosophy of, 'charge high - gain high profit' will change someday so that we get the perks of a normalized market. Until then I try to not use the Changshui airport, it's China's worst airport by fay, anyway.

Now that Air Asia is flying to BKK Thai Air is reducing flights. So I am not sure if more competition will be good for the airlines in the long run, Yunnan is just not that big a market.

I wonder if Oz will ever be a direct flight away. Definitly Kunming is not currently planning European flights, that destination is for Chengdu and ChongQing to expand.

I don't think you guys get it - air travel, as practiced since the great increase over the past 15 years or so, is simply environmentally unsustainable, full stop.

It looks like Thai has only reduced flights by one day a week; they're just not flying on Mondays anymore. China Eastern has also increased capacity to two flights per day to BKK instead of one on Sunday, Tuesday, Wednesday, Friday, and Saturday. However I'm not necessarily a fan of China Eastern as I know many of us aren't, and what I would really like to see is Thai bring back their old twice weekly service to Chiang Mai, which I used to fly regularly up through 2008 until it was cancelled. China Eastern being the only non-stop option to Chiang Mai for several years now has not been fun, and considering the explosion of Chinese tourists there now I'm surprised Thai hasn't resumed the route, especially since it was the regular Bangkok flight that just made a stop off twice each week...

More direct flights (full ones) that do not require excessive connections as well as flights on smaller aircraft that do not go as fast or so high into the troposphere are actually net advantages to helping combat the negative influences of air travel. And yes, the current form is arguably unsustainable, but advances in aircraft design, fuel efficiency and better logistics are easing the burden somewhat. Telling people not to fly is probably pretty ineffective... most of us got here that way. But telling people to fly smarter and more sustainably might work.

@Alien if you cannot stop people from driving there cars 1-2 blocks to the store to buy a carton of milk how are you going to stop people from flying. Airlines are big business and china is spending big money on new airports so i do not see airline travel slowing anytime soon. I walk, ride my bike for groceries and take bus from North to Nanya shopping mall for work, and only take car as a last resort, but i will not stop flying to USA once a year to see my family.

@atwilden: well, flying smarter is something, anyway - flying less is better. Anyway,m what interesting things usually happen to you on an airplane? Virtually nothing, would be my guess. People shortchange themselves.

@tallamerican: Of course I can't stop people from driving/flying all the time, at least not by myself, but I can slow the damage by limiting my engagement in it myself, and perhaps at least make others aware of the problem and hopefully awaken them to their responsibility for what they do - many people will, in fact, take some responsibility for their actions once the consequences are pointed out to them, it's the avoidance of conscious thought, about issues that are not all that hard to make objective judgements about, that constitutes the human lemming instinct that gets us into such trouble, and that is manipulated by those who couldn't care less about us or anybody's future, for what they see as their own short-term advantage.

Take a look at "Free Energy" on line, or better yet on YouTube if you are smart and use... pay for... a VPN like Astrill. We are getting very near to enjoying the use of the super cheap electrical energy that Tesla developed over 100 years ago. Why do you think all the car companies are focusing their energies on electric vehicles? Electric jet engines are clean, much more efficient, and much cheaper to operate.

America the energy country, and the banking rich, have been thwarting this technology ever since J.P. Morgan did, back in the early nineteen hundreds. He asked Tesla, "How are you going to put a meter on it and charge for it?" At that time electric cars were the norm. The gasoline engine hadn't even been invented yet.

America, England, France, etc.are spending billions on developing this energy and bringing it to the grid, where they can continue to charge and tax for it. Check out what Oak Ridge is up-to. If you are an individual and you bring out a workable, free energy product, you will be, immediately, killed. True! But if you are an honest government and you release it, you will change the world!