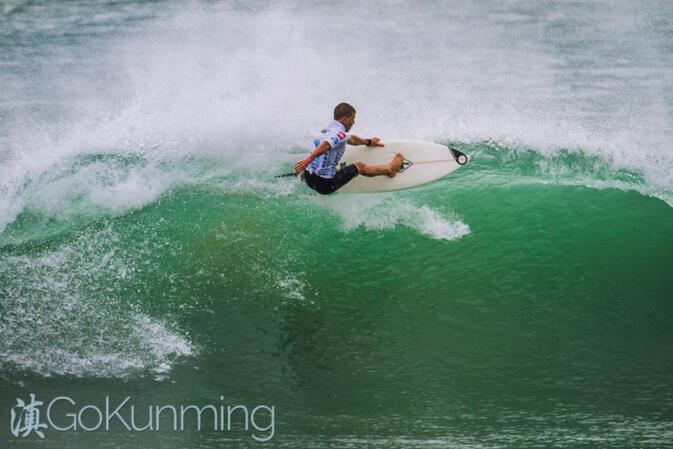 Hainan (海南), China's smallest province, lies just off the country's southern coast and is often perceived by travelers as an overcrowded tourist trap. The cities of Sanya (三亚) and Haikou (海口) both receive millions of tourists each year and are increasingly drawning unfavorable comparisons to overdeveloped Thai destinations such as Phuket and Pattaya.

But visiting Hainan is not all packed beaches and frantic shopping, and at least one of the island's lesser known beaches is welcoming a new type of international traveler — surfers. We recently went to check out Riyuewan (日月湾), or Sun-Moon Bay, which is tucked away in a somewhat remote southeast corner of the island. There we hoped to find something a bit less touristy, ideally with uncrowded waves. 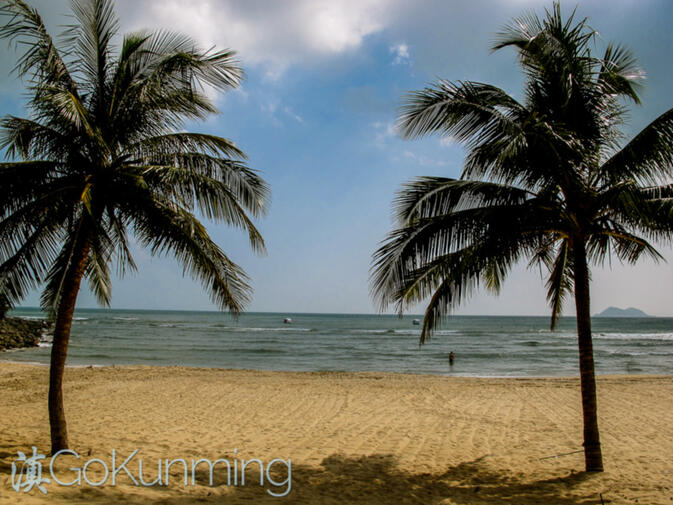 A quiet day at Riyuewan

Hainan's surfing pedigree is still relatively young. A little over a decade ago, Japanese surfers were some of the first foreigners to journey to the island in search of waves. Since then, a small but growing number of enthusiasts have been scouring the island for empty beaches and lonely surf. The water temperatures are tepid most of the year — usually between 23 and 30 degrees Celsius — except for winter, when the waters turn even cooler and wearing a wetsuit becomes mandatory.

The winter months are nonetheless an ideal time to visit, as Hainan's primary surf season lasts from October to March. Solid swells create waves consistently over four feet to the island's east coast. Typhoon season from May until October can often churn up classic surf, with waves cresting at ten feet. 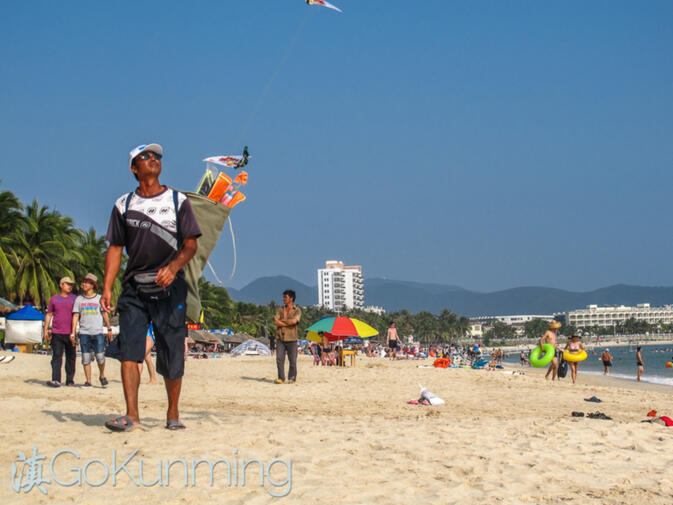 A busy beach in Sanya

We blew in to Haikou airport late at night and after collecting our bags, did the routine taxi haggle and began our two-hour journey to Riyuewan. As the taxi belted down the highway, we sat back and enjoyed the warm, humid, equatorial air rushing in and out of the windows. We had certainly left Kunming's late autumn chill behind us.

We checked in to our rooms and could not help but notice the hotel's endearing Chinglish room manual. Under the heading Rules and Regulations of the Hotel it read: "Guests taking firearms and ammunition along, should them to the local Public Security can be used."

We quickly examined our pockets and bags to make sure we weren't packing. Handy telephone numbers were also listed: "Hospital 62552333, Time 117, Robbing 110." Closing the helpful manual, we drowsily hoped we would not have to call "Robbing", and then crashed out for the evening. 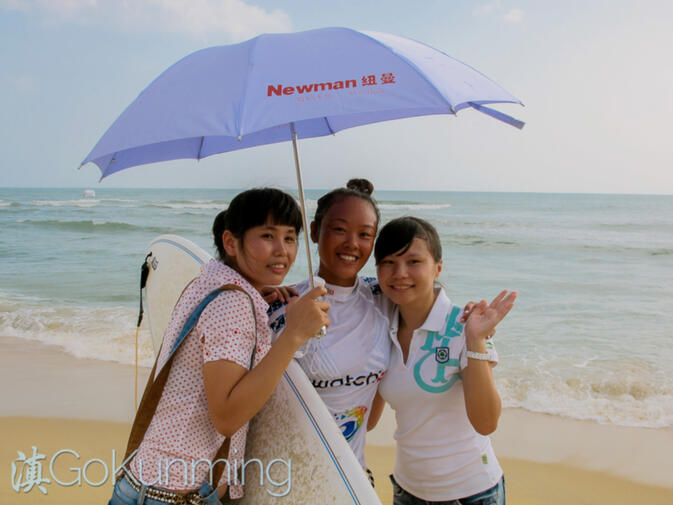 Riyuewan has everything a surf bum could hope for — a long sandy beach free of garbage, palm trees providing shade and waves rolling onto the shore. After a peaceful sleep completely free of robbing, we headed down to check out the water. At the beach we were welcomed by three foot waves rolling in deliciously from offshore. There were only three other surfers already out in the water.

Our first mission was to hire a surfboard and test-drive the beach breaks. We were helped out by Brendan Sheridan, a Californian who grew up in Hong Kong. After establishing Surfing Hainan (冲浪海南) in Sanya five years ago, he moved to Riyuewan to find better waves in a quieter location.

His store rents a quiver of long- and shortboards, both for 100 yuan per day. He helped us get equipped, showing us the different boards and a variety of wetsuits. Sheridan's shop also teaches surfing lessons for novices and the place has its own budget dormitories starting at 120 yuan per night. For surfers more skilled than us, they offer day trips to hidden breaks nearby. 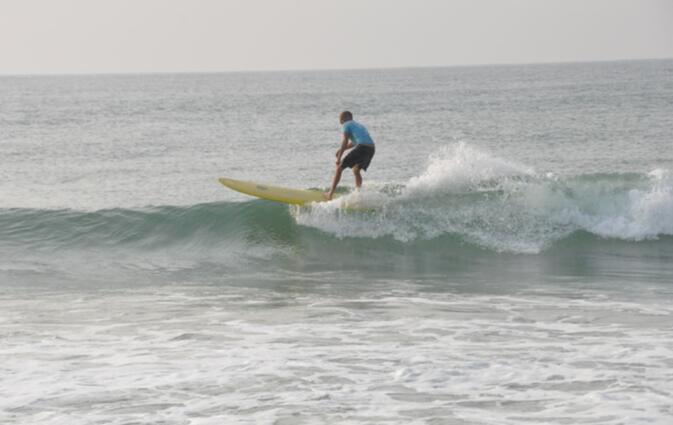 Properly kitted out, we spent the day exploring the different breaks Riyuewan has to offer. The surf was good and the water a clean emerald green. By late afternoon the surf had risen and pulsing four-foot waves became commonplace.

Exhausted, we retired to Surfing Hainan headquarters and joined Sheridan for a seafood dinner. We asked if the surf ever died down. "Even in April, which is our off-season, we still get thigh-high waves. They're perfect for learning...and a lot of fun on a longboard," he explained.

The area's consistent surf is drawing more and more international attention. In October 2011, the town hosted Hainan's first ever major surfing event, the 2011 Swatch Girls Longboard Pro. That event was followed in early 2012 by the men's ASP Hainan Classic. The competition was such a success and the surf so reliably good that the event returned a year later. 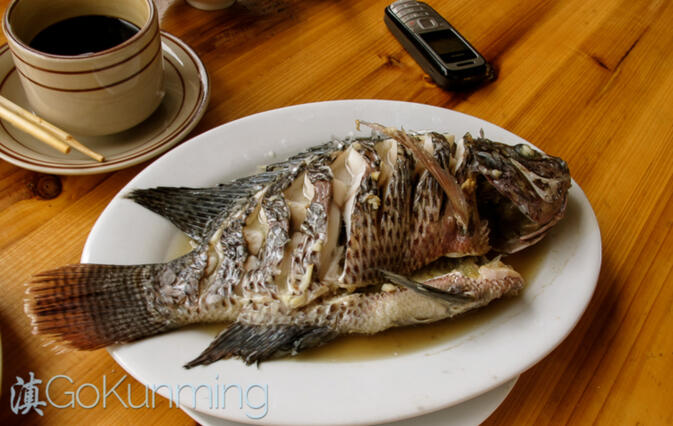 Taking a break from the surf

All along the beachfront there are street stalls serving shaokao (烧烤) as well as a nice selection of seafood restaurants. Prices were a bit high along the beach, so we tended to go into town to eat. Hainan cuisine differs significantly from that of the mainland, and is generally less spicy, lighter on the palate and often sweet with strong hints of garlic.

Two of the island's specialties are coconut baozi (椰丝包) and Hainanese chicken and rice (海南鸡饭). Most of the population live inland, away from the coast, meaning seafood is not the only culinary option. Strong Hainan coffee with condensed milk is a good shot in the arm before a morning on the board. 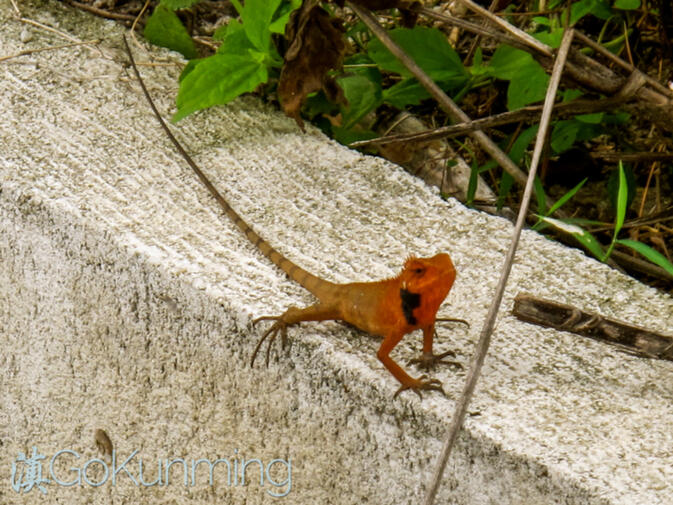 For those wanting a break from wave-riding, Riyuewan has all sorts of other outdoor activities. Generally on Hainan, 18-hole golf courses and their attendant resorts and spas are never far away. Cycling along the coast is also a popular pastime, as are nature hikes through nearby rainforest and wilderness reserves.

For us, however, the beach was the place to be. Riyuewan is not yet a well-known tourist destination, although the sleepy town and its long stretches of sand could be soon. Despite having access to rainforest tours and all manner of indulgent resorts, the beach, and the surf, kept calling us back. 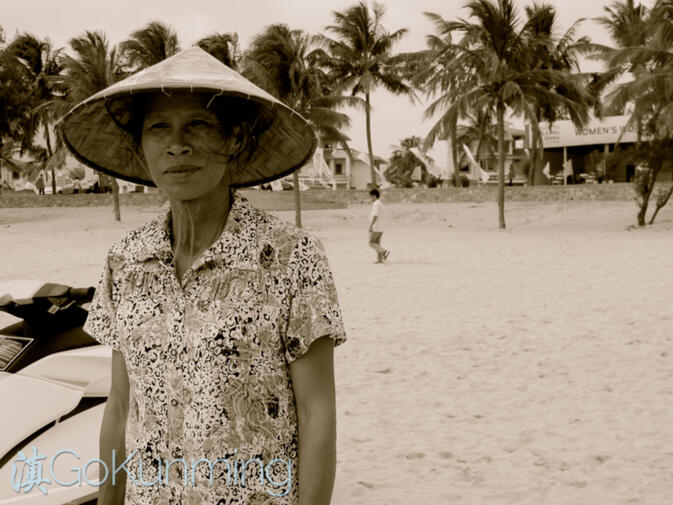 A local woman enjoys the view at Riyuewan

Lucky Air flies daily to both Sanya and Haikou from Kunming Changshui International Airport (昆明长水飞机场). When we checked ticket prices for December 2013, they started at around 950 yuan round trip to Haikou and 1,160 yuan to Sanya. These prices are of course subject to change.

Riyuewan is located on Hainan's southeast coast, and accessible by car on the eastern section of the Hainan Ring Expressway (海南地区环线高速公路). The bay is 120 kilometers north of Sanya and 240 kilometers south of Haikou. A taxi from Sanya to the Riyuewan will take about 90 minutes and should cost between 250 and 300 yuan. From Haikou the price will be a bit higher — around 300 yuan for the two-and-a-half hour drive. 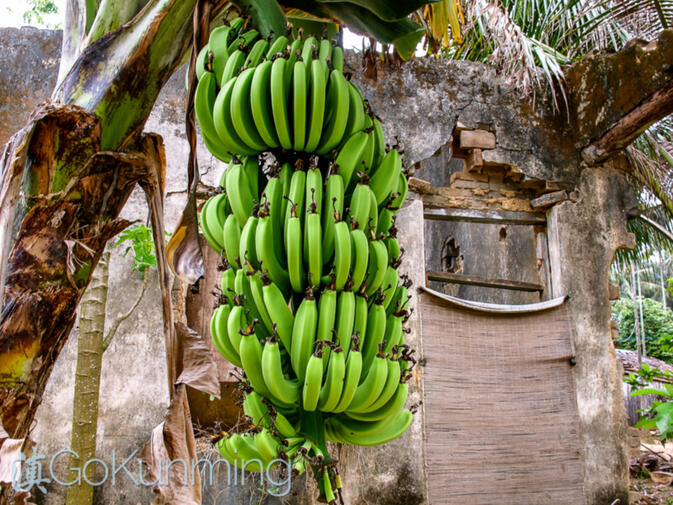 Hainan also has a high-speed railway, which can be boarded in Sanya or Haikou. Tickets from those two cities to Wanning Station (万宁站) cost 32 and 52 yuan respectively. From Wanning to Riyuewan, the 55-kilometer taxi ride should cost about 80 yuan.

There are no buses that go directly to Riyuewan, but from Haikou's South Bus Station (海口客运南站) one can take a local bus bound for Lingshui (陵水). Tell the bus driver to stop at the Riyuewan exit on the expressway. The bus ride takes roughly three hours, costs 60 yuan, and drops you just five minute's walk away from the beach.

Wonderful article - hope to experience the locale before it becomes horribly commercialized. Aside from the chinglish - you didn't mention too much about hotels and accommodations? Standard no frills business hotels are the norm?