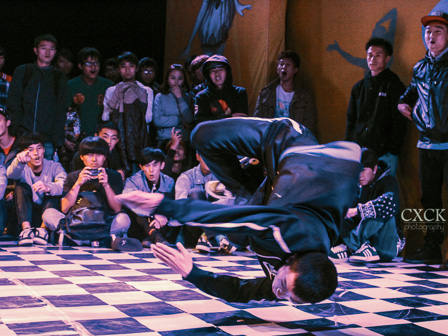 Neon lights flash across the hastily put together stage as a barely audible whisper floats through the umbrella covered crowd. With enough imagination, one could say this whisper is the worn out after-thought of a cheer. Two grown men stand facing each other on stage, arms crossed and eyes aimed to kill. The scene bears a striking resemblance to a Wild West shootout in the rain, except snapback caps have replaced cowboy hats and Converse All-Stars have been substituted for pistols.

The steady and rapid taps and snares of funk and breakbeat music stream in the background as tension steadily grows. Suddenly, with a blur of motion, the man on the left steps out and whips his leg, spiraling in a smooth and calculated spin, landing again on one foot, then steps upright with his arms crossed. The crowd pops out of its silence into a fury of whistles and screams. The exchange has begun. 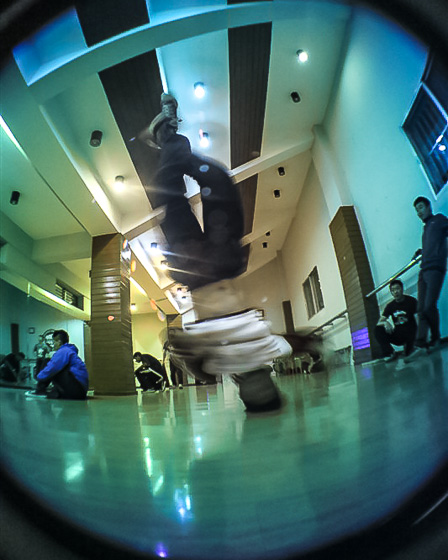 Always one for flashy introductions, breakdancing veteran B-boy Ryan, aka B-boy Xiao Bai (小白), continues his assault with a slew of confident toprock — the portion of breakdancing that is done standing and is most similar to other forms of dance. He then transitions to the floor for an onslaught of footwork — the circular dance steps done on the tips of feet and fingers that is considered the signature of breakdancing. A series of power moves come next, many derived from martial arts and gymnastics.

Xiao Bai whirls and steps with the balance and self control of a ballerina coupled with the attitude of a grizzled war machine. He finishes on the beat in a contortioned freeze of the body, balancing on one hand for five full seconds. Even with the pounding rain, a burst of appreciation escapes the crowd and Xiao Bai briefly smiles, reminded of why he has dedicated so much of his life to dancing. The smile is cut short as his opponent also flashes a smirk before launching into his own set. 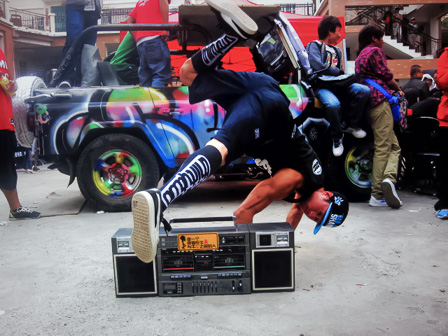 For the general population, breakdancing is a relic of the 1980s in the United States and conjures images of Adidas tracksuits and flattened cardboard boxes. To some it is a hackneyed category of dance bringing with it negative connotations of derelict Brooklyn ghettos and gang warfare, occasionally revived in overly publicized corporate competitions and movies.

What many don't know is that breakdancing has become a diverse culture. It has expanded its influence to all areas of the world, largely under the mainstream radar — giving the disadvantaged, the disenchanted, and the ambitious a chance at self-expression, recognition and possible financial success. 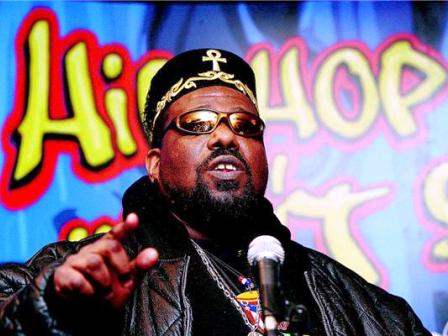 Breakdancing is one of the four original elements collectively known as Hip-Hop culture — b-boying, MCing, DJing and graffiti art. It all started in the late 70s within neighborhood clubs in South Bronx. Influential DJs such as DJ Kool Herc and Afrika Bambaataa hosted large parties as an escape from economic deprivation and gang warfare. Bambaataa noticed how many people at his parties waited eagerly for the break portions — the drum solo or a change in drum pattern after the second chorus — to show off their dance skills.

He then distilled the heart-racing snares and high hats of the drums and placed them in a loop, creating the first break-beat. Kids would show up just for these breaks, and b-boying — or break-boys — were born. Bambaataa's parties grew more and more extravagant and the influence of b-boying widened it's scope, soaking up cultural influences as other New York minorities took up the new trend. 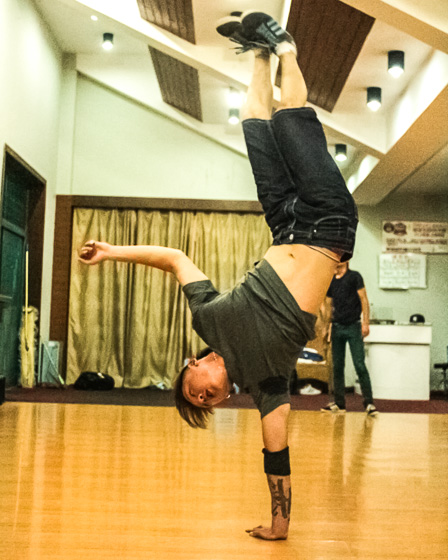 Then the media noticed, dubbing the trend 'breakdancing', which is today considered a derisive term for the talentless. The new-found fame offered b-boys a life of money, fortune, and renown. Unfortunately, the press was not looking for a long-term relationship and dropped b-boying for the next hot item. This left practitioners once again scrounging for money. Throughout the late 80s and early 90s the culture became a fad of the past.

Yet the principals from which Hip-Hop was created spoke loudly to people in other countries. b-boys from Europe took the art form and made it their own, creating new moves and styles that they then brought back to America. This spawned an entirely new style on the West Coast and a new era emerged with the advent of YouTube and social media. Videos of competitions that were once hard to come by and took months to track down were now universally accessible within days of an event. 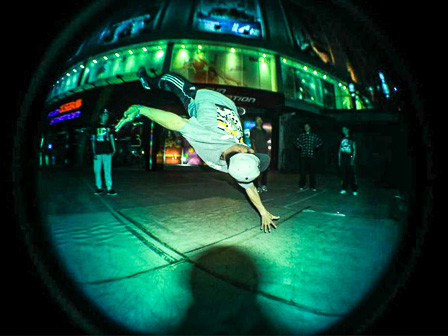 In the early 2000s this form of expression finally climbed past the Great Wall of China and reached the many of the youth not already en route on the archetypical college-job-family path. It spoke loudly to a portion of the balinghou (八零后) — a generation born post-80s — who grew up in a society vastly different than that of their parents. Many future b-boys saw this arrival as a creative outlet in direct violation of what Chinese culture expected, as well as an alternate path to success and personal freedom.

Crews began to form in Beijing and Shanghai, as new b-boys strove to reach the level of already established world-class stars. Not having direct access to Youtube and many other international resources, Chinese enthusiasts were forced to learn things on their own and without much knowledge of the culture or history of breakdancing. This resulted in a period where the Chinese were mocked and ridiculed by international dancers for not having a foundation and lacking creativity. In 2005, with the increase in China-based social networking, the country saw an explosion of dance studios, largely due to the rise of Korean Pop music. This also lead to serious growth in b-boying, as many dancers were unsatisfied with the ease and rigidity of choreographed dancing. Soon, it started spreading like wildfire, eventually reaching past the mountains of Yunnan and making its way to Kunming.

While Kunming is the largest city in Yunnan province, it is historically known for being a bit of a cultural backwater and is generally slower to accept new trends than its eastern cousins. This also pertains to the growth of the province's underground dance scene. Nonetheless the first big Spring City crew was formed in late 2005. Kings of Ghost Street (KGS Crew) is considered one of the founding groups for b-boying and Hip-Hop dance in Kunming. Alongside DJ DSK, a European DJ who really enjoyed break-beats, they made an impact by hosting Hip-Hop nights at the now-defunct Speakeasy Bar and opened their own dance studio. New crews started forming as students became teachers and dancers warmed to the financial potential.

In late 2010, KGS disbanded. New crews stepped in to fill the void. Many crews saw that the learning curve to b-boying was too high and many new dancers were not willing to commit. As one instructor from a dance studio told GoKunming, there is simply no money in strictly b-boying in Kunming. The real money comes from choreography. Yet there are still some crews in Kunming who believe b-boying is an art and strictly adhere to specializing in it. The aforementioned B-boy Xiao Bai is one of them. A native of Dali, he comes from a depressing background as the son of an opium smuggler. In late 2004 he came to Kunming with 600 yuan and a scooter. He worked hard at several low-end jobs, occasionally going to dance studios with friends when he had time.

A year later, already discontent with the usual K-pop routines being taught at studios, Xiao Bai went to a Hip-Hop competition. At the competition, when the b-boying section started, Xiao Bai was astounded by the complexity and athleticism of the dances. He soon traveled to Guangxi to practice with BSC Crew, to Chengdu to practice with Flo Crew and to Beijing to practice with the famous STO Crew. Working during the day and practicing late into the night became habitual. Since then, Xiao Bai has practiced with dancers from around the country and has reached a skill level where event organizers from other countries ask him to participate in or judge their competitions. He has also formed his own crew and has a small dance studio in Kunming near Jinbi Lu that only teaches b-boying. While the number of students he has is considerably lower than other, larger studios who focus on different styles, he's content.

Xiao Bai says the benefit of his studio is that he can help unfortunate youths find a healthy and active lifestyle, as well as teach the art form in what he considers a pure manner. The main method of making money, according to Xiao Bai, should be the 'b-boy way' — winning at competitions and carving out a name. We asked him if he would ever consider being part of a more successful crew. He answered that while money is important, he wants to make it on his own terms as a dancer. When asked to describe b-boying in Yunnan, he says that while Yunnan is more of a "backwater" than the big cities and gets everything "second-hand", many of the dancers are influenced by their minority heritage. As the province with the most minority groups, many in Yunnan add bits and pieces of their culture into their dances. This, he says, is one of the essences of b-boying — adapting and integrating other traditions to create new styles and moves.

It is because of this originality and passion that Xiao Bai hopes one day, when Yunnan b-boys have achieved greater notoriety, they will make bigger international names for themselves. Meanwhile, he is trying to host more competitions to get the word out. Xiao Bai is also working on winning more competitions himself, improving his guanxi and looking ahead to the day when his chosen art form will be more extensively recognized and appreciated.