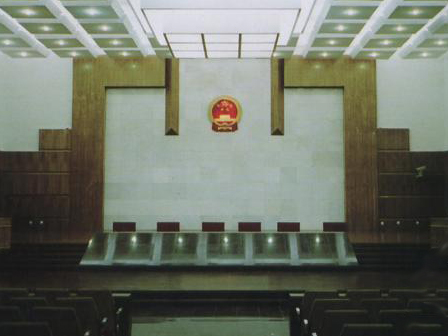 A Kunming court established to try cases exclusively regarding the environment is still struggling to make a name for itself five years after being founded. In a story originally published by newspaper City Times, the Kunming Environmental Court is characterized as understaffed and largely unknown to the general public.

The idea to create the Kunming Environmental Court was originally proposed in September 2008 as news of heavy arsenic contamination in Yangzonghai (阳宗海) was breaking. The court is now subsidiary to the Kunming Intermediate People's Court.

At the time of the Yangzonghai scandal, legal experts bemoaned the fact that Yunnan had no institutional body to deal with crimes against the environment. The China Environmental Law Blog characterized the Yangzonghai case as symptomatic of an enforcement problem:

...this wasn't a case of turning a blind eye to polluters, it was a failure of the regulatory system to provide sufficient disincentives to pollution. In other words, the lake is polluted with arsenic because even maximum penalty amounts are so "trivial" that it makes economic sense to "pay to pollute."

That analysis is echoed by Wang Xianghong (王向红), presiding judge of the Kunming Environmental Court. Wang told City Times that before her court was established, fines for companies found guilty of contaminating were lower than the cost of ending the pollution. Her court is trying to change that and has handed down substantial fines in its rulings, the largest of which was a 4.17 million yuan (US$684,000) verdict in a Songming water pollution ruling.

With a full-time staff of only six people, the court has accepted and presided over 106 cases throughout its relatively short history. It is also tasked with monitoring the rulings of five lower environmental courts, which have heard an additional 330 lawsuits.

The tribunal is currently hearing testimony regarding the Dongchuan 'milk river'. Eight mining executives stand accused of intentionally dumping tailings into the Xiaojiang River in northeastern Yunnan, which caused the water to run white.

Highlighting the limitations of the court, judge Wang was dispatched to personally collect water samples from the river for evidence. She said activities such as this are fairly common as locals in polluted areas often lack the money or technical knowledge to collect and test specimens that can be presented as evidence.

Even when evidence has been gathered, it is the Kunming government, not the individuals who have been affected, that files a lawsuit. Most people in Kunming — 70 percent according to a local survey — are unaware that the Environmental Court even exists. Wang was quoted as saying that in her five years as head of the court no community has come forward to bring a lawsuit.

Wang believes this situation is due to a lack of exposure for the court as well as people's reluctance to take on wealthy companies. However, she is optimistic that over time Kunming residents will use the court as a tool to fight pollution: "More organizations and people should be involved to broaden the scale for public-interest litigation. That's the way to encourage people to use judicial channels."

Amazing! The judge had to go and collect evidence herself! Absolutely classic! Who then, in such a case, is on the side of the environment? Seems like the court was prosecuting people without a plaintiff? Because surely the plaintiff or prosecution bench at least would be going out and getting evidence to support their case...

Regardless - long may this court exist and greater may its power grow!

If the 6 people on this court's staff are indeed serious about what they are trying to do, I really feel for them, as the priorities for 'development' run straight counter to them. Keep up the good work, and perhaps it might be best if these folks didn't keep too much booze around the house, especially if they live alone.

This should certainly be one of the most important court houses instead of the most obscure.

I thought the guys responsible for polluting the Yangzonghai received the death sentence, but I might have been wrong. Anyone information on this?

I think all these things they are doing to create a controversy.
www.aerofixcycles.com