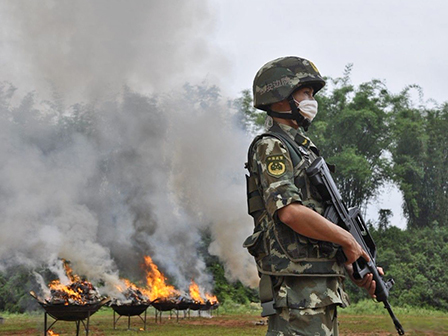 A soldier stands guard as seized drugs are burned in Dehong

Yunnan has long had trouble policing its 966-kilometer border with Myanmar. Stemming the flow of drugs out of the Golden Triangle into the province is costly, time-consuming and has, in the past, been confused by a tangle of legal issues.

Increased international cooperation began in 2011 between the drug enforcement agencies of China, Laos, Myanmar and Thailand following the murders of 13 Chinese sailors on the Mekong River. Cross-border police collaboration has been credited with multiple high-profile seizures. Despite such successes, drugs continue to flow across Yunnan's border, and by the size of recent busts, appear to be arriving in record quantities.

Last month police in Xishuangbanna arrested two men attempting to carry more than 100 kilograms of methamphetamine across the border from Myanmar. The men were driving two cars loaded with drugs estimated to have a street value of 30 million yuan (US$4.95 million). Guns and more than 100 rounds of ammunition were also confiscated. The two were reportedly promised a 1.2 million yuan delivery fee upon their successful arrival in Jinghong.

Officers in Lincang have also been busy recently. A man was apprehended in the southwestern prefecture with ten kilograms of heroin on October 26. Earlier that same week, two separate drug cases were concluded in Cangyuan County when five men were arrested while transporting 36 kilograms of heroin into China from Myanmar.

The seizures in Xishuangbanna and Lincang were part of a "one hundred day campaign" against illegal drugs by Yunnan police. The operation — which ended October 30 — encompassed 733 drug-related investigations in the Kunming municipal area alone. More than 600 suspects were arrested over the course of the campaign and police confiscated a reported 406 kilograms of illegal drugs.

Provincial officials have been wrestling with the issue of drug trafficking for years but it appears the situation is becoming worse rather than better. An article published recently in People's Daily summarized the situation currently facing the province:

Despite shared cross-border drug intelligence and accompanying large-scale busts, reports have yet to mention cartel leaders by name. Those arrested have largely been low-level couriers, which may indicate Yunnan and its neighbors have uncovered the symptom of a greater problem but have been unable to effectively identify and combat the source.

I once watched a short film about some Chinese women who were convicted of trafficking drugs into China. On their last evening in this world, they had a nice dinner, did their nails and prepared their favorite clothes. Next morning, they entered the execution grounds. It was heart-wrenching to watch the film. Drug couriers, sometimes also called drug mules, who bring drugs across international borders almost always are doing it for money or because they are being threatened, and they usually do not understand the laws and penalties. They are simply pawns used by drug lords and corrupt officials on both sides of the border. So I believe that these drug mules should be viewed as criminals per se, but as a modern kind of slave. Their cases should be considered under the category of 'human trafficking' crimes.

I meant to say:

So I believe that these drug mules should NOT be viewed as criminals per se...

I wish journalists would stop using the category 'drugs', or even 'illegal drugs', as if it explained what the substances are and what they do (are we talking about weed or smack? or perhaps whiskey, in some countries?) - it instills a very ambiguous category into the human brain, so that it can't think clearly (ie., similar to many 'drugs' which have the advantage of wearing off after awhile, besides the fact that the 'drug' user KNOWS that he's inflicted weirdness upon himself). And at any rate, there's no excuse for the state in which we live to go about executing people, China has plenty of prisons, and my thought would be to decrease the number of killings, intentional or otherwise, not increase them.

Can we get any more specifics? Xishuangbanna and Lincang are huge prefectures which multiple border crossings each. Exactly where were these drugs apprehended? Any info on the alleged source of these drugs? Are they coming from the Wa State? I was under the impression that Myanmar's role in global heroin/opium producing had dropped to nearly zero ever since the US military paved the way for the boom in Afghan heroin. Does this signal a reversal of that trend?