Around Town: Tanhua Temple and park 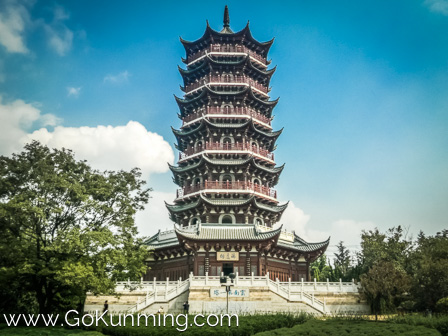 Nearly three hundred and fifty years ago a man named Shi Juqiao (施巨桥) lived in a small cottage in the hills east of Kunming. He was a scholar and inveterate gardener who specialized in growing magnolias imported from India. One of these trees was said to be particularly magnificent — perhaps the most beautiful in the province.

Years after Shi's death the tree and his house still stood. His grandson donated the land to a nearby temple whose abbot took over the gardening responsibilities and turned the newly-acquired land into a mountainside park.

This is the traditional account of how Kunming's Tanhua Temple Park (昙华寺公园) came into existence. The magnolia tree is by now long gone. In its place stands a seven-story pagoda that commands panoramic views of the surrounding park as well as the rising Spring City skyline to the west. 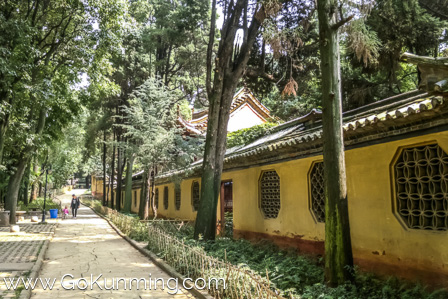 Today the temple, which has been destroyed and rebuilt multiple times, is largely overshadowed by the park and pagoda. Visitors still come to burn incense and gaze at a small grotto containing a statue of Buddha, but the temple's collection of relics and ancient sutras was destroyed during the chaos of the Cultural Revolution. Today the main attraction are the temple grounds themselves.

Located just inside the complex's red stucco walls lie several small pavilions ringed by gardens. One of these is full of hanging flowers and multi-colored peonies that lend a sweet aroma to the air. 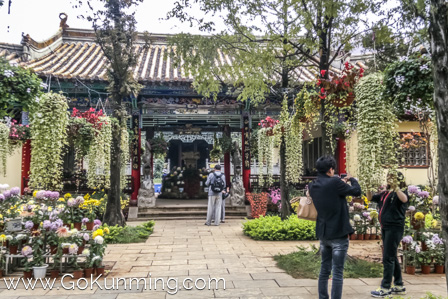 Further on are larger gardens, many of them containing ponds and ornamental rocks, and watched over by the statues of former temple abbots. These areas are, for the most part, quiet and peaceful. Visitors stroll along stone paths through the lush greenery speaking in hushed voices.

That sense of calm disappears quite quickly upon reaching the larger of two teahouses located inside the temple. A spacious courtyard was filled almost to capacity with elderly people animatedly involved in all sorts of activities. On the day we visited the majority of people were engrossed in some apparently controversial games of majiang. 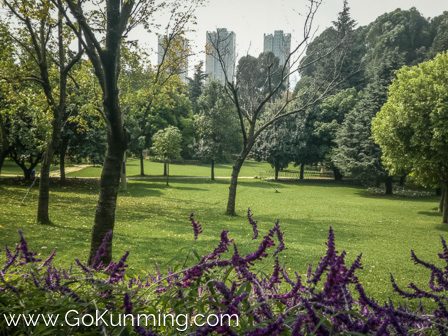 Paths leading away from the teahouse eventually find their way to a stylized cave that passes under a road. This is one of the entrances to the park apocryphally donated to Tanhua Temple.

Built on the gentle slopes of the Jinma (金马) mountain range, the park grounds are more open and manicured than those inside the shady and overgrown temple. Wide and winding cobblestone boulevards lead uphill through meadows, stands of huge trees and collections of potted plants. 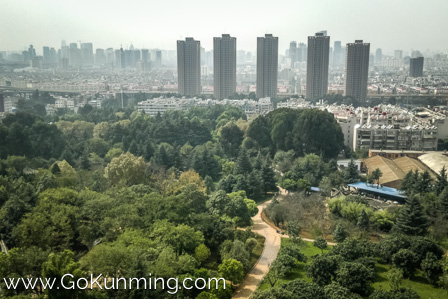 Unlike the unfenced lawns of Xihua Park, the sprawling grassy areas in Tanhua are closed off and inaccessible. This can make enjoying the shade from some of the enormous trees a bit difficult.

Nonetheless, the park still offers plenty of space for a relaxing wander. While the teahouse lower down in the temple is often abuzz with crowds, the park is large enough to accommodate numerous visitors without feeling crowded. 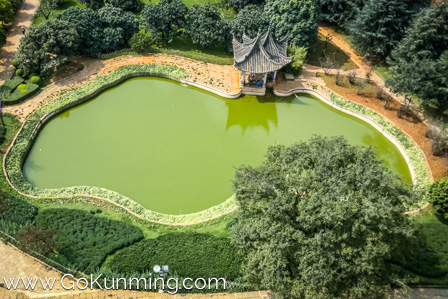 The easternmost section of the park is dominated by the 48-meter tall Ruiying Pagoda (瑞应塔). Opened to the public in 1996, the tower has seven octagonal balconies that, on a clear day, provide fantastic views of the city. During our visit Kunming was having a bad day and the smog hid both the Western Hills and Changchong Mountain.

Despite our limited visibility from the pagoda, it was enjoyable to stare down at the peaceful park and one of the greenest lakes imaginable. Old men flying kites to ridiculous heights waved up at us and all we could hear was the wind. 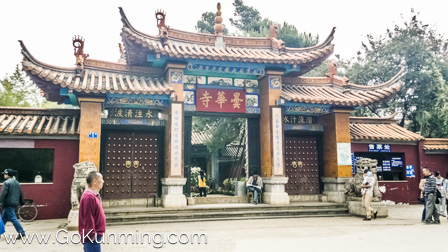 Tanhua Temple is roughly four kilometers east of the city center. It can be reached by hopping a bus to the Wangdaqiao (王大桥) bus stop which is located near where Renmin Dong Lu intersects the Second Ring Road. The stop is serviced by the 29, 50, 54, 77, 132, 158, 237 and K9 routes. From there walk straight north up Tanhua Lu (昙花路) until you see the temple entrance. Admission costs five yuan and the temple and park are both open daily from 9am to 4pm.

Glad to hear the Ruiying Pagoda is open again. It was closed and locked when I visited earlier this year. It's a great little park and nice article.

Its a while since stepped there, but there should be plenty of old stone tablets with old Yunnan poetry/calligraphy there. A calligrapher that came across, said there are tablets with the finest local calligraphy. (?)

As soon as the poetry nights start reading old poems by Yunnan legend Yang Seng, or any kind of Yunnan landscape poetry, there may just be some real spirit around, - instead of modern subjective Western trivialities.