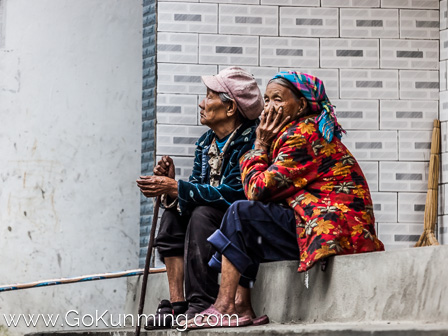 China this weekend celebrated Double Ninth Festival (重阳节) — commemorated on the ninth day of the ninth lunar month. Since 1989 this date has also been observed as Senior's Day. Officials in Yunnan marked the festival by visiting some of the estimated 1,200 centenarians living in the province, including 103 year-old Kunming resident Yuan Siqi (袁思齐).

Festivities however were not limited to photo opportunities and chances to spread good will for politicians. To mark Senior's Day, the Yunnan government released an update detailing what is being done to address the serious challenge of how best to assist its fast-growing population of retirees.

At this time in 2012 provincial officials announced one billion yuan had been earmarked for spending on senior care and the construction of retirement communities. Over the past year, much of that money has reportedly been used to build 360 "community service senior centers" across Yunnan.

The facilities have been specifically established to assist impoverished seniors or those without families to take care of them. Currently these nursing homes contain 61,000 beds, with plans calling for an additional 120,000 to be added over the next two years.

Also slated for completion later this year are 184 community care centers which will offer access to basic healthcare services. Five hundred community outreach bureaus furnishing in-home care are also expected to go into operation in the near future. Such services and facilities are deemed necessary by the government as Yunnan deals with a growing number of sieryi jiating (四二一家庭) — families with four grandparents and two parents who may have to rely on support from only one child during their old age.

Roughly one third of the billion yuan fund was used to establish a new pension system offering small monthly stipends for people over 80 years of age. Yunnan has a somewhat astonishing 660,000 people in this demographic group, and each of them are eligible to receive 40 yuan per month from the government. People who have passed the 100-year threshold are given 250 yuan per month as well as a one-time "longevity payment" of 2,000 yuan.

China is attempting to cope with the rapid graying of its population. The country had 175 million people over the age of sixty according to the 2010 census. That number is expected to double in the next 25 years. If those calculations prove correct, Yunnan would be home to 10 million retirees — one sixth of its expected population in 2035.

Seniors over 80 are entitled to 40RMB a month from the gvt.

Wow! A weekly bowl of noodles...

there's always money for banquets, though.

So true, so true.

In which country does the government pay enough money for the retired to continue their quality of life? Other than some oil states, probably none. Most people rely on their own savings plus whatever scraps their state pension allows them. It's usually wildly insufficient, and inflation happens all the time and everywhere.

Needs are lower, too: where young people need a lot of money to buy a house, the elderly mostly already own a dwelling.

Also, 40 RMB may not sound as much, but when I cook for myself, 40 RMB lasts me an entire week. People that are craftier with their money, need less food, have better haggling skills and know where to get produce cheaper, may well last over two weeks. And then they usually still have their grandchildren and savings to rely on.

September 17, 2021 "I have been specializing in teaching The TOEFL Exam for over 10 years, and I can help you Achieve Excellence On The TOEFL Exam. Only for serious st …"
Living in Kunming tigertigerathome