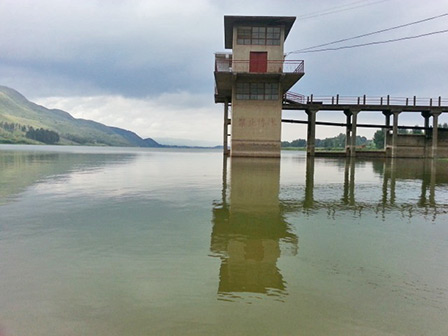 A reservoir outside of Songming on September 2

Over the course of Yunnan's ongoing drought official announcements regarding water supplies have varied wildly. This year appears to be a little different, and tinged with caution. Although reservoir levels are creeping toward average historical levels, a report released by the Kunming Water Authority (KWA) has labeled water storage inadequate, describing conditions as "still not optimistic".

While not particularly uplifting, a proclamation such as this is more encouraging than previous reports that have repeatedly characterized the situation as "grim". Yunlong reservoir (云龙水库), which supplies Kunming with roughly 70 percent of its water, has tripled its water reserves over the course of this year's rainy season. Qingshuihai (清水海) and Songhuaba (松化坝) reservoirs provide the majority of the city's remaining 30 percent and are also recording high water levels.

The seven reservoirs that supply water for the Kunming municipal area contain a combined 30 million cubic meters more water than they did at the same time last year. Officials are now estimating this amount can meet current city demands until March 2014 without any further precipitation.

Rising reservoir levels are of course credited to a fairly wet rainy season. However, authorities have said limiting water pressure to some areas of the city, coupled with community conservation campaigns, have also proved effective. Rationing has become something of an annual event in the Spring City, and this year began more than six months ago on February 28. Water pressure has now been returned to normal across the city, according to KWA.

The drought, which has been ongoing for more than four years, has caused hundreds of millions of yuan in damage to agriculture and industry. Harm has not always been directly linked to a lack of water. Areas of the province have repeatedly been hit with flash flooding and landslides caused when the ground has become too dry and packed to effectively absorb rain.

The drought has also led environmental groups and government officials to consider a series of radical initiatives aimed at limiting the severity of another water crisis. These have included the discussion of massive reforestation projects, an 800-kilometer river diversion scheme and the current construction of thousands of small, village-level cisterns.

Half full or half empty...

If you've got a bathtub under your shower you can save the shower water to flush the toilet.

...here we go again. After the last 3 months WITH running water, our neighbourhood once again had it cut off this morning - no warning, no explanation. After the previous 1.5 years of "one hour of water a day", we were thankfully somewhat prepared (we kept our buckets filled). But surely these "lowering of pressure" and "total cuts" could be warned about? My wife is Chinese and keeps her eyes open, but the cuts seem almost random, and certainly not pre-planned. Grrr...

After having little or no pressure for many months, our pressure is good again. Ocean & Philou if you check you might find they are making some kind of a street or water main repair in your neighborhood.

At my previous community, they put up a notice at the wuguan, but with no specific dates. A few days before I left, they cut off the water to connect pipes to the new half of houses. According to my previous landlady, the cut went on for two weeks.

A tiny sign has belatedly gone up here, saying it's "because of the subway" and should last 4 days. Fingers (dirty ones), firmly crossed.