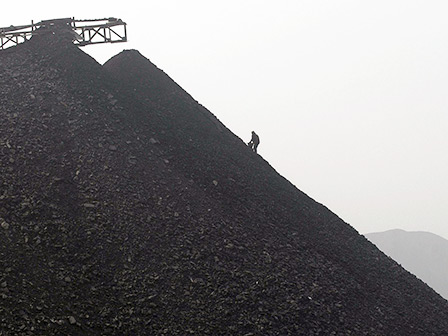 The hits, and the debt, keep coming for China. Less than a decade ago the country was suffering from a shortage of coal. Today that situation has reversed itself entirely as China's incessant drive for more mining has led to an enormous oversupply.

A report released by China National Coal Association (CNCA) states the country is sitting on 200 million metric tons of coal reserves and could see that amount double by year's end. The glut has caused prices for the fuel to drop 50 percent in China when compared to the same period last year. As a result, nearly one-third of China's large-scale coal conglomerates are now operating at a loss.

In some places there are no companies currently making a profit. Over the weekend, CNCA vice-chairman Jiang Zhimin, announced "...all the enterprises in the provinces and municipalities of Heilongjiang, Jilin, Yunnan, Chongqing, Anhui and Jiangxi are experiencing losses." Exacerbating the situation is that coal purchasing companies have combined outstanding debts totaling 320 billion yuan (US$52.2 billion).

Overcapacity is the result of more than half a decade of relentless financing of coal mining activities across the country. By 2010 China had invested a reported 1.2 trillion yuan (US$196 billion) in its coal industry, representing growth of 600 percent over the previous five-year period. 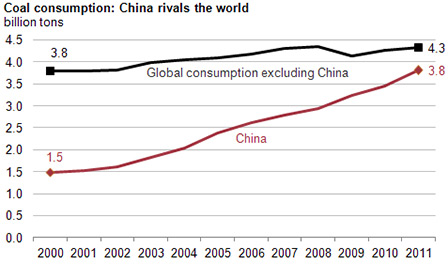 In places such as southwest China's Yunnan province, increased coal production had been a major factor in the local economy repeatedly outpacing the national average. Last year Yunnan, which holds the eighth largest reserves in the country, saw raw coal production surpass 100 million metric tons for the first time. A prolonged drop in prices due to a period of oversupply could have severe impacts on regions in the country's west where economies are not as diversified as those on the coast.

The architects of China's energy policy are attempting to streamline mining and coal-fired energy generation plants. Illegal and small-scale coal extraction operations are being shuttered or incorporated into larger firms. Those using equipment deemed outdated are being forced to upgrade or face forced closure.

While coal remained profitable, it was perhaps easier for policy-makers to ignore the mounting side effects of its use — including massive water use and severe air pollution. Coal extraction consumes an estimated 17 percent of the country's water at a time when some rivers are running dry.

Air pollution in China's northeast became so pronounced last winter that it surpassed existing measurement standards. In response to growing public concern, Beijing announced a US$300 billion project aimed at reducing coal-based emissions by 25 percent over the next decade.

200 million tonnes! What I want to know is - how much do they lose each year in run off from rain/wind? You can bet that their are hundreds of massive piles of coal like in the first picture, just imagine the damage to the local ecosystems/ground water after a rain storm! And we wonder why we have heavy metals in our water supply!

21st century. Still burning rocks we dig up for electricity. Wait till they burn that coal, then the mercury goes airborne.