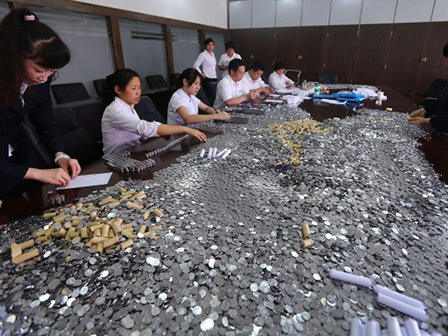 An unidentified noodle shop owner ordered by a Kunming court to pay restitution in an assault case apparently has taken umbrage with the fine and this weekend paid a large portion of it in coins. Staff at a Wuhua District branch of Industrial and Commercial Bank of China (ICBC) bank spent an entire day attempting to count the coins, Yahoo is reporting.

The fine was assessed following a September 2012 beating in which a couple surnamed Wu were assaulted by workers at a Spring City noodle shop. The two were apparently attacked after complaining their bowls were dirty. In the altercation Ms Wu suffered a brain contusion while her husband sustained three broken ribs.

A court ordered the noodle shop owner to pay the couple 68,000 yuan in compensation. Portions of that money had been paid through the business owner's lawyer in cash. However, on August 9, the Wus were summoned to the bank to receive another payment but watched in astonishment as eight huge bags of coins were set in front of them. The reported amount contained within the bags was 10,000 yuan (US$1,634), entirely in jiao (角).

After visiting several banks throughout the city, all of which refused to count the money, the Wus finally found one where staff were willing to exchange their coins for paper notes. Eighteen tellers at ICBC spent an entire work day counting and sorting the change into paper wrappers. At the end of the day they had made it half way through the stack of coins.

This story raises two intriguing questions not answered in online reports. Namely, where did the noodle shop owner come up with 100,000 one jiao coins and why do Kunming banks not possess automated change counting machines?

Perhaps unsurprisingly, this episode is not without precedent. Five years ago in Jiangsu province a man was paid 68,000 yuan (US$11,000) for work related compensation in coins weighing nearly 400 kilograms.

The incident in Kunming is another in a long line of bizarre news stories of people behaving badly in Yunnan over the past few years. In addition to numerous cases of blatant disregard for food safety standards, a government official was recently sent to prison for assaulting an airport kiosk. Perhaps more infamously, in 2011 a frustrated commuter drove his car over a busy pedestrian bridge to escape a traffic jam.

Haha! What assault case, though?

And it's not even April 1st! Love it!

Assuming this story is real...
I think if you dish out brain contusions and broken ribs rather than noodles in clean bowls, you should be severely punished. At least 6 months jail for everyone involved in the beating, plus the 68k to pay the medical bills and loss of earnings for the beatees. Or if the victim prefers, they could have 12 free hits at each of the perps.