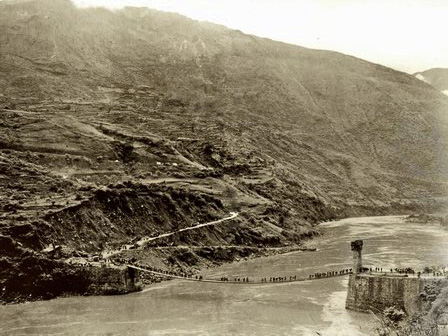 The Huitong Bridge in 1944 with the eastern bridge tower still missing. Only limited traffic could pass as the bridge was shelled from Songshan Mountain during its reconstruction.

Now, in a changed Chinese political climate, more attention is being paid to the Guomindang period. This is especially true since the airing of the TV-series West Yunnan in 1944 (滇西1944). The show was serialized from a book and depicts the battle of Songshan (松山) and the activities of the Chinese Expeditionary Force. 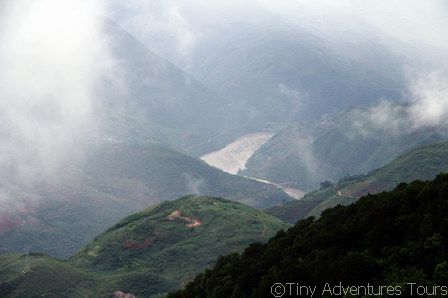 The Nu River seen from the top of Songshan Mountain. The Huitong Bridge is just barely visable from this 1,300-meter vantage point.

A piece of history

During World War II the western part of Yunnan was occupied by Japanese forces. They had effectively cut off the Burma Road that had supplied China from Burma and were attempting to stop cargo planes flying The Hump transport route.

The Japanese army could only be stopped from further penetration by blowing up the Burma Road bridge at Huitong (惠通桥), where it crossed the Nu River — then known to the world outside China by its Burmese name, the Salween. General "Vinegar Joe" Stilwell, the allied commander in the China-Burma-India Theater, worked hard to reopen the Burma Road because he saw it as the only way of getting in enough supplies and heavy equipment to fight the war further east in China.

Under his command, American engineering battalions started to cut a road through the north of Burma from the Indian railhead town of Ledo to link up with the original Burma Road at the Chinese border. To recapture the ground through which the supply line had to go Stilwell launched the Salween Campaign using the Chinese Expeditionary Army that was set up and trained in India. 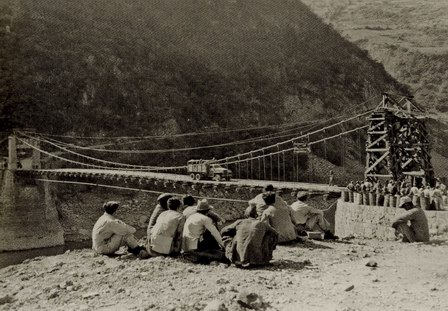 The reconstructed Huitong Bridge 1945 with an improvised eastern bridge tower. Note the fuel pipeline hanging under the bridge.

This force was made up of army units cut off by the Japanese attack on the Burma Road as well as Chinese soldiers flown in on empty Hump return flights to India. These men were known as the X-Force while the American-trained and supplied Y-Force operated from Yunnan.

The Y-Force, with the assistance of American supplies, technicians and tactical operations advisers, forded the Nu River beginning on May 11, 1944. On the first day some 40,000 troops crossed the river with the help of 398 American rubber boats and countless bamboo rafts. In the days that followed, 60,000 more troops and thousands of pack animals carrying supplies crossed the river. 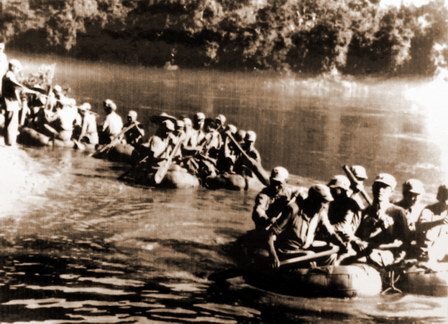 The Y-Force crossing the Nujiang in American-supplied inflatable rafts.

The Japanese had not expected that an army could cross the rain-swollen river and were taken by surprise. However, they could hold up this enormous force because they were well dug-in and retained control of the passes in the Gaoligong Mountains.

The Japanese base on Songshan controlled the Burma Road and the Huitong Bridge across the Nu River. The stronghold — referred to as "Gibraltar on the Burma Road" — proved extremely hard to capture. 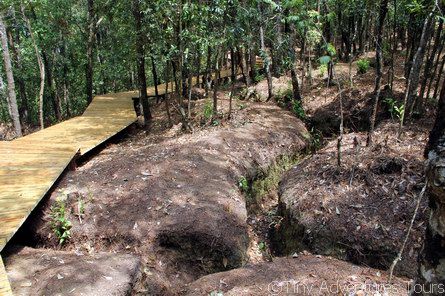 Japanese trenches are still visible on the mountain and are now protected by wooden walkways.

First the Chinese tried to storm it but were kicked back again and again, each time with heavy losses. Then the Chinese started to construct First World War-style trenches up the mountain, but in the end this did not work either. Finally they undermined the command and supply bunkers by digging long tunnels though the mountain. Using three tons of US-supplied TNT, the force blew up the mountaintop on August 20, 1944.

Even then there was still stiff resistance and the mountain was only captured on September 7, following more than three months of heavy fighting. The victory was secured at a cost of 7,600 Chinese soldiers and some 3,000 Japanese defenders.

On January 12, 1945 the first convoy left India and followed the recently captured road. It arrived on February 4 in Kunming over a road that was by then officially named the Stilwell Road — one that combined the original Burma Road and the American-constructed Ledo Road.

The Guomindang erected a monument on Songshan to commemorate the battle, but the monument was later demolished by Red Guards during the Cultural Revolution. Stone slabs taken from the rubble of the monument were reused to pave the floor of a local school. In 2004 some of the stones were recycled a second time and used to erect the monument again. 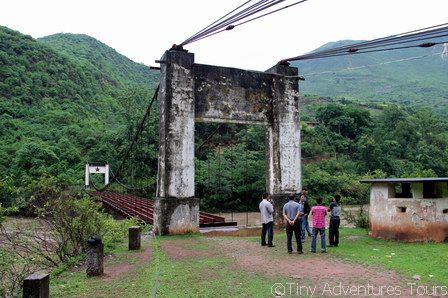 The reconstructed Huitong Bridge is now preserved as a monument. The present form dates from 1950 and carries the communist star on the rebuilt eastern bridgehead.

The Songshan battlefield and the Huitong Bridge are on a part of the Burma Road that is no longer actively used and this remoteness gives them a special charm. When visiting, the seclusion enables one to reflect on how things once were. You can sit down and imagine an army of 100,000 men and thousands of pack animals coming across the river on bamboo rafts and inflatable rubber boats.

The old Burma Road in this area is a good location for cycling with opportunities for interesting climbs and hikes. From the river up to Songshan's summit is a climb of 1,346 metres, mostly accomplished over cobblestone roads. 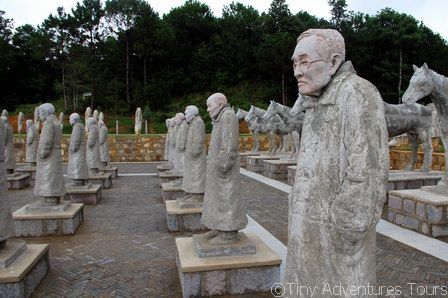 A completed part of the Songshan monument. There are 84 soldiers still alive today who fought in the battle and they are depicted in their present-day appearances.

The Longling County (龙陵县) administration is at present upgrading the Songshan area. Wooden walkways have been constructed for touring the battlefield on the top of the mountain. Remarkably, many of the original trenches are still visible and the new walkways should protect them further. Pine trees cover the mountain again — fitting, as Songshan literally means "pine tree mountain" in Chinese.

An official museum is in the planning stages and a new monument is currently under construction. The new monument looks to be inspired by the Terracotta Warriors in Xi'an. The replica army is made out of concrete and instead of chariots there are two American Jeeps. Songshan was the first place in China where Jeeps were used during the war.

Like their terracotta predecessors every statue at Songshan will get an individual face and scattered among the Chinese soldiers are the visages of some of their American advisors. The new monument is planned to be inaugurated on September 3 of this year. 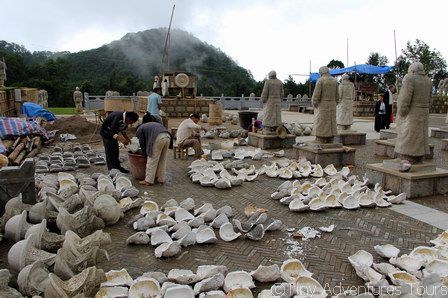 There are several daily direct buses from both Kunming and Dali to Baoshan. In Kunming they leave from the West Bus Station and tickets for the seven-hour trip should cost between 175 and 230 yuan.

From Baoshan to the Huitong Bridge it is a further 80-odd kilometers, for which buses are also available. For those interested in cycling, directions can be found on the Tiny Adventures Tours blog. 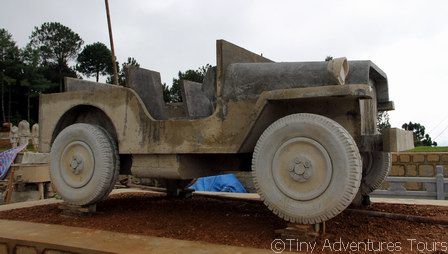 A concrete Jeep being built for the memorial
© Copyright 2005-2021 GoKunming.com all rights reserved. This material may not be republished, rewritten or redistributed without permission.

Great to see articles about this part of Yunnan.

The specific bus route the author mentions from Baoshan which passes the bridge is the bus from Baoshan to Nansan (南伞), a county town in Lincang Prefecture on the border with Myanmar, itself a pretty interesting place. There may be others, but this is the only one I know about. The bus makes a ten minutes bathroom stop just before crossing the bridge.
It doesn't actually take the old Huitong bridge, but rather a newer bridge some 500 meters downstream. There's unfortunately not really enough time to see the old bridge during the restroom stop, and there's only one bus a day from Baoshan to Nansan, so you can't catch the next bus without spending the night, and that's difficult because ther'es no hotel there, just some run-down shacks selling tamarind and mangoes.

It's possible there are other buses that ply this route, but I can't confirm that. There's really not a lot along this route other than the Nujiang River. Very few settlements of any kind. Beautiful though!

I toured this area with Lieuwe Montsma, who wrote the article. I've traveled a lot, and I've never joined a tour, but I'm glad I joined his. He's an excellent guide. He knows the area extremely well, and he can find his way anywhere in it. Check out Tiny Adventures Tours online, if you want the best tour you can get in Yunnan.

The new monument has been inaugurated and all statues have their heads on now.

The Wikipedia article on this appears under the title "Battle of Mount Song," and indeed searching Wikipedia for Songshan gets you nowhere at present.

The article also makes much of the Japanese force digging into the mountain: "Constructing a series of tunnels and bunkers over a static two-year period they turned the mountain and its immediate environs into a fortress." And: "The Chinese forces were unaware of the depth of the Japanese defences, and their underestimation led to heavy casualties through a slow and cautious campaign. Chinese artillery strikes and US bombing runs had little effect against Japanese forces underground. Japan also set up a series of hidden pillboxes to ambush the Chinese forces."

The Japanese listed only 1 survivor, plus two runners sent to inform the high command, but the Chinese claimed 7 prisoners taken.

The Wiki article, strangely, does not (yet) mention the bridge.