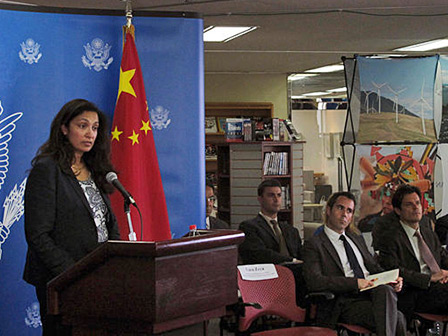 Last week representatives from China and the United States met to discuss what has long been one of the more sensitive issues between the two countries — human rights. The eighteenth US-China Human Rights Dialogue was held this year in Kunming, capital of southwest China's Yunnan province.

Delegations were headed by Chinese Department of International Organizations and Conferences Director-General Li Junhua (李军华) and Acting Assistant Secretary for Democracy, Human Rights and Labor Uzra Zeya. The two parties met July 30-31 to discuss a host of issues and "...to have candid and in-depth exchanges on the basis of equality and mutual respect", according to China Daily.

In the past, talks such as these have sometimes devolved into an accusatory tit-for-tat between the two countries despite the seriousness of the issues. This year appeared little different, as each side used the dialogue to air by now familiar grievances about the other.

At last week's meeting, the US stressed the importance of freedom of religion and expression, as well as the rights of China's ethnic minorities. For its part, the Chinese delegation emphasized that China has improved the lives of millions of its citizens by raising them out of poverty and is committed to the rule of law.

Li brought up a litany of problems China sees in the US. These included gun violence, racial discrimination, the use of aerial drones in countries such as Afghanistan, Pakistan and Yemen and the treatment of prisoners held at the Guantanamo Bay prison facility in Cuba.

Following their closed-door discussions, representatives were taken on private tours. These included a visit to a women's prison near the Stone Forest, as well as stops at Kunming's Yuantong Temple and a local mosque. The US delegation flew to Beijing following the dialogue, where they were expected to hold meetings at the State Bureau of Religious Affairs, among others.

If anything was accomplished during the two days of talks in Kunming is difficult to say. Media portrayals from the two countries vary wildly. China's official press agency, Xinhua, characterized the discussions as "comprehensive and constructive". Using a decidedly different tone, Zeya said at a news conference regarding the talks, "overall [they] fell short of our expectations".

The US would do well to get ie else whts own house in order, before telling everyone else what to do.

The picture attached to this article does well in capturing the exceptionally smug demeanor of U.S. human rights bureaucrats.

America the BIGGEST hypocrite of the world. Do as I say NOT what I do! Moving along nothing to see here!

This is called a "dialogue", that is, a voluntary 2 way discussion amongst equals. In this case it looks like America brought up specific issues of concern regarding China, and China did likewise re America. If two countries, each with a less than stellar human rights record, enter into such a process does that make them both hypocrites, and therefore they would be better to not enter into it at all?
Should only countries with perfect human right records be allowed to discuss other countries human rights situation? Who would be talking in that case?

Well said Chingis. The US has problems, that is not the argument here (or at least it shouldn't be), but rather the attempt by two world powers to address an issue that is quite serious. I applaud both sides for coming to the table consistently to talk about the Human Rights issue. However, there needs to be an actual dialogue and then steps should be taken by both sides to fix the problems address. Just coming together and pointing fingers at the other's problems will not solve anything. The US has made, and continues to make mistakes. The same can be said for China. Everyone knows what needs to happen, I feel as if I'm preaching to the choir. At least it is being address in some way. Hopefully this will lead to actual reform.

"Should only countries with perfect human right records be allowed to discuss other countries human rights situation?"

No, but only countries that look like they're trying. U.S. fails in that regard. Other countries, e.g. Switzerland and Denmark have the requisite integrity to engage in dialogue.

Right, so Switzerland and Denmark should discuss it amongst themselves, since obviously China wouldn't be in a position to be involved...

I think what these governments are most interested in is not human rights, but how not to be accused of violating them.