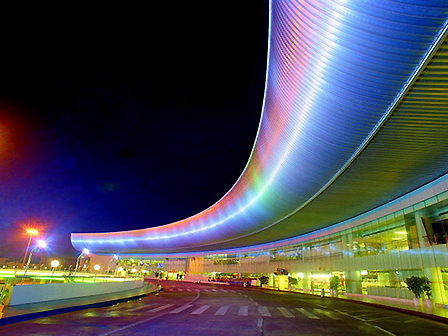 In a city pockmarked with dozens if not hundreds of gigantic buildings sites, announcements of new construction have become non-events. That is of course unless the proposed project comprises a significant chunk of the city.

Such was the case on July 5 when city planners announced a new financial district coupled with an urban renewal project that will encompass ten square kilometers of land where Kunming's defunct Wujiaba Airport now stands.

The multi-year project will be overseen by Shanghai Tongji, a design conglomerate that has been pitching redevelopment bids to the Kunming government for more than a year. The company has not officially released blueprints or cost estimates.

Wujiaba has been used sparingly since Kunming Changshui International Airport opened last June. The old airport has since hosted the Tiger Beer Battle of the Bands as well as an exotic car rally but has otherwise sat empty.

The plans include preserving and upgrading existing green space as well as the airport's two runways. Ponds, waterways and park areas comprising 210,000 square meters are also slated for construction.

Over the past few years Kunming planners have overseen the move of many of the city's higher education centers and governmental offices south to Chenggong. The refurbishing of Wujiaba Airport appears to be a similar move.

A press release characterized the project as a "new center of finance and economics" for Kunming. When finished it could provide the Spring City with a dedicated financial district to complement its growing importance as an economic hub connecting China and South Asia.

They should start with the basics and put an information desk in there somewhere. This must be the only international airport, where theres no information desk; and hey, its China afterall. Even domestic airports have information desk, now what is this.

Now, what makes this all even more intriguing is that you basically do not know, whether the person who arrives, will come out of Exit A or Exit B. Theres no information, and nowhere to ask about this. Yea, even Exit C is a possibility, unless you know where the immigration took place.

People are extremely confused over the bad information there, and whoever designed the basics there cannot have been the brightest star in the sky. No wonder the official recently smashed the machines there.

I think the airport mentioned here will be for heliport and small private planes of the corporate variety.
This may be linked up to the plans for the area east of Dianchi Lu and north of Guangfu Lu that was previously earmarked for new financial district.

BUT at least Shanghai Tongji know what they are doing. It just depends on whether the local gumint will listen to their advice.