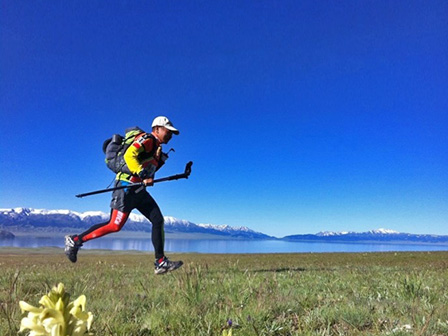 China's premier outdoorsman was at it again last week, this time running a 250-kilometer race across the Gobi Desert. Jin Feibao (金飞豹) and his team, the Kungfu Pandas, finished third in the group category after seven grueling days.

Jin was participating in the Gobi March, a race through northwestern China's Xinjiang province held annually for the past decade. Race regulations require participants to carry everything they will need each day on their person, including food, water, clothing and sleeping bags. 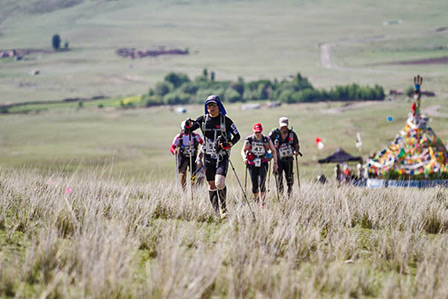 This year the race was spread over seven days. The first four stages were 40-kilometers long. The fifth stage, referred to as 'The Long March', was 80 kilometers. Competitors ran through desert and grassland, cresting hills and crossing river valleys near where traders used to travel on the Silk Road.

Although far off the time of winner Stefano Gregoretti — 27 hours, 9 minutes — Jin and the Kungfu Pandas managed to finish third in the team category. Everyone on the team finished with an identical time of 58 hours, 40 minutes.

During the race's first stage runners ran in the shadows of the Altai Mountains and had to cope with wildly vacillating temperatures and an elevation gain of 800 meters. Day two was punctuated with stiff winds and rain that one runner said "felt like nails." The next day the course climbed slowly through alpine forest. 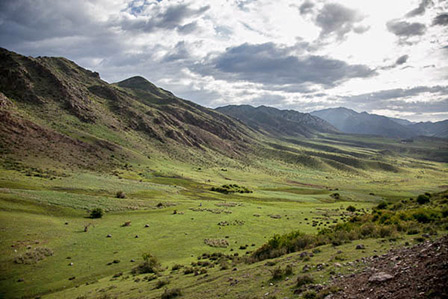 Stage four took place under perfect conditions. Jin said of the day's run, "Today is really awesome. If we can make it through today, we will be good. If you don't finish, you won't know how great you are."

The Long March portion of the race crossed through a pass in the Tianshan Mountains. In addition to covering 80 kilometers, runners had to tackle an elevation gain of 1,560 meters. Jin and his crew completed the day in a mind-numbing 17 hours. Luckily, on the final day racers only needed to run ten kilometers. 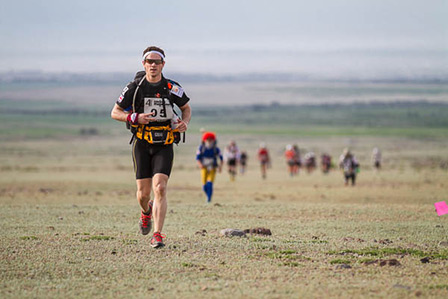 The event was organized by 4 Deserts, which holds annual footraces across the Sahara Desert in Africa, the Atacama Desert in South America and the Gobi Desert. People who finish at least two of these competitions automatically qualify for a 250-kilometer race in Antarctica.

Jin Feibao is never lacking for things to do. He has previously summited the highest peaks on every continent, been to both poles and crossed both the Sahara Desert and Greenland on foot. This summer he plans to retrace one of the seven ocean voyages made by China's greatest maritime explorer, Zheng He (郑和). 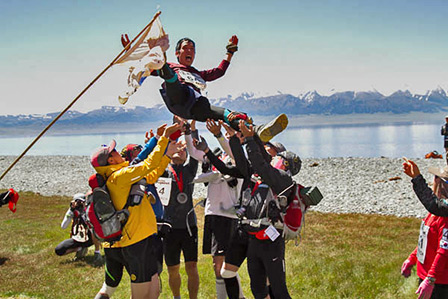 One of Zheng He's 7 Voyages? Wonder if they will have a 300-meter long treasure-ship (Junk) built for the great exploration & tribute trip in Nanjing? Most researchers of this period, believe that after Zheng He passed away, some captains took a few of these vessels on a full circumnavigation. Artifacts left in the Azores, the Med. and an old, but accurate sketch of a Caribbean island on a map, as well as places along the E. coast of South America, indicate they may have crossed the Atlantic; visited the "New World" along both continents, then rounded Cape Horn and proceeded up the Pacific side. There is even evidence on a mountain slope in New Zeeland of a possible Treasure Fleet ship of immense size that was driven there by a Tsunami. As I recall the year of the first voyage was 1421 and there is a book by that name from a UK author, as well as a follow up about visits to Italy, and islands in the Med. I hope some day the Zheng He park in Xilin will feature this additional information, but for now it is a nice day-trip from Kunming - a good place to start an adventure, since as a boy, Zheng He learned to sail on then beautiful Lake Dianchi.