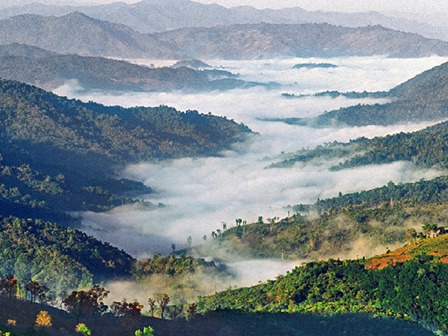 A cloud-shrouded valley in Pu'er

Five cultural relics in Pu'er were recently listed as Major Historical and Cultural Sites and will be protected at the national level. This is the highest designation for preservation under the PRC's Ministry of Culture and a necessary step in the process towards attaining UNESCO World Heritage recognition.

Of the five sites the Jingmai Ancient Tea Gardens (静脉古茶园) in Lancang Lahu Autonomous County (沧拉祜族自治县) have the most realistic chance to receive UNESCO designation, China Daily is reporting. Whether any of these sites will be developed on the same model as Lijiang or the Three Parallel Rivers Protected Areas, remains to be seen.

The largest contiguous area to be protected are the Jingmai Ancient Tea Gardens, which boast over one million tea trees classified as "ancient". Some of the trees bearing this classification are one or two millenia old, while others are only a few hundred years old.

The area received preservation status not only because of its trees, but also because of the people living among them. There are four distinct ethnic cultures cultivating tea in the region — the Bulang, Dai, Hani and Wa. Nicknamed "natural tea museum" (天然茶叶博物馆), local farmers have managed to harvest tea without seriously disturbing the local ecosystem for over 1,800 years. 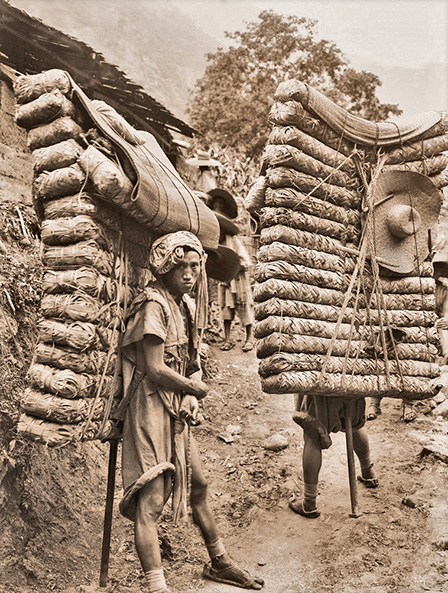 The Ancient Tea Horse Road, also known as the Southern Silk Road, got its name from the pu'er tea for Tibetan pony trade that took place high up in the Himalayas. The road was in continuous use for at least 1,300 years and would eventually provide a supply route for the Chinese Nationalists and supporting Allies during World War II.

After 1949, free trade was restricted and the ancient footpaths were largely abandoned in favor of paved roads. Although parts of the old road criss-crossing Yunnan can be difficult to find, the sections in Pu'er are relatively accessible.

Other places recently granted this status include a Confucius Temple in Jingdong (景东), the Nuofu Church in Lancang County (澜沧), and a Buddhist Temple Complex in Jinggu (景谷). These three places of worship range from 100 to 400 years-old, and exhibit Confucian, American Baptist, and Dai influences respectively.

Such recognition by the Ministry of Culture guarantees certain protections to these five sites. The safeguards include bans on demolition and prohibitions against moving buildings. Because the Jingmai Ancient Tea Gardens are now on the UNESCO Tentative List, they can additionally apply for conservation and management stipends of up to US$50,000.

Its the infamous tea road from Ya'an to Kangding, on which the barefooted porters carried the tea on their backs, and had a pole for support. Yunnan had mainly tea caravans with horses or mules. There are curious old pictures of Tibetans in fur clothing and with mastiffs sweating in the Simao tropics, buying tea. There were of course barefooted porters in Yunnan too, but its mainly asspciated with salt, not so much the Yunnan tea road (or say, a yunnan trade route in general). The photo is from the Sichuan tea road. Anyway, its no big deal. It fills up fine.

According to Emile Rocher, 1870s, Yunnan backpackers mostly carried objects to fragile for mule-back, such as porcelain tea-pots, or in Rocher's case, copper percussion caps for the rifled muskets he was delivering to the Imperial army in Kunming.

Yea, very true. Similar foreign observation was done a few years later by Morrison (the Australian, Times reporter). Then there were indeed some independent coolies, but none carried tea as was done in Sichuan (like on the photo above), with poles and barefoot/grass-root shoes. These independent coolies carried various stuff, and among these, salt was one. There were, of course, also caravans doing salt.

i'd like to point out two mistakes on paragraph two. Maybe they were type mistakes,but better correct them. The chinese should be "景迈古茶园" and "澜沧拉祜族自治县".

I have no direct proof of a relationship, but it seems that these moves may be a direct or partial result of a recent French-Chinese diplomatic-level economic collaboration to promote French wines in China and Chinese tea in France. Basically, the Chinese government wants to support the wider promotion of expensive teas in a manner similar to high end wines in export markets.