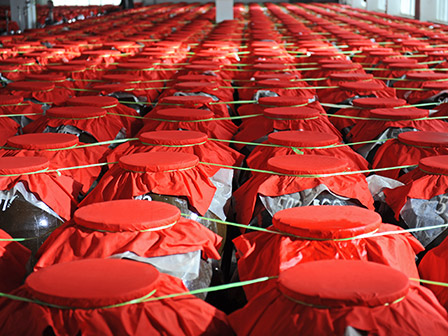 Yanglin Feijiu aging at a factory

There is a lesson to be learned somewhere in here but we have forgotten, or rather, expunged from memory, what that lesson is. One thing we do know is that Yanglin Feijiu (杨林肥酒) is possibly the strongest liquor we have ever had the dubious pleasure of drinking.

The potation is brewed in the town of Yanglin (杨林) in Songming County. The title's fei (肥) means 'fat', from which the alcohol content, and much of the flavor, is fermented. Fei can also be translated as 'fertilizer', and the alcohol definitely fertilized our thoughts.

With such a delightful and tempting name, we could not possibly stroll down the supermarket aisle without grabbing a half-bottle for ten yuan. Many of the brands on offer carry the slogan "Strong and Handsome Disposed Wine", and after becoming inebriated on the stuff, you can see why. We certainly felt strong, handsome, and thoroughly disposed.

Imagine the most pungent baijiu possible, mixed with a dizzying combination of aniseed, fennel, citrus, cloves and honey. It is best to drink feijiu with a bit of food, and close your nostrils before gulping it down, because the taste itself will seriously knock your socks off. But that is just the start. Once the grimace leaves your face and the sickly sweet spirit has burned its way into your belly, it starts to turn you on your head. And that is where the experiment got hazy and our abilities to communicate the effects in words broke down.

The next day we were left in an eerily jarred state of suffering with only a faint recollection of something having stirred our inner souls, or rather, violently flung them about. Recovering from this chemically-induced lobotomy, shaking and weak, we were, and still are, deeply fearful of ever trying it again. Yet, it has an almost magical allure. Lethal yet enticing, strong but sublime, Jekyll and Hyde. 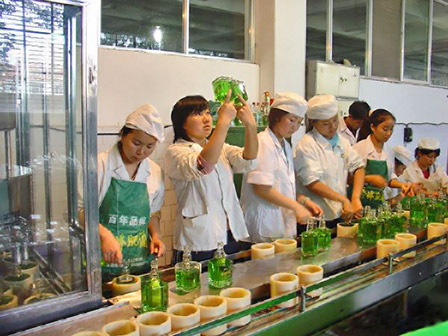 It is said that Yanglin Feijiu degrades cholesterol and is full of enzymes and vitamins that nourish the stomach, spleen and kidneys. And we are sure it also works well as an industrial cleanser, paint thinner and interplanetary rocket propellant. Perhaps it would not work so well as a fertilizer.

The drink was invented as a health tonic by an eminent Ming Dynasty medicine man named Lan Mao (兰茂). By 1880 Yanglin Feijiu was available commercially in its present incarnation. This is coincidentally the same period its western counterpart — absinthe — was enjoying its heyday in the Bohemian saloons of Europe.

The two drinks certainly look the same, taste very similar and share some of the same key ingredients. They are so much alike one could speculate that the Yunnan tincture is really a hybrid of a drink which made its way to Yunnan via 19th century French missionaries, just as some wines were brought to other parts of the province.

Still this remains idle conjecture and, as the Li Bai-esque official legend goes, Lan Mao discovered the recipe after falling asleep outside a temple in a drunken stupor. In his dream, a fairy visited him and spoke to him, explaining how to make a perfect liquor no one had ever tasted before. When Lan awoke, he set about creating the famed concoction. Lan was moved by spirits, as the saying goes.

There is an alternative story, however. In the late Qing era, a bookseller in Yanglin called Dai (戴) was very good friends with the owner of a drinking establishment across the street, named Chen (陈). The two men would often drink and talk together, and their children even married.

Dai knew a great deal about medicine and other subjects and also had a copy of Lan Mao's Southern Yunnan Materia Medica (滇南本草). Chen learned about this and he adapted one of the recipes to craft a potent new beverage for his customers. Chen's ingenious aperitif took off and never looked back. These days it's produced by the ton, mainly under the auspices of a local pharmaceutical firm with several premium 'gold' brands available.

Whatever the origin of the drink, Yanglin Feijiu is a special class of moonshine. Nothing comes quite close to having your timbers well and truly shivered by feijiu.

This is the drink to awaken the sleeping dragon inside and spark a night of unrivaled debauchery. Plus, it puts hair on your chest and is a great choice with which to surprise your friends. And if it's really not to your liking, it's great for cooking. So why not invest in a bottle and give it a try, but don't say you weren't warned...

Great story and great writing! Thanks for sharing.

Great article, I've always wondered about that little green bottle... "a night of unrivalled debauchery" ... hmmm a trip to the moon soon.

Nice article. I've always felt Chinese liquor gets an overly harsh rap. For straight drinking I'll definitely take certain types of baijiu such as homemade baogujiu, qingkejiu or mijiu over vodka. For something with a medicinal twist I much prefer jingjiu to Jagermeister.

I've never tried feijiu—perhaps scared away by the green color, which I always took to be food coloring—but perhaps that will have to soon change.

they have a QUALITY CONTROL team!! wow!

I think in coordnation with this story, GoKM should have a special 杨林肥酒 night at a nightspot of their choice. I think it could go well.....and end horribly.