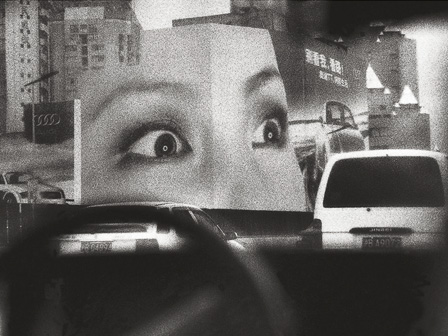 We once went to an archeology exhibit at the Yunnan Provincial Museum that featured no archeological finds whatsoever, and instead displayed a pair of hiking boots worn during a 2010 dig in a glass case for our viewing pleasure. Luckily, the arrival April 10 of the Festival Croisements, an annual event devoted to celebrating intersections of French and Chinese culture, has roused the sleepy museum from its usual slumber.

From now until May 20, the museum is playing host to two first-rate photography exhibitions: China in Kodachrome, a collection of rare color photos of China in the 1970s and 80s by Bruno Barbey, and The Instinctive Moment, a retrospective of works by the legendary Marc Riboud. The two French photographers had uncommon access to China at its most reclusive, and the resultant works are essential viewing as testaments to bygone eras usually kept under wraps. 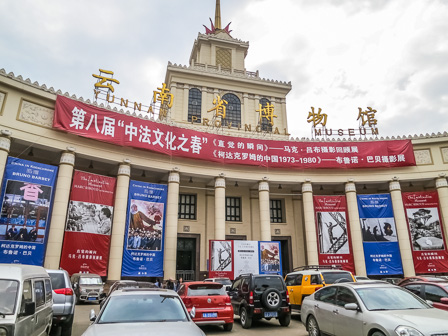 Much of Barbey's work on display dates from a trip he made in 1973 as part of the press corps covering French President Georges Pompidou's visit to China — the first time a Western head of state officially visited the PRC. These are important works, then, from a documentary standpoint, offering a rare glimpse into which of its many faces China would allow to be glimpsed at the time.

Barbey is fond of contrasting the ruddy vigor of propaganda posters with the banality of everyday life. It is here that his use of color seems most striking: surreal revolutionary reds loom over the rain-slicked blues and grays of a China turning towards capitalism. 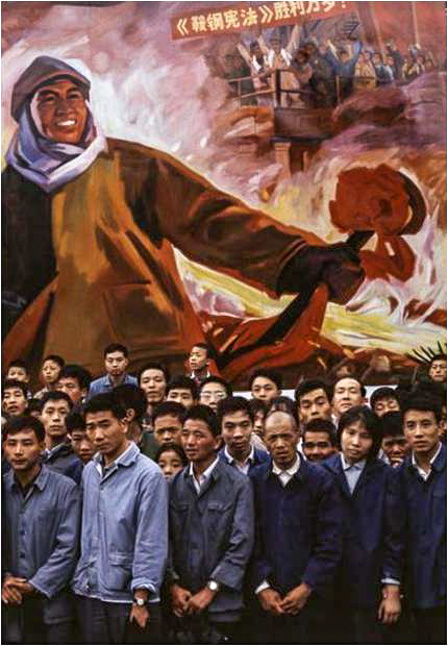 Unable to read Chinese, he nonetheless produces some happy accidents of juxtaposition between towering slogans and ordinary people going about their business. "Sprint towards the new millennium!" command a propaganda poster's ecstatic horsemen while the taiji in the park below raise their arms en masse in a serene zombie parody of progress.

The Barbey exhibit feels like a side note, however, to the sprawling, exquisite mass of the Riboud retrospective — nearly two full halls of primarily black-and-white photographs spanning the length of his globe-trotting career. The majority are from 22 visits he made to China between 1957 and 2010. 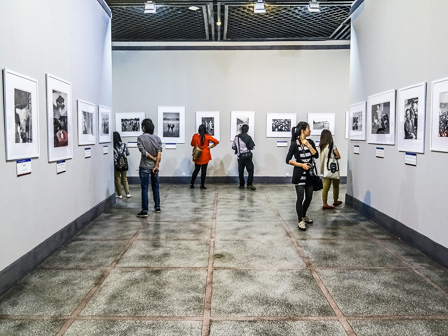 They've been arranged in what seems a rather haphazard fashion by curator Jean Loh, jumping between continents, decades and subject matter from one frame to the next. Perhaps it's an attempt to force viewers to consider works from a formal rather than thematic perspective; perhaps Loh wishes to organically recreate in us as we turn each corner the thrill Riboud must have felt every time he lucked across his next "instinctive moment". The effect in an exhibit as rich in content as this one, however, is slightly disorienting.

Riboud's work begs us to consider the benefits and limitations of remaining a perpetual outsider to one's subjects. Said limitations unexpectedly rear their most ugly head in one caption to a portrait of a nearly naked Nepalese child, which reads, "The little savage coming out of the jungle for a face-off with a photographer for the first time in his life." There it is, in both English and Chinese so that there is no mistaking it — Riboud's own words undermining the very dignity his well-crafted photos always afford his subjects. 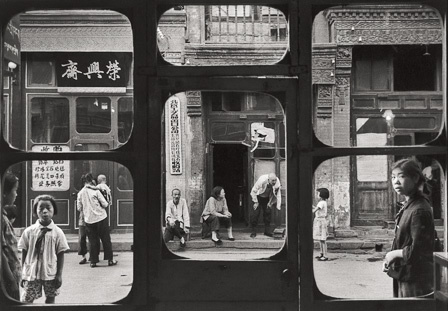 We forgive the photographer's gaffe, because his work so clearly transcends such a sentiment. This is in fact what is most impressive about Riboud. Despite the specter of that unfortunate caption, he always meets his subjects respectfully, head-on. As the outsider, he notices what may very well be lost to his subject and those around them — the classical, David-like tilt of the Nepalese child's hips, or, in the very first photograph he took in China, the dancer's grace with which a farmer folds into herself during a long train ride on a hard seat.

In a province that affords us so many opportunities to celebrate all sorts of colorful "others", who among us hasn't zoomed in for a picture of some woman in some headdress and not taken the effort to make that image more than a quick, appropriative act? Riboud, working in the humanist tradition of his mentors, Henri Cartier-Bresson and Robert Capa, never allows himself to take this sort of shortcut. 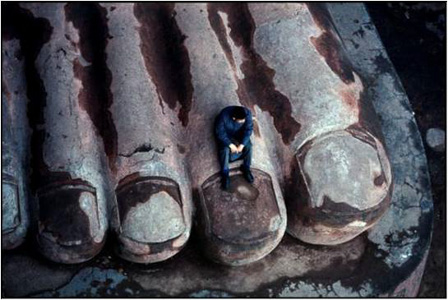 The results are nearly always stunning, and certainly immensely instructive for anyone trying to retrain their eyes to see as an outsider does. In 2005, Riboud photographed a line of blankets hanging out to dry in the Beijing sun. The caption names the patterns — cherry blossom, dragon, and peony, a beautiful litany for spring. How many times have we seen patterns such as those and simply walked past?

One college student we spoke with at the exhibition admitted that this was the first time he'd ever seen real images from the Cultural Revolution. Though both exhibitions show us China through the very subjective point of view of two foreigners during a period when reportage was closely monitored, they are nonetheless a lyrical documentation of a past that seems to grow less and less relevant in the face of new opportunities for previously unimaginable consumption.

Given that Chinese history seems ever more a palimpsest written over the vellum of collective memory, we can only hope that Kunming will continue to host exhibits that make available whatever not-so-dirty historical laundry there is to air.