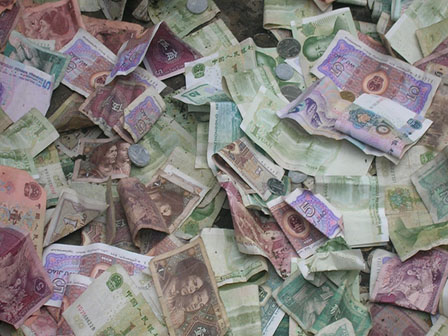 Following a national trend begun earlier this year by several of China's first-tier cities, Yunnan has raised its minimum wage. Different areas in the province will experience varying hikes in basic salaries, China Daily is reporting.

Under the newly announced regulations, workers earning the hourly minimum in Kunming will be entitled to a salary of 1,265 yuan per month. This level of compensation affects the Spring City districts of Wuhua, Panlong, Xishan and Guandu as well as the city of Anning.

Other county and prefecture level cities in Yunnan will see wages rise to 1,130 yuan per month. Workers employed outside of these areas will be paid a minimum of 955 yuan per month. Minimum hourly pay in these three classifications has been increased to eleven, ten and nine yuan per hour, respectively. The new law impacts hourly employees of both publicly and privately owned companies.

Yunnan's level of basic compensation now ranks ninth nationally among provinces, whereas at the end of 2012 it was second to last. The province has upped its lowest salary threshold ten times since instituting pay standards in 1995. The most recent changes account for an increase of just under 15 percent.

In February of this year China's State Council released a plan addressing the country's lowest paid workers. Part of the strategy was to increase basic salaries, especially for those employed by state-owned companies.

At the time of the State Council announcement, Beijing had already raised its minimum wage to 1,260 yuan per month. Shanghai, Shenzhen and Hong Kong were all quick to follow suit. In the first quarter of 2013, eight provinces and major cities increased their minimum wage requirements.

China's economy has slowed noticeably over the past twelve months and wage hikes are seen by Beijing as a way to increase consumer spending. They could also be an attempt to adjust a widening income gap.

The country's Gini coefficient, which is used to measure wealth inequality, was estimated by the Chinese government to be 0.474 last year. Some Chinese academics have arrived at much higher numbers. The United Nations uses Gini calculations as a predictor of social instability and unrest, labeling any coefficient exceeding 0.4 to be problematic.

A good move. Now the question is: will the appropriate propaganda departments make sure the word gets out?

Stop on red IF there is a traffic cop standing there.

Do they have a minimum bribe amount??

Good to know. I wish that everybody should follow what China did for the sake of everybody. Costco's CEO, in a move contrary to most merchants, states he would like to see the federal minimum wage increased to $10.10 an hour. That is even higher than the $9 an hour President Obama requested in his State of the Union address. A <a title="Short-Term Loans Bridge the Payday Gap" href="personalmoneynetwork.com/short-term-loans/">short term loan</a> can help you pay for things until you get a pay increase.