Eating bugs for health and environment 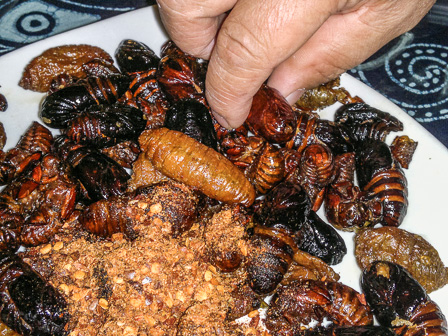 Editor's note: This article was originally published on the website EastBySoutheast. It has been reprinted with their permission.

Simao Wild Food Restaurant, a small Jingpo minority eatery in the southern part of Kunming, has made a name for itself largely because of its menu of what some would call bizarre food. In addition to serving up odd delicacies like bamboo rat, giant Mekong catfish, ferns, fungi and all sorts of wild vegetables, the restaurant also offers a variety of insects.

"We grew up eating these," one woman told us while holding a fried grasshopper between her chopsticks. "Sure, when you think about what you're eating, it can seem kind of gross. But they are tasty." She sits at one of 15 large tables occupied by a wedding party where everyone is chowing down on the crispy little critters.

Grasshoppers aren't the only bugs on the menu. The Simao Wild Food Restaurant also fries up cicadas with legs and wings still attached, giant coconut tree grubs and black armored insects about the size of a thumb, called chestnut bugs. The restaurant's owners say they sell more than 1,000 yuan in insect dishes each day. 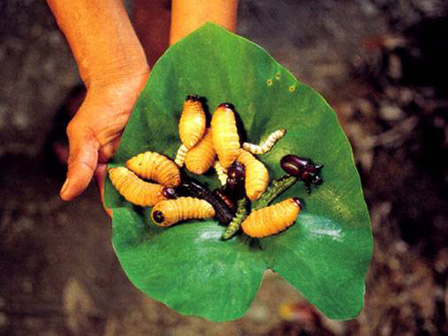 Although many of us may cringe at the thought, nearly one in three people on the planet eat insects as a part of their diet. Food prices across the globe continue to soar and parts of the world face worsening food shortages. People are beginning to agree that insects can be a viable food source. With hundreds of known edible insect species, and an estimated 40 tons of insects crawling around for each person on earth, it's difficult to deny that it just might be worth getting past our squeamishness when it comes to eating bugs.

China's meat consumption has nearly quadrupled over the past 30 years to an estimated 71 million tons per year. That is the equivalent of about 53 kilograms per person every year — still only half of the amount consumed by the average American. If China's growing taste for meat does not slow down, the environmental consequences could be disastrous.

As China's pollution problems and water shortages continue to worsen, most fingers are pointed at the rapid rate of urbanization and industrialization. Few are recognizing that the meat industry should at least shoulder some of the blame. Livestock produce more greenhouse gasses than all automobiles and other forms of transportation combined. 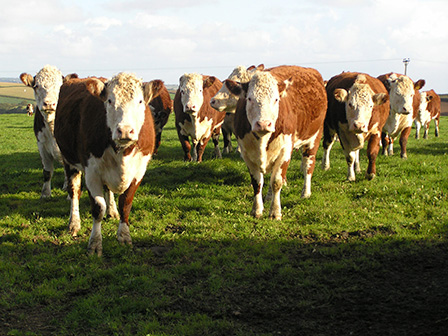 Don't stand downwind from these guys

Cows alone are responsible for about 37 percent of all human-induced methane emissions. The greenhouse gas methane traps 23 times as much heat as carbon dioxide. Raising an equivalent amount of protein from insects would cut total methane emissions from humans by more than one-third.

About 70 percent of the planet's agricultural land is used or affected by the process of raising livestock. Beef requires 13,000 liters of water and ten kilograms of feed to produce one kilogram of meat. Raising insects requires one-sixth as much feed, consumes very little water and also produces almost no equivalent methane emissions. Crickets — the most widely consumed insect in the world — can produce 100 larvae each per month.

In addition to being more environmentally friendly, eating insects is also very healthy for those looking to get their daily protein intake from animals. On average beef contains 18 percent protein whereas grasshopper meat is nearly 60 percent protein. Eating insects also can cut out up to 90 percent of the fat meat-eaters currently ingest. 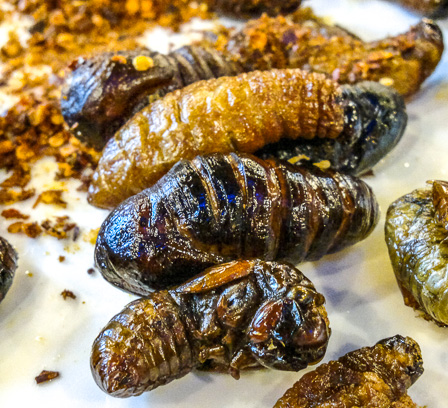 Thailand is the largest consumer of insects in the world with annual edible insect sales hitting US$50 million. Kunming food wholesalers are hoping to tap into this market.

Lin Zufa (林组发) runs a wholesale insect shop where he sells an assortment of frozen insects, specializing in wasp larvae. Wasp larvae are Yunnan's most treasured edible insect and they sell for 150-250 yuan (US$24-40) per kilogram depending upon species. Selling wasp larvae alone, Lin takes in nearly two million yuan (US$320,000) each year.

If Kunming's insect business can continue to grow, it may be more than just a small step in the right direction toward a more environmentally friendly future. Perhaps insects can fulfill some of China's growing demand for meat, and may simultaneously compensate for its rapid industrialization. So food prejudices aside, if China hopes to solve its water and pollution problems it might just start with a plateful of fried crickets. 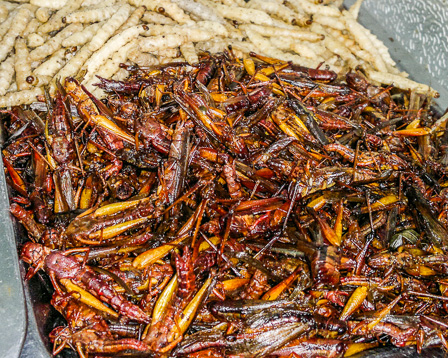 I've tried most of these in the past. Edible? Yes. Tasty? No, not in my experience, unless smothered in other herbs or sauces. I'm surprised the cicadas in the article were eaten with wings and legs attached. I've only ever seen them eaten wingless (...and only eaten them when legless!).

As someone with a life-long, irrational insect phobia, the thought of this is hard to take. However, I have tried smaller insects, and I found them to be crisp, nutty, and to have a citrus-like quality. I really want to force myself to eat some of the bigger ones, and I shall one day.

"Livestock produce more greenhouse gasses than all automobiles and other forms of transportation combined."

I've tried plenty of insects in Yunnan and while they are ok and I will happily eat if needed I don't think they are necessarily the answer to world hunger.

This TED talk by Allan Savory pretty much destroys much of the livestock/greenhouse gas theories. If it works, it would be a far better solution than grains or insects.

The solution to world hunger probably has a lot more to do with the unfair distribution of wealth than people's diet, in my opinion.

Also, the mass consumption of processed and packaged foods is causing the most harm to the environment, not meat.

@Greginchina, thanks for the link. That Ted talk really shows how desertification is the other side of the argument. We need to pay equal attention to how we absorb greenhouse gasses, not just how we emit them. And I think he only proves how wasteful our present livestock situation is. Changing livestock to mobile, native grass-eating groups could reclaim grasslands and absorb more CO2. But his argument is not for more meat consumption, it is for smarter livestock raising. Animals need to be raised on the grass and out of the factory because it is the farms that grow feed for livestock that slash and burn and destroy fertile soils.

I believe Savory would agree that using his methods in combination with less methane emissions would be the best of both worlds.

"Eating insects also can cut out up to 90 percent of the fat meat-eaters currently ingest."

Some saturated fat is needed by the body to maintain good health.

Beef is a rich source of many minerals including zinc, iron, selenium, phosphorus, magnesium potassium and copper. Beef is also rich in many vitamins including vitamins B12, B6, riboflavin, thiamin and pantothenic acid. I would be curious to know the nutritional breakdown of some of these insects.

Also, not that I believe every word in the Bible is the absolute word of God, but "all of these animals are forbidden: shellfish, bear, shark, rabbit, birds of prey, predator animals like wolves, dogs, cats, most insects, camel, horses, and a number of others."

There's a question that has been bugging me: can those insects also be a source of contamination?

About transportation versus life stock fart. It's true (in terms of tons in relation to efficiency) but also because car combustion engine produce greenhouse gas in a quite small amounts (comparitively).

But considering the waste or resources just to produce on damn kilo of meat, is unbelievable and doesn't make sense. From the soil to the chemicals we feed those poor creatures. To mega tax, non-green food would be a good option. There si a lot of fake green food but that is still better than the best non-green food.

Some insects taste good, if you don't eat them in those touristy spots. I had some insects in a proper (local) food place and it wasn't too bad. If you overcome you creeps.

The whole problem is so far progresed that is needs help everywhere, soiltreatment, farming, water treatment, animal food, and most important a change in our minds. If you buy a burger for a US$ (&the prices we expect), you can figure that everything in it is from exploitation of others and the environment.

So in my opinion.....Go beetle, go! But I think there are dangers as well. When it becomes a big business then all the people in life stock would change and let it become the same rotten business. And I think a few escaped colonies of something after a healthy amount of mutation can kill the same amount of vegetation as they saved....but in minutes.

Is it a great way to balance diet and help nature? ..Sure! but it needs to be handled with care.