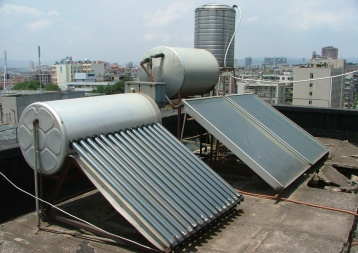 Kunming has some of the sunniest skies found in any Chinese city. Many visitors to the Spring City wonder why with so many beautiful days each year there aren't more rooftop gardens, cafes or restaurants. One major reason for this is the overwhelming number of Kunming rooftops that are covered with solar water heaters.

A new report by the Worldwatch Institute has declared Kunming to be China's "Solar City", primarily because of the prominence of solar water heaters in the city. The report estimates that more than half of the city uses solar energy to heat its water.

According to the article, around 30 million households throughout China have solar water heaters - nearly eight percent of those households being located in Kunming. Solar water heaters are becoming increasingly common in other parts of the country because of the growing availability and affordability of solar technology.

Kunming is emerging as a city at the front of China's solar industry - and not just as an end user. Yunnan Normal University is home to the Solar Energy Research Instititute, which was founded in 1971 and is playing an increasingly important role in solar technology research and development.

In recent years the Institute has cooperated with the Ford Foundation via the foundation's Pathways to Higher Education program to expand research, development and use of solar technology throughout Yunnan. The Institute even offers free testing services for Chinese solar companies seeking certification for their products, essentially helping to expedite new products and technologies to the market.

The central government in Beijing is also funding the construction of 30 solar power plants in Yunnan, working through Yunnan Normal's Institute. With a greater number of sunny days than the majority of other Chinese cities, the facilities and manpower at YNU's Solar Energy Research Instititute and a desire by the national and provincial government for cleaner energy alternatives, Kunming is moving toward becoming an alternative energy leader for cities around China and the world.