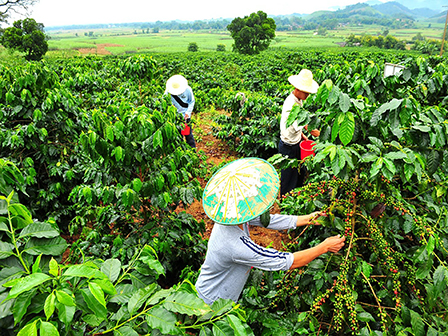 Swiss food and drinks conglomerate Nestlé has announced it is expanding its operations in Yunnan with an eye toward promoting coffee consumption across China. The company has signed a memorandum of understanding (MoU) with the prefectural government pledging to invest 100 million yuan (US$16 million) to build a coffee farming institute in Pu'er.

The planned Nescafé Coffee Centre will have warehouses, laboratories and education facilities. According to a press release announcing the MoU, Nestlé plans to train 5,000 coffee farmers, agronomists and business professionals at the center each year.

Over the past several years the Nestlé has steadily increased its purchase of Yunnan coffee and last year bought more than 10,000 metric tons of beans. This accounted for 20 percent of the province's total coffee production. The company has said it has plans to double coffee procurement in Yunnan over the next two years.

The Pu'er government has actively been promoting coffee cultivation as an alternative to volatility-prone tea. Nestlé's announcement could signal the beginning of a buying war with rival Starbucks. Both companies already have large purchasing presences in Yunnan and last year Starbucks established a joint venture coffee sourcing company in Pu'er.

At the time Starbucks made the announcement, the Yunnan government set a goal of increasing Arabica bean output to 200,000 metric tons by 2015. That target has since been scaled back by half, perhaps do to a sluggish international coffee market.

Coffee is increasingly popular in China, but it is only just beginning to be drunk by Chinese. According to Chinese coffee industry statistics, the average mainlander drinks only three cups of coffee per year compared with a worldwide per capita average of 240 cups.

Such statistics, when combined with China's population of 1.35 billion, suggest that coffee consumption in China is beginning what could be a long period of sustained growth. This has major economic implications for Yunnan, which accounts for 98 percent of the country's total coffee production.

That is great news for the farming industry in Yunnan. Should create jobs, and more people will get trained in advanced agricultural techniques.

Sounds good - if the farmers are compensated fairly.

I have a question. If coffee is so abundant locally, then why are coffee prices in cafes and supermarkets the same as in eastern China?

Nestle - commonly voted as one of the worst companies in the world as it supports child slavery on the Ivory Coast and has, for years, pushed infant milk formula in poor countries as being "better than breast". Be very careful about giving them any kudos for their perceived support of local farmers, most likely they are simply looking for a cheaper way to get their product and don't care if getting their product means breaking labour laws or damaging the environment. They have consistently shown they are a company which does anything at all to improve their bottom line whether completely illegal or morally grey.

Though he left off the most important thing- they make shit coffee!

All the rest is potentially forgivable if they made a good brew.

Ref. shit brew.
That is more to do with the processing, and not so much the bean.
There is a reasonable variety of different 'flavours'/roasts of Arabica beans available. Some of it really good.
Nestle seem to specialise in instant coffee. The top one is Gold Blend which is not very hard to find, probably too dear for local tastes, but a damned sight better than UCC's offerings IMHO.

This blobbles is stuck in the fifties or sixties, all these issues regarding milk-breastfeeding and slavery labour have long been solved and are no more issue now. Be a bit more positive and be happy that farmers have now a crop which can give them a steady income. Johannes

Sorry, but if anyone spends 5 minutes googling Nestle, some of these issues are still relevant.