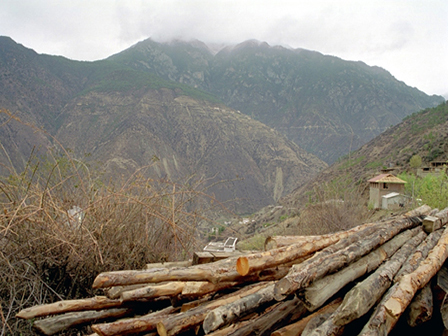 Two officials in Yunnan's southeastern Wenshan Prefecture (文山市) have been suspended and are being investigated for abuse of power. They stand accused of organizing and profiting from illegal logging operations covering more than 1,000 acres.

The story was broken by investigative reporters for CCTV working on tips received from Wenshan locals. Journalists filmed loggers cutting down fir and cedar trees in an area falling under the auspices of the Yangtze River Natural Forest Protection Project (长江上游天然林保护工程). The logging operations are located in Maguan County (马关县), through which several minor tributaries of the Yangtze River flow.

During an interview with CCTV journalists, Du was reported to have admitted to long-term logging operations in Maguan County but claimed they were undertaken solely for the benefit of the local economy. The ongoing investigation is being carried out by the State Forestry Bureau and the Forestry Department of Yunnan.

Forest stewardship and reforestation have become a national priority over the past several years. Between 2008 and 2011, Beijing spent 46 billion yuan (US$7.4 billion) on programs encouraging farmers nationwide to plant trees instead of crops.

Yunnan makes up only four percent of China's total land area but is home to the majority of the nation's plant species. The province has made modest gains in forest protection but those gains are threatened by illegal logging and an ongoing four year drought.

Amazing how locals can tip off an investigation like this to uncover criminal activity.

"solely for the benefit of the local economy"

I am sure some of it was spent locally.
New cars, apartment maybe.

Good on CCTV. Here I thought they were mainly a mouthpiece.

Silly officials. Don't they know the best way to get lumber is the old-fashioned way? Just exploit the Burmese like they've been doing for years.

Agree. The traditional way is to go to Burma and other SE countries, athough these Wenshan officials are probably low on the ladder of influence hence CCTV's devulging of their illegal activity.