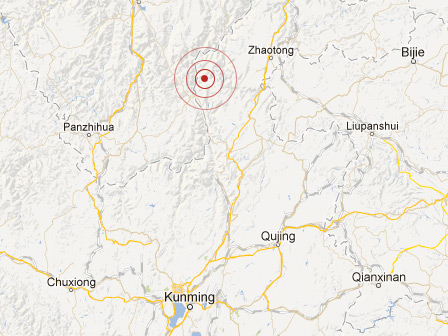 Editor's note: This article was most recently updated on February 21, at 3pm.

An earthquake rattled Zhaotong prefecture (昭通市) February 19 at 10:46am. The United States Geological Survey reported the temblor measured 4.9 on the Richter scale and occurred roughly ten kilometers below the surface of the earth.

The epicenter of the earthquake occurred in Qiaojia county (巧家县), 350 kilometers due north of Kunming. The quake was relatively shallow, which often leads to more pronounced destruction on the ground. However, it appears the area most effected was sparsely populated and damage not as severe as previous earthquakes in the region.

Four hours after the earthquake, disaster relief officials reported the collapse of five houses, with two others sustaining structural damage. However, those numbers have steadily grown over the past two days. It now appears dozens of houses collapsed and several hundred others are no longer fit for habitation.

There have been no reports of fatalities although eight people suffered injuries from falling debris. Two were reported to be in serious condition. Relief agencies have so far sent tents, quilts and water to the affected areas.

The Zhaotong area has been repeatedly battered by natural disasters over the past several months. Flooding caused by torrential rains in July 2012 left more than 130,000 people homeless. Less than two months later twin earthquakes struck Zhaotong within hours of each other, leaving 81 people dead. More recently, landslides in January killed 46 villagers near the Sichuan border.

Yep, appears to be of Spanish origin.

Further details have been added to this article since its original publication.

Might b bad omen for risk earthquake in kunming

i have feeling we could know earthquakes but i guess we need more harmony and feeling with elements and animals, study daoisms and the laws and kaos of the elements...