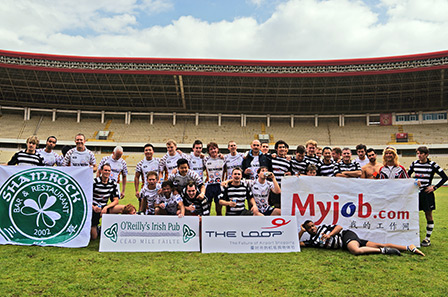 Editor's note: The following article was contributed by Tristram Barker, captain of the Kunming Rugby Club. If you have an event or article idea you would like to submit, please get in touch with GoKunming via our contact form.

This Saturday at 2pm, at the Southwest Forestry University, Kunming Football Club (Kunming FC) takes on Kunming Rugby Club — known to their legions of fans as the Flying Tigers.

The match is the first annual cross-code duel between the two clubs. Kunming FC and the Flying Tigers hope that the match will attract newcomers eager to give either or both games a go. The two clubs look to cement a relationship that was initially a bit fractious as the two competed for players.

Nowadays football and rugby co-exist harmoniously in the Spring City and a number of individuals play for both clubs. Jared Price and Luca Cunia will play a half for each side to give the rugby players the benefit of their football skills and the soccer team some inside knowledge on rugby.

The game kicks off at 2pm and there will be four 15-minute quarters. Rugby will comprise the first half with football to follow. Tries and goals will both work out at a point each. For safety reasons, the rugby half will be touch and while the Tigers may miss an advantage in not playing contact, they hope to show that speed and evasion are just as important as great tackling. There will be further competition in drinking 'boat races' at the after-party at O'Reilly's Irish Pub.

Approximately 200 amateur football teams exist in the Spring City but Kunming FC is the only expat team in the city. Kunming FC have been in existence for 15 years and eight years ago played a key role when organized municipal leagues began to solidify.

The club has been managed by William Gray since 2009 and currently features players from Europe, Asia, the Americas, Africa and, of course, local Kunmingers. Team captains are James Cafferty and Liam Slyth.

Tomorrow's game also serves as a warm-up for Kunming FC's upcoming games against the Beijing Barbarians. Those matches — to be played on the weekend of February 23-24 — mark the first time a visiting football team has ventured to Kunming to compete. 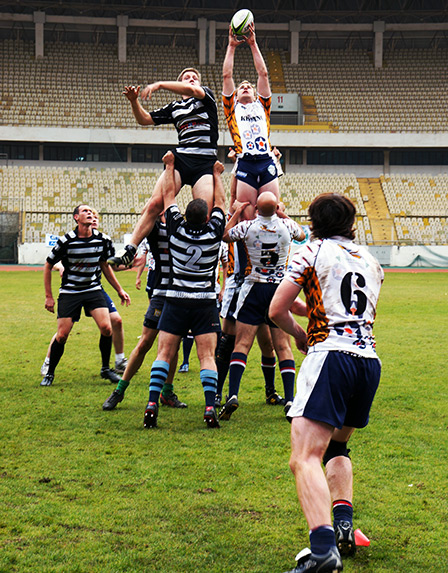 Flying Tigers win a line-out throw against the Chengdu Pandas

The Flying Tigers are managed by President Jeff Fuller and captained by Tristram Barker. Shortly after the 2011 Rugby World Cup the Flying Tigers were formed with only five players. They met for touch rugby on the Yunnan University volleyball courts in front of small crowds of curious locals. The crowds never got very bif but after the experienced Chengdu Pandas announced a visit to Kunming, numbers suddenly swelled to a match-day high of 25.

A follow-up trip to Chengdu saw the Flying Tigers place second in a Rugby Tens tournament. Later, a fully-funded trip to Shanghai was not so much of a success on the field. However, in December 2012 — a year after the club's inception — the Flying Tigers convincingly beat Chengdu 26-7 in a rematch at Kunming's Tuodong Stadium.

Travel is an essential part of rugby in China as there are clubs in all major cities and an increasing number of annual tournaments for both men and women. In May the Kunming rugby club plans to attend a Xiamen tournament and after-party on on Gulangyu Island.

The Flying Tigers have been fortunate to attract excellent sponsors since their founding, including local businesses such as The Loop and O'Reilly's Irish Pub. These generous businesses help to subsidize travel costs and pay field fees as well as provide equipment and uniforms.

In terms of predicting tomorrow's result, both teams expect to dominate their respective sports but aggregate scores are difficult to pick. "I'm pretty sure we'll win the boat races though," says the rugby captain.

the rugby team won the boat race by a landslide

Great after party too

Did you have the boat race before the match?