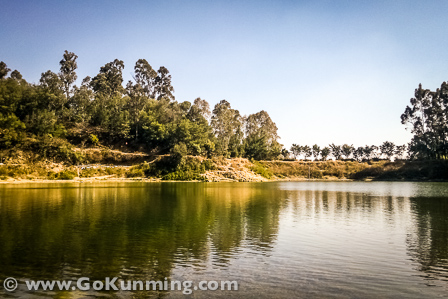 There are many places on the outskirts of Kunming where people can go to get away from the city. In the past GoKunming has, among other things, taken bike trips to Changchong Mountain (长虫山) and hiked to Yu'an Shan Public Cemetery (玉案山公墓) in search of tranquility and a good view of the Spring City.

There are few places we've found that offer multiple outdoor exercise options free of charge and Zhaozong Reservoir (昭宗水库) is one of them. Located about 30 minutes by bicycle west of the city center, the man-made lake is a relatively peaceful place to go for a swim or hike.

The reservoir is not large, only 200 meters across at its widest point. Although the name suggestes otherwise, it does not supply Kunming with drinking water or water for industrial use. Instead it appears to be a simple drainage catchment for rainwater runoff from the surrounding hills.

There are no pumping facilities or drains at Zhaozong Reservoir — it is simply a large pond. When compared to other Kunming lakes it is incredibly clear and clean. On the January day we visited the water was also shockingly cold. 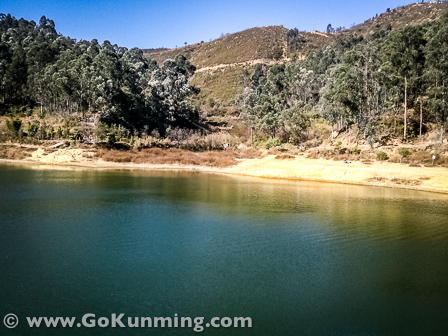 The lake is bordered on three sides by stands of eucalyptus and pine trees. Ten meters down below the level of the reservoir's earthen embankment Kunming's familiar sounds faded away. Through the relative silence we could still hear the noon running of the city's old narrow guage train as it blasted its horn while passing ponderously through traffic stops.

It was a weekday following a winter cold snap and the shores of the reservoir were largely empty. A few couples sat eating picnics in the sun but overall the area was unoccupied. On warmer days and weekends, however, the lake can get busy. During those times the steep entrance path is lined with barbecue and drink vendors hawking their wares to the crowds.

The day we were there the largest group of people was an assemblage of older men sunning themselves on a bald patch of ground. Occasionally one of them would leave the group, walk into the water and swim leisurely across the lake. Most of them were wearing Speedos or underwear and swim caps.

We spoke to Mr Tian, who said he had been swimming in the reservoir every day, without fail, for more than thirty years. Even on rare days when it snows in Kunming, Tian goes swimming. If he misses a day it is because he has taken a trip to Fuxian or Yangzonghai to take a dip in a different locale. 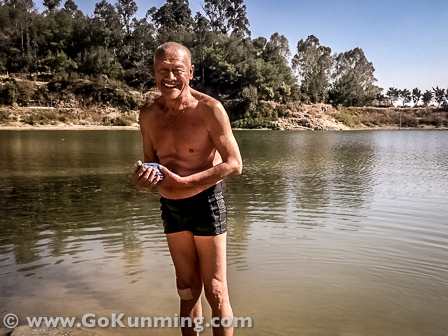 Mr Tian does not look to be pushing 70-years old

Tian, who said he was in his late sixties, swims for his health. "I rarely, if ever, get sick. It's because of the swimming. Health insurance is incredibly expensive and swimming is basically a preventative health measure for me," Tian told us.

He went on to explain that people new to the reservoir should not just jump in and try to swim across. According to Tian, 13 people drowned in the swimming hole in the past year. He personally witnessed a young man drown in 2012.

"Swimming is for health and not about face or how strong you think you are," he said. "People overestimate themselves against the cold water — then they get to the middle of the lake and go into shock. Towing a personal buoy behind you is very important for when you get too tired or cold." When Tian set off for a swim across the lake he took no safety equipment with him.

A small forest sits to the west of the reservoir at the bottom of Mian Mountain (眠山). Most of the wooded area is cordoned off, with barbed wire and signs warning of both fire and erosion dangers nailed conspicuously to trees. However, there is one paved path to follow. 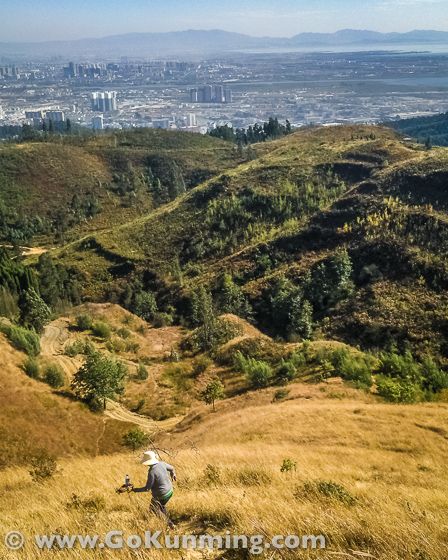 The path snakes uphill through the woods with other trails periodically branching away from the main one. Foot traffic was not very heavy when we were there, which was good because two people heading in opposite directions would have a difficult time passing on the narrow stairs. While the path's several pavilions are often packed with picnickers, we had them and their panoramic views of the city to ourselves.

As the trail continues to climb the trees begin to thin, where in 2010 a forest fire swept across the area and threatened to engulf nearby Bamboo Temple. The temple was spared but most of the mountain's trees were not.

After a certain point trees disappear entirely and the mountain is covered instead by tall wispy grass the color of straw. The path peters out but the hike is relatively easy regardless. Getting to the top of Mian Mountain is not terribly strenuous and takes about one-and-a-half hours. The barbed wire ends down where forests still stand, making the mountain a wonderful place to let a dog run.

Leaving from the city center, take Kunrui Lu (昆瑞路) heading northwest. Confusingly this street is also called Dianmian Dadao (滇缅大道) on traffic signs. Follow Kunrui Lu as it veers west (left) through the Huangtupo Interchange (黄土坡立交桥). You should now be underneath the elevated section of Kunrui Lu/Dianmian Dadao. After two kilometers the road will bend to the south. Follow the road until it meets up with the West Third Ring Road (西三环). 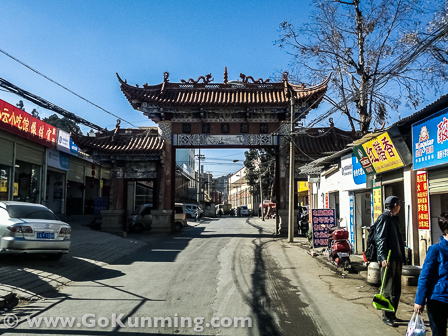 Cross under the ring road shortly after crossing railroad tracks. Take a quick left on Zhaozong Lu (昭宗路) and pass under the gate pictured above. Take the next available right and then turn left before reaching the Forest Lake (森林湖) gated community. This road will end in a parking lot and Zhaozong Reservoir will be up the hill to your right. Cab drivers generally know where the reservoir is and charge an extra 25 yuan to transport a large dog.

It's a swimming pool in summer time, a lot of people go swimming in Zhaozong reservoir for free.

Since I live on Zhao Zong Road I decided to pay this reservoir a visit via bus #7 which is 2 stops from my home.

The first thing I noticed is that there is plenty of constructuion going on - a new retaining wall is being built as well as a brand new pumping faciltiy with several large pipes to divert the water.

At the time this article was written, this reservoir may have just been a pond but that is no longer the case. "There are no pumping facilities or drains at Zhaozong Reservoir — it is simply a large pond".

The construction workers said that because water is such a precious commodity in Kunming every drop will be put to use in the near future.

There were at least 20 redundant signs on the walking trail every 10 meters that clearly read - NO SWIMMING!