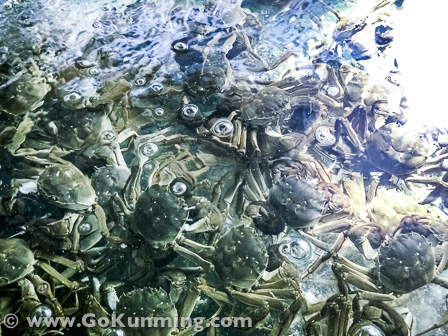 Kunming is not the furthest Chinese city from the ocean, yet when in search of fresh seafood it can often feel that way. Nevertheless, there are places in the Spring City to buy fresh fish as well as all manner of sea life. The Hepingcun Wholesale Seafood Market (和平村农贸海鲜综和广场) is not in the most convenient location, but if fresh fish beckons, it has one of the largest collections of seafood shops in town.

The market's main entrance is through a large gate crowned with a three-meter long billboard of a blue shark — making it fairly easy to spot. A long lane leads to the market proper. The alley is lined with people selling everything from fruit to cell phones to truffles and bags and bags full of caterpillar fungus.

Passing up the chance to buy our weight in fungus, we entered the market through one of its many doorways. It was chilly and dim inside. Our eyes took a moment to adjust as we wondered at the cold. Then it became obvious. 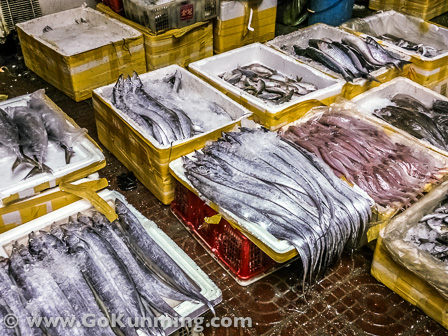 Stacked on every available inch of floor space were foam packing cartons filled with ice and fish. We had to be careful not to step on the merchandise or tumble into the tubs of fishy water littering the floor.

There are two ever-present sounds at the Hepingcun market — the hum of aquarium water pumps and the screeching of polystyrene boxes being ripped open or packed shut for shipping. The floor was covered with a slick film of dirt, fish goo, spilled water and melting ice. We took note not to wear nice shoes on our next visit. 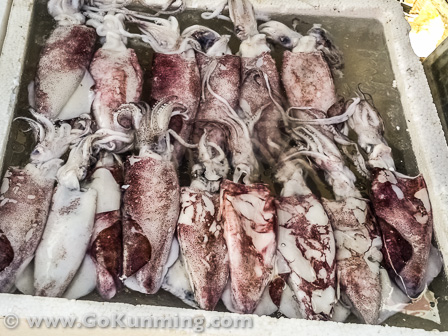 We walked past rows of freshwater aquariums containing a large array of fish. Stopping at one stall selling only fish packed in ice, we asked the proprietor what fish were freshest. He pointed nonchalantly to a carton of squid that appeared to be slowly liquefying.

Seeing we were not very interested in the squid he led us back outside to another shop and pulled the lid off two large polystyrene containers. Inside were two nearly meter-long salmon. The shopkeeper told us they were caught the previous day in the East China Sea and then flown to Kunming. He quoted us 480 yuan per kilogram and said the price would drop significantly if we bought in bulk. 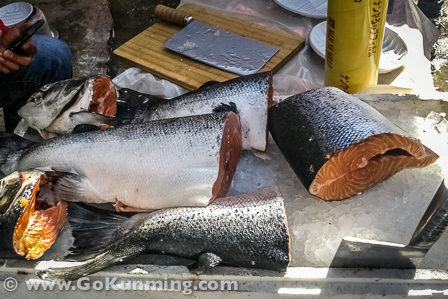 Back inside we passed more iced-down squid, as well as piles of eel, trout, cod, halibut and other fish we were unable to identify. Despite the shark sign at the entrance we saw no trace of sharks or their fins.

The fish section of the market gave way to tanks filled with crustaceans. Typically the shops were arranged with buckets of snails, oysters or scallops lining the hallways. Inside were aquariums containing prawns, crabs, lobster and even huge tanks filled with geoducks.

Most of the crabs were from Shanghai and Suzhou. Although we had no way to verify the veracity of their claims, vendors showed us live lobsters they said came from Australia, Maine and Boston. Maine lobsters were the most expensive and cost 500 yuan per kilogram. 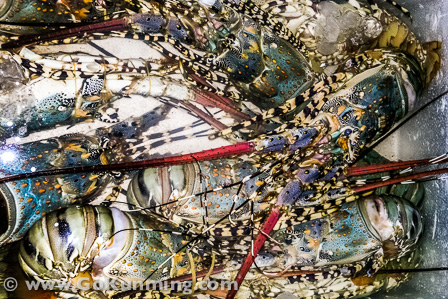 We were growing a bit tired of the fishy smell and of slipping around on the floor so we decided to take a look upstairs. Reaching the second floor required some courage. The only way up was via an escalator that had long ago stopped working. It appeared fish scales and water could have been the downfall of the escalator as it was completely slimed with both.

The second story of the Hepingcun market is one big butcher shop. The first stall we saw had just-gutted goats hanging up to drain. There was also the usual assortment of fresh pork and fowl options as well as deer and donkey meat. 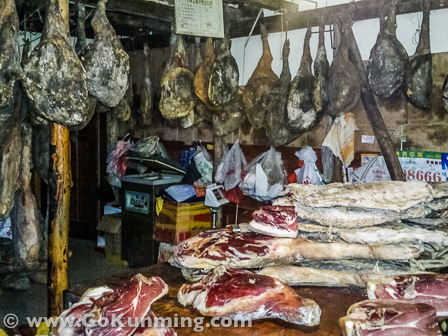 A side shop had one of the largest collections of salted ham we have seen in Kunming. Dozens and dozens of preserved pig legs hung from the ceiling. One sat, thinly sliced and inviting, on the store's chopping block. We tried a piece and it was salty goodness.

Before leaving we took a peak at the third floor and found a small and unimpressive vegetable market. We negotiated our way back down the escalator and returned to a shop selling prawns. After a bit of haggling we departed the market with a bag of squirming crustaceans and wandered what the chances were of cooking up a decent gumbo. 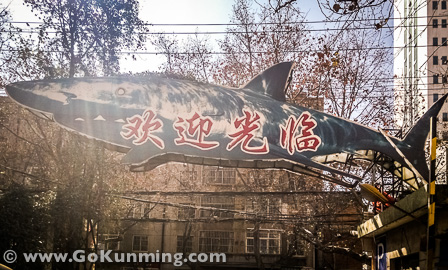 The Hepingcun Wholesale Seafood Market is located in Guandu district. It can be reached by bus lines 26, 52, 57, 60 and 67. Get off the bus at the Hepingcun stop (和平村站) on Chuncheng Lu (春城路). Walk north 50 meters and turn left onto Wujing Lu (吴井路). The market is halfway down the block on the righthand side of the street. Look for the shark billboard. © Copyright 2005-2021 GoKunming.com all rights reserved. This material may not be republished, rewritten or redistributed without permission.

Well found! Sounds worth a visit.

Did you see and "disputed islands" fish, like they are selling in Shanghai?

Directly across from the market is a large Post Office. You can buy Silver Pandas (1 ounce) on the second floor.

Patrick wrote: "Although we had no way to verify the veracity of their claims, vendors showed us live lobsters they said came from Australia, Maine and Boston. Maine lobsters were the most expensive and cost 500 yuan per kilogram."

This price includes on the spot 'jiagong' cooking preparations (~20rmb per 500g) with at least five cooking methods to choose from. Steamed w/ garlic was divine. Chefs were not frugal with the garlic. Dinning area and utensils provided inside and outside Hema.

The ever popular crayfish (aka freshwater lobsters) are also selling like hotcakes. 1.5kg for 95rmb (with Hema app discount). There's a continuous line for these 1.5kg boxes of cooked, ready-to-eat crayfish. No line if ordered online with their Hema app, delivered to you in one hour. Same goes for everything else in the supermarket.

Overall, I was disappointed with the supermarket itself. Live seafood section, particularly their freshly cooked final products such as the Boston lobsters were impressive.