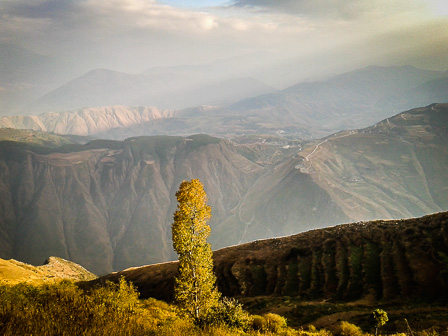 Editor's note: GoKunming recently cycled from Dongchuan (东川) to the confluence of the Xiaojiang (小江) and Yangtze (长江) rivers. This article is the second in a series of four about travelling in northeastern Yunnan. The first day's ride was through the Hongtudi Scenic Area.

We awoke to the sounds of geese and goats having a contest to see who could be the most annoying. After raggedly packing our belongings, we stumbled outside. Our breath billowed around us and frost covered the ground. The breakfast menu had one option – noodles – and we were happy for the warm broth.

The previous day's climb had been a hefty one but we were looking forward this day to an immediate and steep descent. It can be a bit difficult to get moving and wake up on cold mornings. This lethargy can be seriously compounded when the entire day's itinerary revolves around exercise. 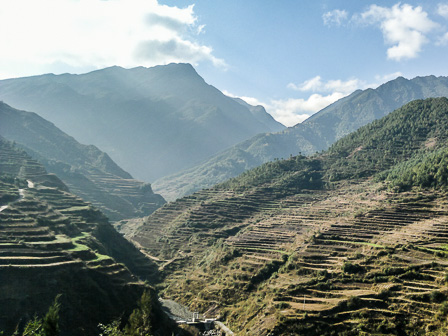 There was no problem shaking off sleep though. Following breakfast we screamed downhill through straightaways and turns. Our eyes teared-up due to the combination of wind and cold. We took a short break halfway down the mountain and stopped at an overlook to snap pictures and enjoy the view.

Below us we could see the ribbon of a river and a small cluster of houses at the edge of a crossroads. Once we arrived at the junction we found the houses were owned by an Yi family. They graciously unlocked an unused majiang room and we threw our bags down on the floor.

It was still early and the goal for the day was not only to cycle to the next town, Tangdan (汤丹), but also to hike around Jiaozi Snow Mountain (轿子雪山). We were hoping for enough time to find base camp on the 4,247 meter massif. Unfortunately, Tangdan was in one direction and base camp in the opposite. We had to be quick.

We pointed our bikes northwest and headed back into the hills lining the Chahe River (岔河), riding up through the valley. Rid of much of our ballast we made good time. The road was midway up the mountains. Terraces and small villages sat above and below us as we rode. 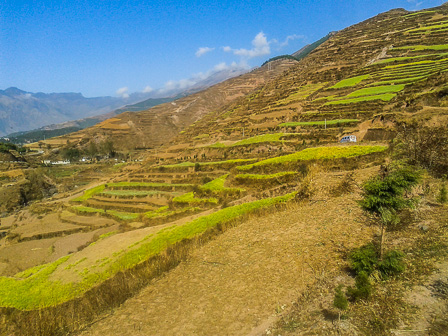 For several kilometers the land was nothing but farms. There was no suggestion of industry as we made our way uphill through villages. Dogs in the small towns we passed through were a slight annoyance but nothing too concerning.

We had settled into the hypnotic monotony of pedaling forever uphilll when a series of booming noises brought us out of our trance. Around a curve on one of the more flat areas squatted a huge quarry. The entrance was not surprisingly guarded by two stone lions with red sashes draped over their shoulders. 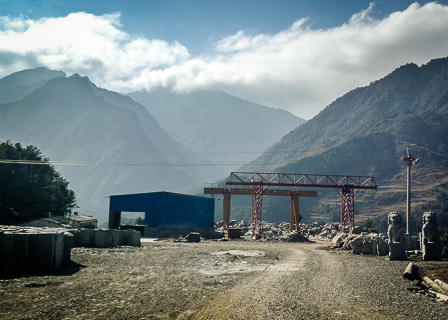 Quarries ruin the best of views

The scenery had, up to this point, been fairly idealic — we had passed above a rural school where the children were outside in a square singing and dancing — but the quarry was truly a blight on the landscape.

Rock tailings from the mill spilled unpleasantly down the adjacent hillside. Everything in view was a vibrant green or ruddy brown — natural colors. The hillside below the quarry was, for hundreds of meters downslope, gray and ruined with discarded boulders and the dust of thousands of machine-carved statues. We quickly pedalled away. 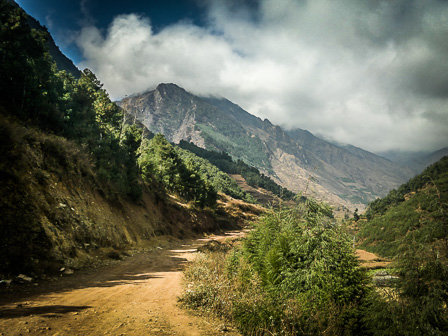 The sun had burned off the morning mist and the temperature was gradually rising as we coasted toward a guesthouse our friend Fried had pointed out on a map. Although large and built for some dimly expected boom in hiking-based tourism, the guesthouse was empty.

It was not simply lacking for business. From what we could tell the entire building was deserted. Farm equipment lay strewn about the lobby and the only brochures, many of which were scattered on the floor behind a disused reception desk, were dated 2011. 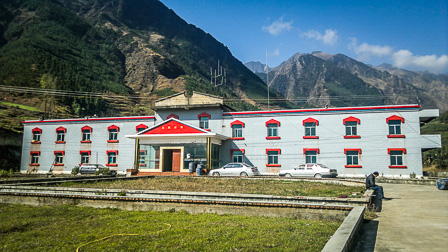 Cars but no people at the hotel

The smell of cooking wafted from another building in the same walled complex and got our hopes up for lunch. The staff quickly piled leftovers from a just-finished lunch into clean bowls and informed us any meal would run 50 yuan per person. They also told us we could stay at the hotel for 30 yuan a night.

Back outside, hungry and slightly angry, we decided to forego lunch and begin our hike through the Jiaozi Snow Mountain Scenic Area. We had no planned route and no map, although we had seen what looked like fairly well-maintained trails online.

We left our bikes locked together inside the hotel complex and set out. Walking was a nice change of pace from being on our bikes. The path, more of a rutted service road, was easy to follow as it wound up into the hills. 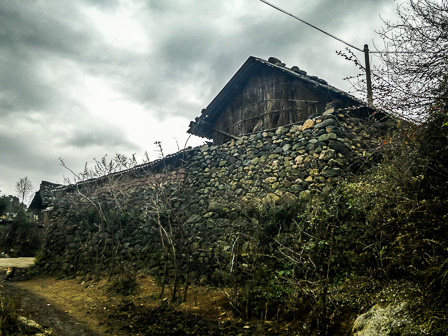 Villages went backwards in time as we progressed. Cinder block architecture gave way to houses built of stone and finally to simple mud brick affairs with the occasional, and incongruous, satellite dish mounted on a tiled roof.

The weather had been clear and warm when we left our bikes. Very quickly it began to turn for the worse. Winds started to sweep down out of the hills and billowing gray clouds crested the mountains to the northwest. The skies continued to darken as we made our way toward Jiaozi Snow Mountain. 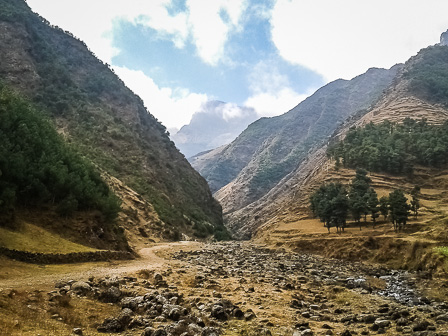 From a distance we had glimpsed the peak but now it lay shrouded in the thickening clouds. The path led up and across a burbling creek. We could see the path clearly enough and it seemed to lead directly to the slopes of our intended destination but the mountain was much further away than we had expected. It became apparent very quickly that our goal of finding base camp, located on the other side of the mountain, was not possible in the time we had allotted.

The combination of weather, time-constraints and increasingly vocal bellies persuaded us to turn back. Our plans, however sketchy, had not really allowed for more than a few hours on the mountain. As it was, we didn't even make it through the foothills. 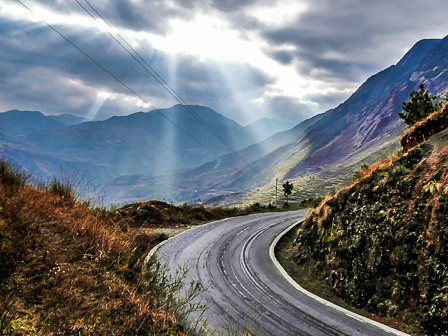 We returned to find our bikes locked behind a three-meter high gate. A woman ran up to us with the key, saying she would be happy to unlock the gate if we each payed five yuan to get inside. We gathered our bikes, gave the woman a total of five yuan, grunted something about manners and began to retrace our path.

Back at the crossroads we found our bags where we had left them and no one asking for a fee to release them. The Yi family thankfully had a restaurant situated behind their home and we ate our long-awaited lunch. It was delicious. 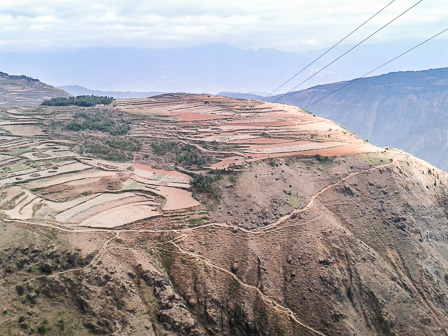 Our meal finished, we set out for Tangdan. The town was still 35 kilometers, and a steep climb, away. The nasty weather had followed us and cast a hazy pallor over the landscape. The road toward Jiaozi Snow Mountain had passed largely through farmland and young forest. Now, heading in the opposite direction, vegetation began to thin out noticeably.

Through the omnipresent haze we could see layers of mountains stacked like ever-darkening piles of fabric on the horizon. As we approached Tangdan, the marks of industry became more and more visible. Traffic on the road was steadily increasing as well but never amounted to more than a trickle. 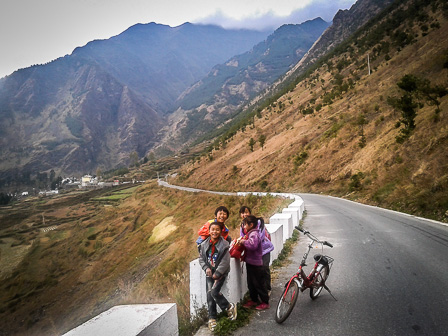 These kids followed us up the mountain, obviously in better shape than we were

Terraced farms and little villages persisted but became few and far between. Patches of trees clung stubbornly to some mountain faces but the slopes were steep, gouged and rutted. Here and there the red earth reemerged but the land was mostly a dull yellow interspersed with rocks.

The area we were riding through has been compared to the Loess Plateau (黄土高原) in north-central China and we were beginning to see why. Similarities between the two places are striking, although we could see nothing resembling the conservation efforts underway along the Yellow River. Erosion and debris from mining along the road to Tangdan

Mines of differing intrusiveness were evident by the scars and debris spilling down the hillsides. The area is rich in coal, gold and especially copper, and despite hundreds of years of exploitation, miners still toil away in the darkness under the mountains.

The last rays of the setting sun played tricks through the canyon. In the sun temperatures were fairly warm but rounding corners into shadow was a continual shock. As shadows grew along the eastern side of the valley we began to pass a series of tunnels. The longest of these was completely unlit and seemed incredibly treacherous on occasions when two vehicles had to pass. It was also conveniently lined with foot-deep gutters that were invisible in the gloom.

Caves began to appear along the roadside as well. Inside they were, perhaps predictably, filled with discarded cigarette butts and other trash. They stank decidedly of urine. Strange doors with no discernable purpose hung from hinges bolted to rock faces. We arrived shortly before dusk in Tangdan. Two of us had ended up hitching a ride with a passing van — tired legs and approaching dusk forcing us to take the easy way. The other three riders arrived at different intervals as the sun faded. We followed the same routine as the evening before: finding a hotel and taking quick showers before eating a gigantic meal.

We took a walk around town, which was surprizingly busy despite the cold and dark, and then returned wearily to the hotel. We had travelled 70 kilometers and our GPS claimed we had climbed a total of 3,600 meters on the day. Exhausted and chilly, we settled in for the night. Nice area. I've only been up there by public bus and motorbike, about four years back, but also had a great time.

Really nice map there ... how'd you make the base-layer (ie. not the I-guess-it's-a-GPS red line?)

Thank you for the great words and pictures!!

This looks awesome! I'm moving to Kunming in February and would love to get in on a ride like this one. How often do you all do this?

Base layer is Google Maps' terrain layer. I created the colored elevation contours by hand based on Google's (non-colored) base data. The red line was traced based on the roads layer, then altered to correct for the displacement that China orders for all of Google's maps in China