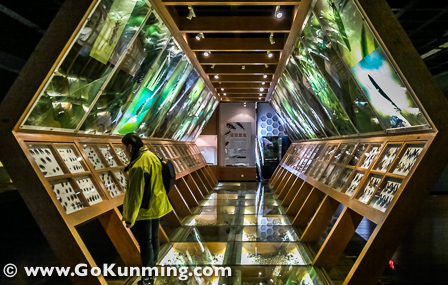 GoKunming first visited the city's Natural History Museum of Zoology (昆明动物博物馆) when it opened in 2006. We recently returned to see how the museum was holding up after six years.

While many Western museums seem designed to funnel traffic through gift shops, the Museum of Zoology simply has a modest table inside the front door with rows of plastic dinosaur toys.

The entryway is lined with taxidermy animals that currently inhabit, or once lived in Yunnan. Specimens include birds, dogs, various domesticated animals and a sad-looking black bear missing a paw. Across the room a large placard explains evolution and marks major periods of animal extinction. 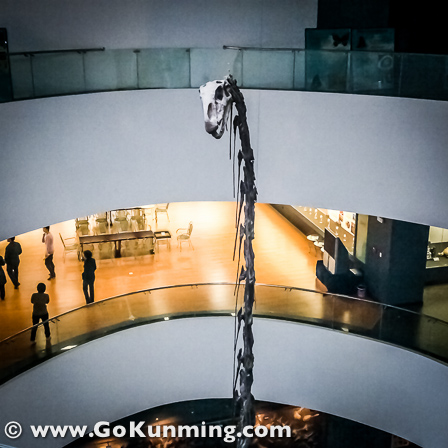 Mamenchisaurus was all neck

Around the corner from the birds and mammals is the museum's centerpiece – the skeletons of three dinosaurs discovered in Yunnan's Lufeng County. The two smaller skeletons are actual bones, while the other is a cast recreation.

The largest of these is Mamenchisaurus (马门溪龙), a sauropod that curators have posed standing on its hind legs. The dinosaur, which lived approximately 160 million years ago, towers more than three storeys above the first floor and dwarfs anything else in the building. 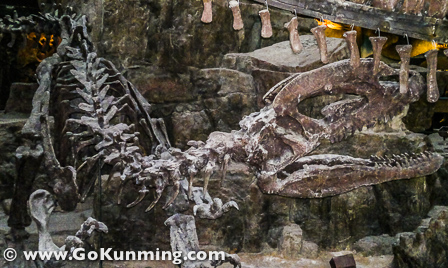 Below this massive skeleton, Dilophosaurus (双脊龙) attacks
Lufengosaurus (禄丰龙). Although not historically accurate — the three animals lived during distinctly different Jurassic ages — the display is impressive.

The first floor of the museum also contains fossilized dinosaur eggs and interactive displays showing the muscle and bone structures of several different 'terrible lizards.' Many of the interactive computer exhibits were turned off when we visited but museum workers were happy to plug them in and show us how they worked. 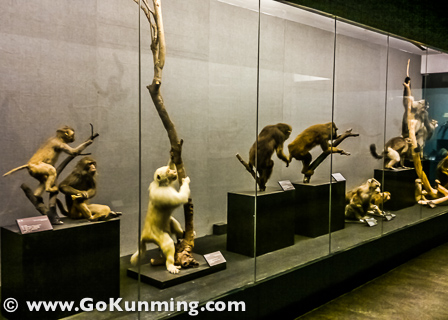 We walked upstairs and found the second floor packed with animals. More than two dozen species of monkeys sit behind glass frozen in different states of action. Some of these specimens, like the white-handed gibbon, have recently disappeared from Yunnan and can now only be found in museums.

There is also a tremendous collection of insects housed inside a raised hexagonal walkway. The meticulously pinned and framed arrangement includes beetles, butterflies, ants and the largest walking stick we have ever seen. 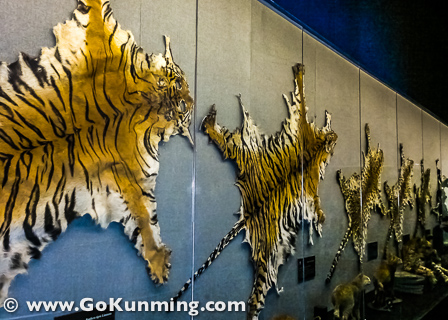 The third floor contains more mammal displays, including the pelts of several different tigers and other seriously endangered cats. There are also fish and amphibian exhibits. One of the more interesting rooms contains scenes showing animals native to Yunnan in their natural habitats. The red panda exhibit is one of these, and combines landscape murals with plant specimens to recreate a life-like mountain scene.

In a darkened corner we found the jungle walkthrough. Trees draped with vines cover a pathway lined with well-hidden animals. The lights weren't turned on and we groped our way through with cell phones held in front of us like torches. The path eventually leads to a cave where the displays have been removed. 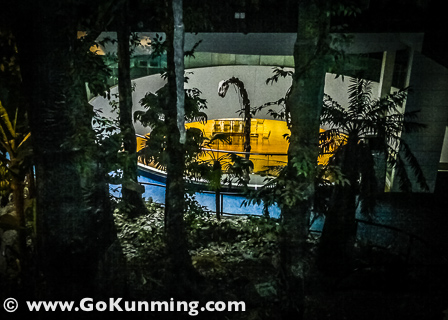 A view of Mamenchisaurus from the jungle exhibit

We returned to the lit part of the museum and stared eye-to-eye with Mamenchisaurus before we left. On our way toward the exit we passed several enthralled visitors being led through the building by a tour guide. Perhaps we should have asked for one ourselves.

Although the museum is not world class, it offers an interesting window on the past and present animals of Yunnan. It would make an ideal place to bring children and introduce them to the science of zoology. 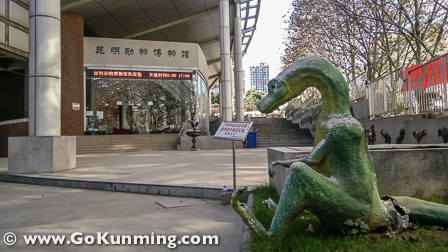 The Kunming Natural History Museum of Zoology is open from 9am-5pm daily but closed on Mondays. Admission is 20 yuan. Chinese-language tours can be arranged in advance by calling 5199680. The museum is attached to the Kunming Institute of Botany and is serviced by the 146 bus at the Baiyun Lu Xikou stop.

i took some of my students there earlier this year and they loved it! they spent ages putting coins in an electronic dinosaur that 'lays' eggs (which are actually bouncy balls). it wasn't easy to find or to get to though and is quite well hidden.

i had no idea this place existed. another useful article by gokunming. thanks.

There was a blink-and-you'll-miss-it refernce about a year ago...
gokunming.com/[...]

...well my comments were a year ago. I see the original article was considerably longer ago!