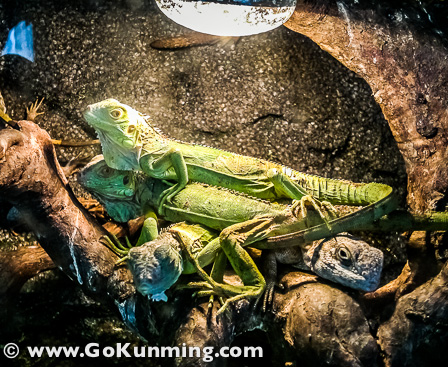 Kunming's original Bird and Flower Market in the city center was once so popular that it grew into adjoining neighborhoods and became a labyrinth of tree-lined lanes and alleyways. Visitors to the market could buy everything from parakeets to samurai swords. Less than fifteen years ago gorgeous old buildings still occupied space in and around the market and the area was a must see for tourists passing through the Spring City.

Those days have seemingly passed. For most of the last decade the once-thriving Bird and Flower Market has been dying a slow death at the hands of soaring real estate prices and successive urban renewal projects. The area where hundreds of family-owned shops and some centuries-old houses used to sit has largely been demolished. The remodeled and disjointed market looks nothing like it once did and still suffers from perpetual construction. 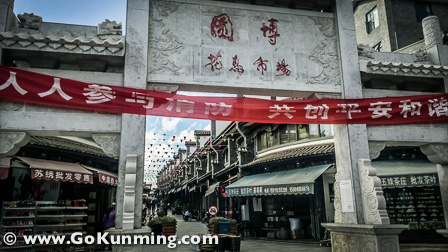 Perhaps in an attempt to recapture the glory days, real estate developers built a new incarnation in the north of the city. The Yuanbo Bird and Flower Market (园博花鸟市场) first opened for business in 2008. Much like its predecessor in the city center, it is a sprawling affair. There are numerous pedestrian streets, all of them lined with identical three-story buildings that would not look out of place in Dali or Lijiang.

The main entrance to the market is off of Yuanbo Lu, just behind the Shibo Jixinyuan bus stop (世博吉鑫园公交车场). Shops near the gate carry the usual assortment of teas, jade jewelry, marble and mass-produced landscape paintings. 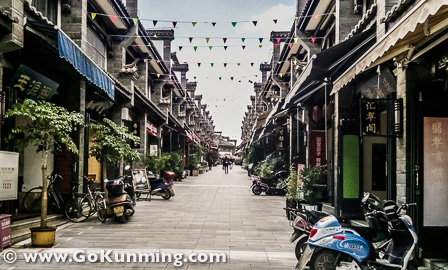 Lanes leading away from the gate slope slowly uphill and eventually converge at the market's sunken main square. We followed the walkway to the left and ended up in the plant section. Thousands of plants were packed to bursting into dozens of small shops. The path between storefronts was often blocked by groups of shoppers or outsized plants on display. 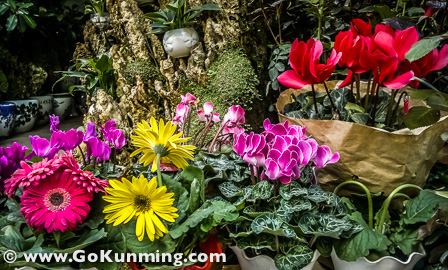 Interspersed throughout the bonsai trees, flowers and houseplants are racks of cages — some crammed full of brightly colored songbirds, while others contain larger solitary birds that barely fit inside their cages. The number and variety of birds available is quite diverse and may have been even more so before a raid on shops selling endangered animals occurred earlier this year. 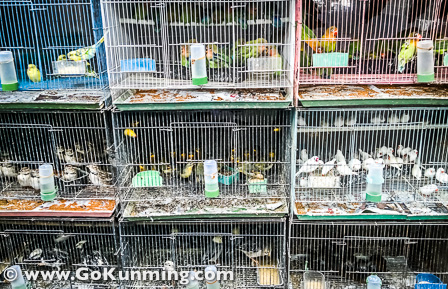 The walkway loops around to connect back with other avenues that eventually converge on the main square. Shops lining the square sell huge ornamental furniture carved from single pieces of wood. Curiously enough, large, ordinary-looking rocks were also on sale. We were told these are 'gambling stones' (赌石), that may or may not contain high-quality jade. 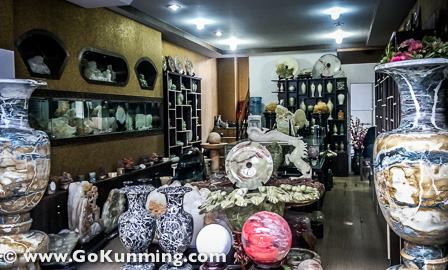 Toward the back of the square is a food court which sells take-away meals and barbecue. A quick stroll through the restaurants led us to the animal portion of the market.

The first darkened store we ventured into contained hundreds of animals housed in terrariums. The owner assured us that none of the snakes, iguanas, monitor lizards, turtles, frogs or spiders he sells are endangered or venomous. The last claim seemed a bit far-fetched as we gazed into a glass case displaying dozens of different species of scorpion. 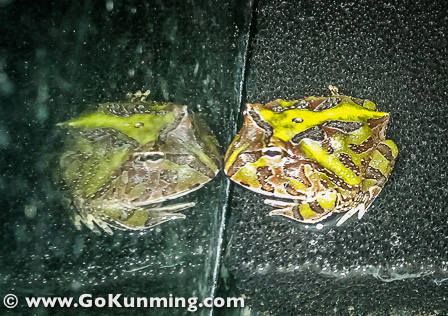 Some of the amphibians and snakes appeared to glow under their heating lamps and a chameleon turned bright orange as we approached its terrarium. The shopkeeper seemed especially proud of his collection of tiny frogs. The one pictured above was smaller than a one yuan coin. 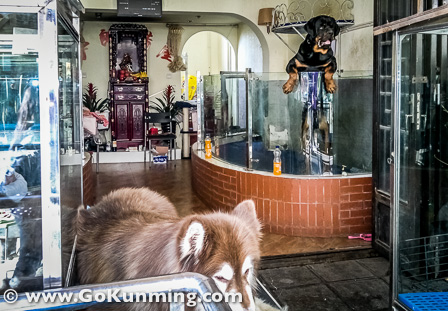 We left the shop and were immediately struck by the sounds and smells of dogs. The market has hundreds of dogs living in various kennels and plexiglass enclosures. They range from the tiny dogs seen everywhere in Kunming shivering or hiding in purses to huge Rottweilers slobbering in expectation of a pat on the head. The few cats on display amidst all the dogs looked miserably out of place. Before leaving we passed through another area filled with flowers and stopped to admire one of the largest orchids we had ever seen. We were quickly enveloped by a crowd of camera-happy tourists and decided it was time to go. 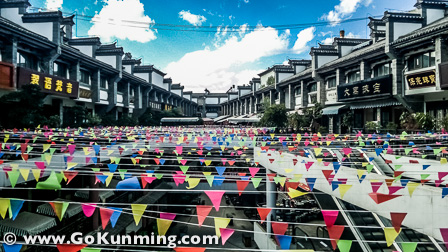 Nice article. It's a fascinating place and, when I went there, largely empty of customers. Maybe it gets busier at the weekend?

It's relatively new (1 year old as opposed to many) and further out. It does get busier on the weekends, but much of that is concentrated in restaurant row. If you're ever in the vicinity, definitely worth a hour stroll.