By Patrick Scally in Travel on November 1, 2012 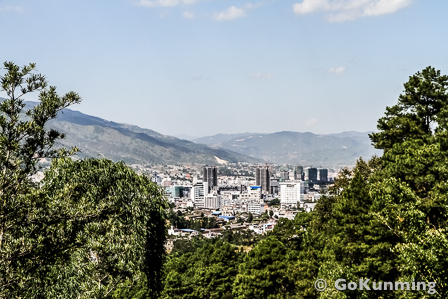 Leafing through the Chinese-language Lonely Planet guide to Yunnan, readers may notice a conspicuous omission. One of Yunnan's 16 prefectural level cities is missing. In a book running to almost 500 pages, packed with maps and travel hints, Lincang (临沧市) is mentioned on a grand total of zero pages.

GoKunming recently headed west toward Myanmar to see if Lincang really is a black hole with absolutely nothing to recommend it. What we found upon visiting Lincang and its surrounding mountains was a slightly incongruous place — a modern, centrally-planned town seemingly dropped at random into the countryside where the Hengduan (横断山) and Nu (怒山) mountain ranges meet.

Lincang is a small town trapped in a big town body. Six absurdly large roads intersect at right angles in the city center. All of them are six or eight lanes, flanked with bicycle lanes and ten-meter-wide sidewalks. The scope is enough to make drivers and pedestrians accustomed to Kunming traffic jealous. 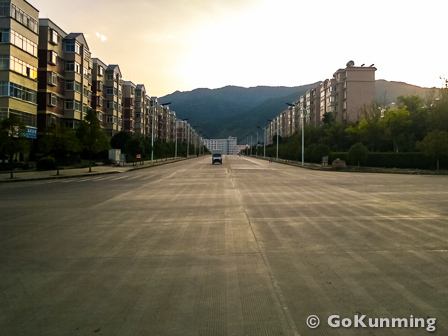 One of Lincang's streets during rush hour

The buildings along these roads are all newly constructed high-rises with fresh coats of paint fronted by recently planted trees. Locals told us that only two years ago the town bore little resemblance to how it appears today.

Shopping options are beginning to fill in the vacant commercial spaces on the first and second floors of this area but there are still plenty of empty storefronts. For now, baijiu stores and restaurants are the most common businesses. Lincang's transformation from sleepy country hamlet to someone's idea of a boom town is still in its infancy.

Perched on hills at the southern end of the city sits the older part of Lincang. There, businesses are more established, trees are taller and people more closely packed together. Alleys lead off of streets and into a warren of twisting lanes that often dead end at someone's doorstep. 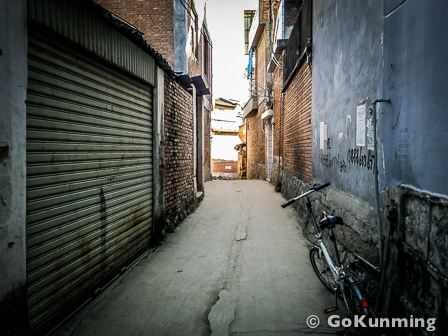 We had borrowed fold-up bicycles from a friend and their wobbly pedals and slightly bent frames were more than up to the task of exploring the town from one end to the other. Because of its wide boulevards and general lack of traffic, Lincang is incredibly bicycle friendly.

The nearby mountains are full of dirt trails as well and a five-minute ride in any direction leads out of the city to great mountain bike terrain. Bikes in good condition are available for rent from the friendly people at the Ronghui Bicycle Club.

After exhausting the possibilities of the older section of town, we rode along the Xihe (西河), a small river flowing through the northwestern outskirts of Lincang. A thin ribbon of park stretches for a few kilometers along both sides of the river.

The park has an excellent bike path that was empty despite the glorious weather. While taking a break from pedaling, we stopped to watch a family of water buffalo lumber slowly down the river, egrets perched on their backs. 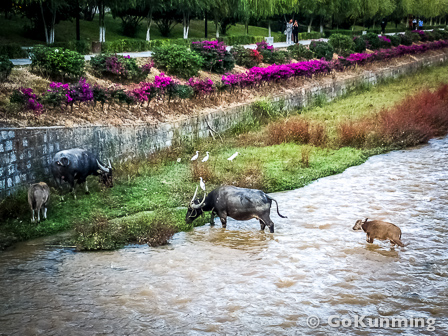 The sight of animals, especially ones as big as these, wandering unattended through town came as a bit of a shock. Less than 100 meters away to the north a cluster of huge construction projects rose in stark juxtaposition to the pastoral scene on the river.

Lincang has several other public parks and all of them are in good upkeep, but sadly lacking in water buffalo. The most curious of these, West Gate Park (西门公园), is a traditional park with bonsai trees, a time-worn pagoda and, strangely enough, water rides.

Hungry from cycling, we considered our options. Lincang is home to people from the Dai, Wa and Yi minorities and dining choices are plentiful. We joined some local friends at the Youli Jinwang Dai Restaurant (优利金旺傣味餐厅).

The courtyard-style eatery has both indoor and outdoor seating. We chose to sit outside, which in the end did not matter as the power failed promptly at dusk. Electricity or not, our food continued to arrive until the table was covered with dishes. 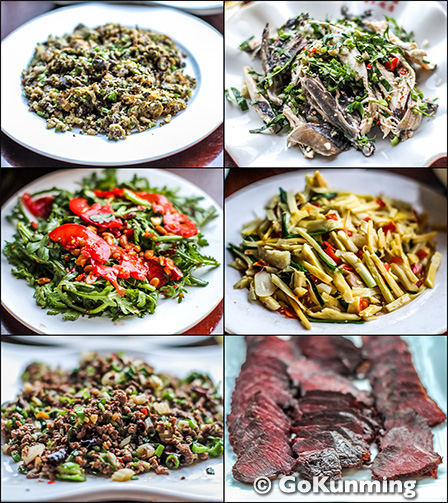 The next day, still a little woozy from the previous night's paojiu, we went to Salvador's Coffee House for a caffeine fix. Lincang's version of the Kunming institution is employee-owned and serves many of the same dishes as its Spring City cousin, with the notable addition of pizza.

After lunch we decided to get out of the city and explore the mountains. We took a ten minute cab ride up into the hills to a bluff south of town. The paved portion of the road ends at the Lincang Martyr's Cemetery (革命烈士墓地). 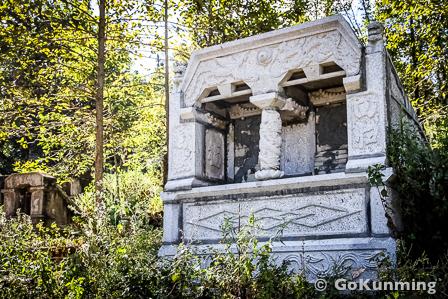 The cemetery contains hundreds of above-ground graves and a beautiful grove of trees shading stone benches and tables. After exploring the grounds for a bit we descended back to the main entrance.

We were about to set out on a hike through the mountains when a smiley man invited us on a spur-of-the-moment tour of a long brick building. We hesitated and asked what the building was used for before stepping through the door. "Ah, we burn people here," he responded pleasantly. And thus ended our accidental tour of Lincang's crematorium.

We retreated to a winding path that led steadily upwards into the mountains. Villages along the path were often simple mud brick houses shared by extended families and patrolled by scruffy-looking dogs. The midday sun was beaming down and many villagers were taking a break from work. 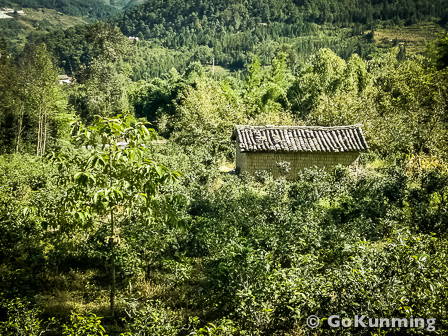 Tea trees and a storehouse outside of Lincang

Lincang villagers' incomes are often dependent on the highly volatile tea market and life in the hills is not easy. The midday rest we witnessed was a small respite to what we could see was a difficult daily routine. Later we saw how labor in these villages was divided — subsistence farming for women and chiseling cemetery headstones for men.

The hike took us past more graveyards and gave way to views of mountainsides covered alternately with dense forest and small tea farms. Somewhat friendly dogs would drop into line behind us as we hiked, often turning away to follow old men travelling in the opposite direction carrying buckets of water on shoulder poles. 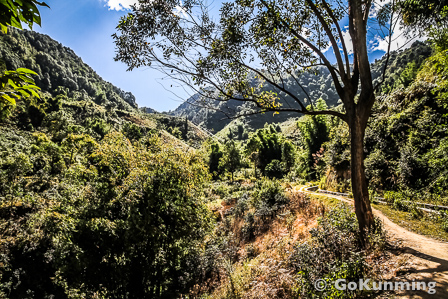 No matter how far into the mountains we hiked, we never found the spring where locals were drawing their water. The path wound on and the sun began to drop toward the mountains. Reluctantly we turned around and retraced our steps back toward the cemetery.

That night we sat outside after another wonderful dinner and stared up at hundreds of flickering stars. Upon hearing we lived in Kunming, our waitress mentioned that some people found Lincang quite boring and asked if we missed the Spring City's hectic pace. 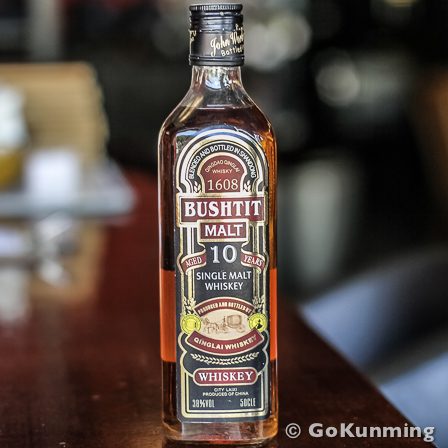 One of the fine liquors on sale in Lincang. Do not buy this.

Overnight sleeper buses to Lincang leave from Kunming's West Bus Station (西部汽车客运站). Tickets cost approximately 185 yuan depending on which bed you choose. The trip takes between nine and twelve hours. Please note that overnight buses are now required to make a two hour stop from 3-5am, ostensibly to let the driver rest.

Buses returning to Kunming leave from Lincang's Long-distance Bus Station (临沧客运站) on Nantian Lu (南天路). The return trip to Kunming takes somewhat longer due to the aforementioned stop as well as a midnight security check.

Lincang city was my first home in China back in 2005 and I really fell in love with Yunnan here. I just found an old video I made back then of riding to school and put it up (warning: shaky cam)

Information for flights between Kunming and Lincang was originally omitted from this article. It has been added.

Cangyuan is on the Myanmar border, home to the Wa nationality (佤族), and hosts the annual mud-throwing festival (摸你黑).

Wengding is a Wa village in the mountains above Cangyuan. The houses are made of wood and thatched roofs. It's not authentic. The government gave the residents money to rebuild their houses in the traditional manner 5 years ago, and now there's a 50 yuan fee to enter the village. However, since the traditional Wa architecture is difficult to find these days, Wengding is still an interesting place to visit.

Gengma is home to the Dai and Wa nationalities. The small city is surrounded by beautiful hills, mountains, and flowers. There's a terrific spicy shrimp restaurant.

Although Mengding is technically only a "town" within Gengma county, it's actually much bigger and busier than Gengma county seat. It's set in the fertile Nanting River (南汀河) plain, at a far lower altitude than Gengma county seat, so it has a hot an tropical climate. Many Dai here, and many Burmese traders as well, thanks to the Myanmar border just 20 km away. The town itself has a very southeast Asian vibe, with lots of tropical fruit, and Burmese food. Waterfalls outside of town are a popular hangout spot for local teenagers.

Nansan (the county seat of Zhenkang County), is in a semi-tropical valley 1000 m above Mengding and the Nanting River valley. It is surrounded by massive karst formations. The old city is a Dai village. The new city is growing like gangbusters. Due to its location right next to Myanmar, the local government wants to turn Nansan into a major port, boasting that it's closer to Kunming than Ruili or Daluo.

Fengqing is a county seat on the old tea horse road. The old city is set on the hill above the new city, with lots of historic architecture and temples.

Lushi is a town on the old tea horse road. It used to be a transit point between Kunming, Dali, Lincang, and Baoshan, but today it is very isolated and one of the best preserved secrets in Yunnan. It boasts an astounding collection of historical buildings, all on cobblestone stepped streets up and down the side of the mountain. The old town is pedestrian and horse only, and there are as of yet no tourist-themed guesthouses.

In 2008, I stayed one day in Lincang. The city just had no big difference from any others in Yunnan. The runway airport was build in middle of a mountain. Probably the hot spring hotel outside the city is worthwhile to try, the water contains so rich minerals that feels like liquid soap. Just hope that they have fixed minor electricity leakage in the pool!

I second Cangyuan and Mengding.

Cangyuan has loads of neolithic paintings nearby, some traditional Wa villages, and a huge cave.

Mengding has the only maintained ming-era administrator's home I'm aware of in all of Yunnan, and it has been turned in to a great little museum.

English is not good！