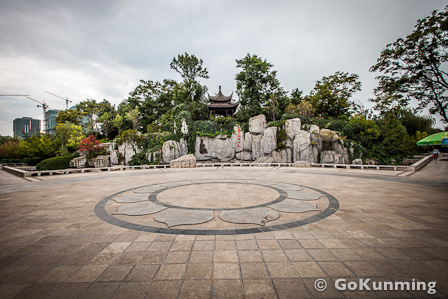 The park entrance off Xuefu Lu

Nestled between thoroughfares Yieryi Dajie and Xuefu Lu, Lianhuachi Park is an often overlooked sanctuary in the heart of Kunming. Although roughly the same size as Green Lake Park, Lianhuachi seldom sees crowds of any size.

In addition to being lovely and relatively empty most of the time, the park possesses arguably the most intriguing history of any still-existent place in the Spring City. Some very interesting people have visited or lived in the area famed for its five underground springs.

Originally referred to as Cold Spring (冷泉), the area was later called Dragon Pool (龙池) before acquiring its current name, which means Lotus Pool. The first mention of the name Lianhuachi (莲花池) was in the Dianzhi (滇志), an ancient history chronicling the Dian Kingdom.

Lianhuachi became private property in the 17th century when it was appropriated by infamous general and Machiavellian genius Wu Sangui (吴三桂). He turned the grounds surrounding the springs into a pleasure palace for his concubine Chen Yuanyuan (陈圆圆). The story of how Wu and Chen ended up in Kunming deserves some background. 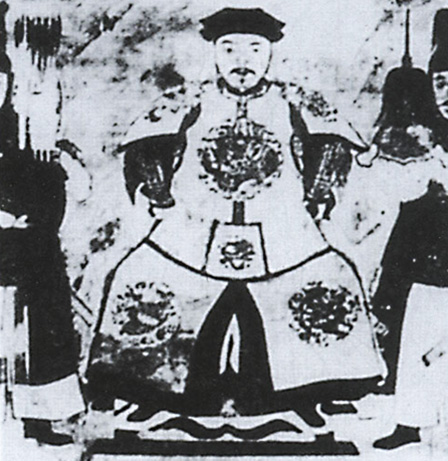 While serving as a general for the Ming Dynasty in 1644, Wu opened the gates of the Great Wall at Shanhaiguan (山海关) to invading Manchurians. This was apparently revenge for the sitting Ming emperor kidnapping Wu's concubine Chen. Once the gates were opened, Manchurian soldiers had unfettered access to northeastern China and they soon overthrew the Ming and established their own Qing Dynasty.

The Qing government rewarded Wu for his collaboration at Shanhaiguan by naming him "King of the Peaceful West" (平西王) and giving him control of Yunnan.

Once established in Kunming, Wu captured Zhu Youlang (朱由榔), the deposed Ming emperor's grandson. Zhu was fleeing Qing forces and was en route to Myanmar when caught. According to legend, Wu killed his hostage and buried him where Lianhuachi Park is today.

While the new Manchu rulers of China were figuring out how to rule the vast Han territory they had acquired, Wu spent more than 25 years in Yunnan enjoying large subsidies from the Qing government. With some of that money, Wu constructed a villa at Lianhuachi for his concubine Chen. The couple named it and its gardens Anfuyuan (安阜园). 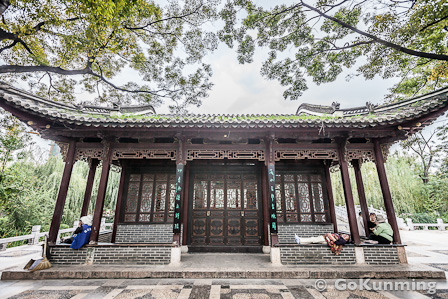 Wu would go on to rebel against his Qing paymasters and eventually conquer Sichuan and Hunan before dying in bed in 1678. No one knows what happened to Chen after Wu died, but there are several apocryphal accounts.

The most popular of these stories say that Chen was so overcome with grief upon hearing the news of Wu's death that she drowned herself in Lianhuachi. When Qing forces later occupied Kunming to put down the deceased Wu's rebellion, they burned Anfuyuan to the ground, sparing only its gardens.

For nearly two and a half centuries the gardens remained in varying states of repair until the British government leased the grounds in 1911. British officials built an embassy near the springs and turned the gardens into a hunting park. 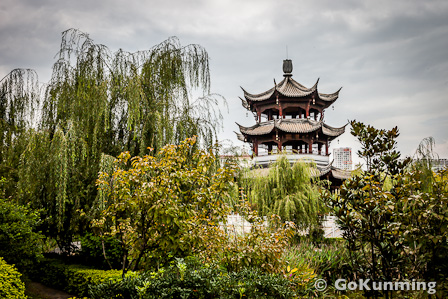 During the Cultural Revolution several factories were built around the park and perhaps not coincidentally, the underground springs that had made the park famous for centuries ran dry. Waste water and garbage from the factories was dumped into the pool and maintenance on the park grounds ceased.

The park was closed in 2007, the pond dredged and drained, the grounds landscaped and the buildings renovated or rebuilt. It reopened in 2008 and today is an oasis of calm surrounded on three sides by highrises under construction. 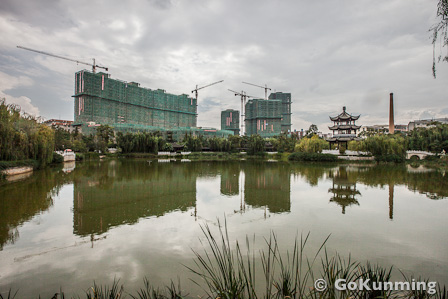 A walk around the park

The main entrance at the corner of Xuefu Lu and Minyuan Lu opens onto a large square and rock garden with the park's name emblazoned on a boulder. Above the rocks sits Lanxiuting (揽秀亭), a pavilion accessible by several well-maintained paths. It had started raining when we arrived and we took shelter with several other visitors who were playing a fierce game of cards under the eaves of Lanxiuting.

Once the rain let up, we followed the paths through the beautifully manicured park and came to Anfuyuan. Unfortunately the grounds of the rebuilt villa are not currently open to the public. We turned and crossed a wide bridge over wetlands that lead from Anfuyuan to the park's centerpiece, Lianhuachi.

The pool is ringed by flowering trees and small wetland areas bursting with ornamental shrubs. A three storey wooden pagoda stands at the western edge of the pool and we headed towards it to investigate. On our way to the pagoda we passed a padlocked tea house that would have provided wonderful views of the park had it been open. 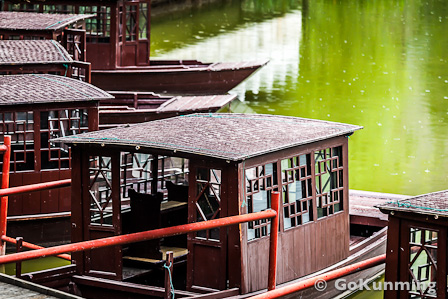 Beside the teahouse eight boats with thatched canopies sat moored and unused. A boardwalk leading to the boats was blocked off with red tape — a shame as a cruise around the calm lake would have been wonderfully relaxing.

We continued on to the pagoda. A small and very old-looking stone carving sits under glass on the floor of the pagoda. There is no inscription or sign explaining the significance of the carving of an elephant and a lotus. 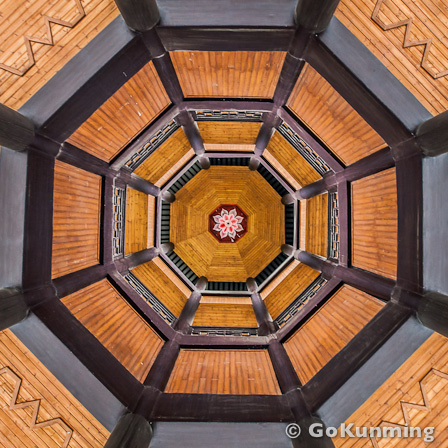 The dome of the pagoda as seen from below

Above this strange relic rises the three-tiered pagoda. Staring up into its rafters we were reminded of bagua, the eight diagrams used to represent Taoist cosmology. The pagoda is quite impressive from a distance but is gorgeous up close.

After spending some time under the pagoda we walked toward the southern end of the park to Qiao Pavilion (樵亭). There a man and a woman were playing an erhu duet. Over the sounds of the erhu we could hear other music and singing coming from nearby. We followed the pavilion's long and winding covered path, passing by elderly people knitting and reading. 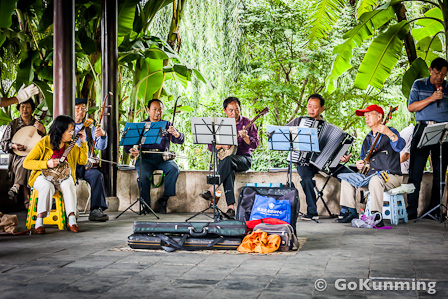 The walkway ended at another pavilion that was filled with people raptly listening to a band. Musicians played several different types of erhu, an accordion, a pipa and a tambourine, all accompanied by a woman with a lovely voice. A fellow spectator told us the musicians play everyday in the same spot, people joining and leaving whenever they like.

From there the path snakes through more trees and over a bridge before connecting to the park's Minyuan Lu entrance. The square there offers panoramic views of the park and lake. Several visitors were throwing bits of bread to a massive tangle of carp gathered at the edge of Lianhuachi below the viewing deck.

If the teahouse ever opens and the boats get put into use, the park will provide a perfect haven from the usual city madness. Those two gripes aside, Lianhuachi Park is a wonderful spot to wander around or simply chill out, and that is just what we did. 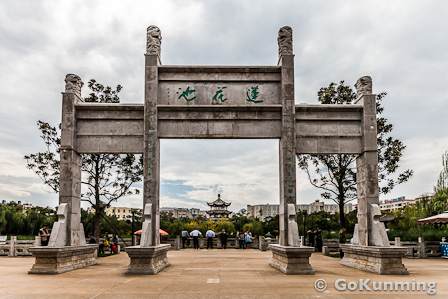 The Lianhuachi bus stop sits just outside the park on Minyuan Lu. It is serviced by the 65, 92 and 139 bus lines. The park is free to the public and is open daily from 8am until 8pm.

Getting Away: Golden Temple

Awesome article, perhaps the most informative and useful 'Around Town,' I have ever seen. I have passed by the place well over 500 times going to work and although thought it seemed interesting, never gave it a real chance. Now I can simplify this article a bit, teach my students about it as well as some great vocab in class and walk there for a field trip. Keep it up!

Sounds very romantic. especially since Wu is considered one of the most infamous traitors of China - or alternatively a classic example of how to tick off a key employee and crumble into self destruction.

The smaller North Entrance opens onto XueFuLu. As such, there are lots of other bus lines which will get you there, too. Enjoyed this article.

Thanks for the informal report. I live right next to the Lotus park.
Sometimes I do get a spooky feeling there, maybe its dark history hasn't

vanished entirely. It still remains one of the prettiest parks in Kunming though.

Very nice park and very few people even during this holiday week. Much smaller than Green Lake park and maybe why less people. Would much rather walk in this park or sit on a bench than deal with traffic around green lake.